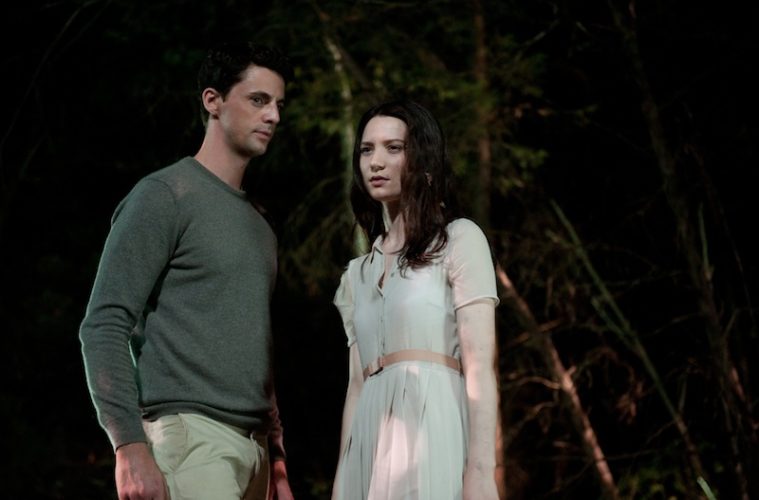 The Vampire Mythos of ‘Shadow of a Doubt’ and ‘Stoker’ Note: The following piece contains spoilers for both Shadow of a Doubt and Stoker.

Alfred Hitchcock’s Shadow of a Doubt is already available on Blu-ray, as a component of the sizeable Hitchcock box-set that was released last October. This month, however, sees its individual, standalone release on the format, and the timing couldn’t be more appropriate, for Park Chan-wook’s Stoker — an explicit reworking of Hitchcock’s 1943 small-town thriller — receives its own Blu-ray release today. At this point, comparisons between the two films have remained generally superficial, the most obvious cue being a name, Uncle Charlie, shared the by respective characters of Joseph Cotten and Matthew Goode. But a closer look at Hitchcock’s film reveals a deeper, more spiritual connection between the two works — one revolving around the vampire mythos. In this vein, then, it’s reasonable to praise Stoker as one of those rare remakes that’s able to embody both the surface elements (character names, plotting) and hidden undercurrents (the shadow world, the presence of the supernatural, incestuous desire) of an original work.

Much of the power in Shadow of a Doubt stems from its eerie, disquieting examination of the effects of blood-related ties. The film’s crucial relationship is that between Uncle Charlie (Cotten) and his niece, Young Charlie (Teresa Wright), two people bonded by name and blood. As Hitchcock shows us, they are linked on a subliminal level, too, an unconscious current that connects their thoughts, dreams and desires. And this connection is never made more provocatively than in the introductory shots for each character, two frighteningly similar compositions that simultaneously speak to character-related concerns and Hitchcock’s larger thematic interests: evil lurking in the shadows of a hyper-idealized small-town.

The opening shot of Cotten’s Uncle Charlie — which shows him lying on his bed, straight as a board — is intensely creepy for a few reasons. To start, it occurs right after a quick snapshot of comforting neighborhood activity: young kids tossing a ball around in the beautiful afternoon sun. Among other things, this has the impact of emphasizing the darkness of Uncle Charlie’s room. Why is he inside, sleeping like a log in the dark, on such a gorgeous day? If the natural state of motion for these neighborhood children is energetic activity — walking on sidewalks, playing in the street — Uncle Charlie’s preferred state is that of unnerving stillness. He likes being sheltered from the light and noise of the outside world. He’s an angry, repressed man and these qualities are implied in the rigidity of his posture; it’s a wonder that someone could nap comfortably in a suit like that. The framing of this shot, the spookiness of Cotten’s demeanor, and Uncle Charlie’s behavior throughout the rest of Shadow all link him with the tradition of the vampire. Richard Allen states as much in his book, Hitchcock’s Romantic Irony: “Uncle Charlie in Shadow of a Doubt is implicitly equated with a vampire.”[i] David Sterritt, another scholar, shares the same view: in his chapter on Shadow of a Doubt in his 1993 book The Films of Alfred Hitchcock, he writes that the film “refers to the vampire-movie tradition with surprising frequency. Uncle Charlie is like a vampire on the narrative as well as the visual level.”[ii] He also notes that, later in the scene, when Uncle Charlie gets up out of bed, he does so “stiffly, like a vampire from his coffin.”[iii] This element of Cotten’s character, though never confirmed or spoken of, nevertheless feeds the film’s tone like an infection. What’s more unsettling, perhaps, is that Hitchcock reproduces these very same visual qualities in his depiction of the fresh-faced Young Charlie, lending her a nearly identical first appearance. It should be stated that there are a few differences between the two shots: whereas Uncle Charlie’s eyes are closed and shut off from the world, Young Charlie’s are open and eager to explore; and Young Charlie’s room is lit just a bit softer by cinematographer Joseph Valentine (who shot a number of Hitchcock films before his unfortunate death in 1949), subtly making her a part of the outside world as opposed to an enclosed hermit. But the overriding feeling one gets when looking at the two images side-by-side is undeniable: these two Charlies, for the most part, are one in the same, cut from the same dangerous cloth.

This is a concept that the Wentworth Miller-scripted Stoker picks up on remarkably well, as it posits its own Young Charlie, India Stoker (Mia Wasikowska), as a superhuman, even omniscient entity. If Shadow of a Doubt expresses its vampire-informed sensibilities through Hitchcock’s expressionist aesthetic, Stoker does it through far less methodical, patient means: the restless, agitated sound design, which constantly registers whispers and hushed voices, puts us in India’s pumped-up headspace from the get-go; Chung-hoon Chung’s swirling camera communicates that same subjectivity on a visual scale; and Goode’s determined courting of the Stoker women (including Nicole Kidman’s Evelyn) makes overt many of the sexual suggestions that bubbled under the surface in Shadow of a Doubt.

It’s tempting to connect Stoker’s vampire connotations solely with Park himself, seeing as how his previous film — the rich, ravishing Thirst — was about vampires, and one unusually fascinated by the logic and rules of the creature’s mythos. Unlike Thirst, though, most of the ideas in Stoker are pure Hitchcock: an earlier incarnation of Ralph Brown’s town-sheriff character in Stoker (who meets a rather untimely end) can be seen in Shadow of a Doubt, guiding traffic and recognizing the locals; the icebox with the maid’s body, tucked away in the basement, is straight out of the haunted, secretive cellars of Notorious, Psycho, and many others; and the suave ability of Goode’s Charlie to skate by with Evelyn, to charm her with such ease and effortlessness (not to mention the way he just appears at the opening funeral), is more broadly reminiscent of countless Hitchcock-dandy villains.

Perhaps most impressive, ultimately, is Stoker’s reading of the Young Charlie character, its understanding of her next-level genetic potential. It understands a good deal of her psychology, too: much of what attracts Teresa Wright’s Charlie to Joseph Cotton’s Charlie in the first place is that he represents an outside force existing above and beyond the constricting shell of small-town domesticity. And, in the end, this outsider status is exactly what Wasikowska’s India achieves: a painful, violent escape from family life. Whereas Young Charlie is left to endure the agony of Uncle Charlie’s funeral, in which the speakers say nothing but great things about a man she knows to have been a sick killer, India — a murderer, a freak, an Uncle Charlie — is set free.

What are your thoughts on these connections between Shadow of a Doubt and Stoker? Did you notice any others?