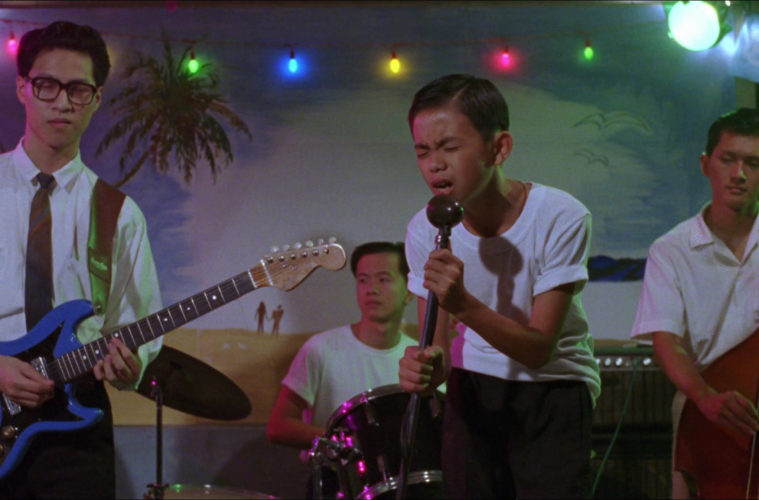 History is a misremembered lyric in Edward Yang’s four-hour Bildungsroman, as A Brighter Summer Day bridges a young boy’s personal turmoil with the larger politics of 1960 Taiwan. The young Si’r struggles in night school, attempting to avoid the teen gang violence between the island locals and Mainland transplants from the 1949 exodus. While Yang’s insistence on master shots might place him in later traditions of art cinema, this work’s novelistic unveiling of plot recalls the humanists of the 1950s like Satyajit Ray. Yang is a storyteller first and foremost, and, unlike Taiwanese New Wave counterpart Hou Hsiao-hsien, his frames speak directly and emotionally to the characters involved. These shots never pose an ambiguity as to what or where the main action of the frame should be, despite the amount of space or number of people they capture. When Si’r sits with friends, disturbed about a possible death threat he’s received, Yang smartly frames his stillness with just enough space away from the raucous kids to leave no doubt that he still dominates the image.

Yang’s stylistic choices thus always seem to capture the environments responsible for both their goodwill and especially their misfortune, even though their seeming danger — an ice-cream parlor, a tennis court, a teen concert — never suggests such a reading. The film spreads its arms wide as it follows multiple narratives, most notably the arrest of Si’r’s father by the secret police. The interrogation sequences never show the violence onscreen, using crucially placed ellipses and only his shaking, bruised hands to make us imagine what horrors could occur. And thus by the time the film reaches its shocking conclusion, the weight of society makes Si’r’s final decision feel truly inevitable. A Brighter Summer Day somehow feels laser-specific by sketching biographical details from Yang’s life to explore this key moment in Taiwanese history. The universal adolescent pains of friends, girls, violence, and family all register, but these personal waves flow out through the troubled history of a nation.

Jean-Luc Godard embraced Fuller and Lang; for Jacques Rivette, the true masters were Hitchcock and Renoir. His debut feature, Paris Belongs to Us — though the final line of the opening credits will contend that “Paris belongs to no one” — builds itself on an ironic dichotomy where the film mismatches its forceful camera with the looseness and spontaneity of its performers. The opening sequence sets the stage with forceful camera movements — a tracking shot around an apartment complex suddenly swerves in, and ingénue Anne opens the door of a fellow apartment to find a woman screaming about the death of Anne’s brother alongside other apocalyptic doom. In the next scene, however, Anne relaxes with her brother, Pierre, at a café, where she worries about her exams more than informing him of possible death. The camera relaxes, too, occasionally pushing in and out of their plainly staged seating, but not on the expected beats. Jonathan Rosenbaum describes Paris Belongs to Us as the work of an amateur, and it’s hard not to see the ideas of mise-en-scéne in multitude but a confused logic between them. The question is whether or not that precarious line registers as an authentic experiment.

Anne’s interest in a group of theater actors feels poisonous from the start, though her declarations of suspicion are never matched by the camera’s gaze. Eventually, she begins searching for a set of mysterious tapes (a classic MacGuffin) of someone who has committed suicide but never appeared onscreen. Rivette exploits the very tension of narrative, as Anne seems like a catalyst for the documentary-like interest in the acting troupe — “We need to cast dwarves. None over four feet tall!” — and capturing the streets of Paris. That it may resemble Welles’s Touch of Evil comes through its surrealist logic, with characters popping in and out of these apartments as if the city were shirking and expanding for the plot’s contrivances. Life is a stage for a performance that never happens onstage, while the only eyes caught following Anne turn out to be the drawings of the suicidal man she places in her own apartment. Paranoia and performance go hand-in-hand throughout Rivette’s career: Anne sees conspiracy because people don’t act the way she thinks they should, which is to say, suspecting a conspiracy is the suspecting a person’s actions against their intentions.

A Brighter Summer Day and Paris Belongs to Us are available from The Criterion Collection.