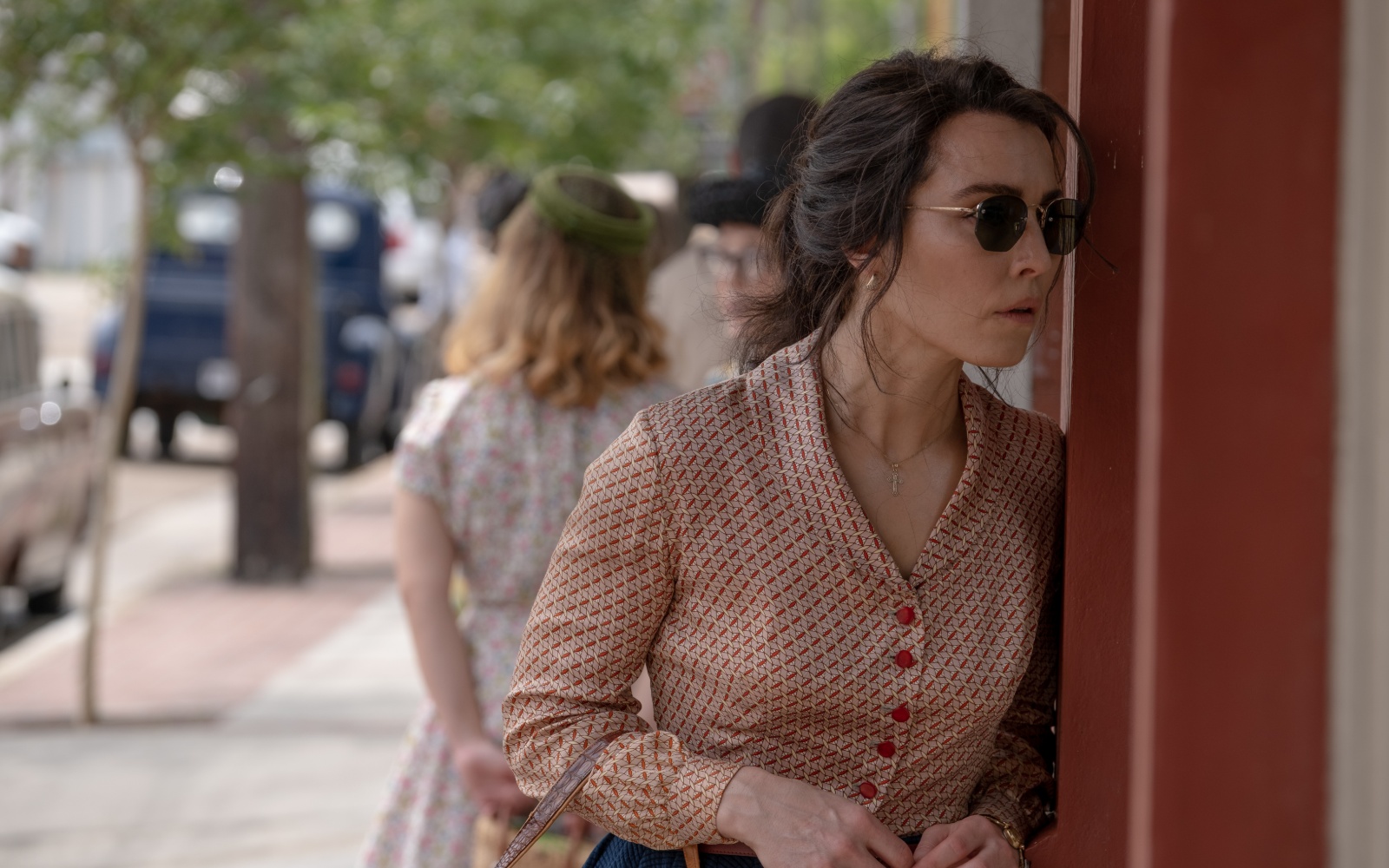 Returning to the questions of identity that propelled his 2019 spy thriller The Operative, Yuval Adler’s misfire The Secrets We Keep is a violent exploitation film that uses horrors of the Holocaust as window dressing. It ostensibly explores the lingering trauma of Noomi Rapace’s Maja, who suffered a violent sexual assault at the hands of the Nazis during WWII, only to seemingly discover her attacker is living the American dream in the very town that she now calls home. In truth, The Secrets We Keep is a pulpy mess, treating Maja’s emotional scars as a deus ex machina to showcase violent retribution. While perhaps more tonally attuned to depicting the Holocaust’s mass horrors than, say, Hunters, The Secrets We Keep is more caught up playing out Saw-like fantasies of revenge than exploring the subtleties of grief.

Living in idealized 1950s small-town America, Maja, who claims Romanian heritage, has built a stable life after WWII, marrying her American doctor husband Lewis (Chris Messina) and having a son. But while walking through the streets one day she notices a man, Thomas (Joel Kinnaman), who seemingly looks and acts exactly like her attacker years early. Having buried that trauma and lied to her husband about experiences during WWII, Maja begins following Thomas, logging the seemingly perfect life with a wife of his own (Amy Seimetz). It isn’t long before she kidnaps Thomas, trying him up in her basement and demanding he reveal his true identity as a German soldier named Karl.

Enlisting Lewis, who oscillates between reluctantly helping Maja and questioning his wife’s state of mind, the rest of the film plays out as a series of increasingly violent acts—cutting off a finger and force-feeding liquor among them. As the basement sessions ramp up, Maja begins to fill Lewis in on her history, with Adler monochromatically flashing back to Maja’s previous life as a gypsy. These on-the-nose expositional moments only highlight the awkward pacing of this relatively short film, which stuffs in subplots that are never fully realized. Further adding to the married couple’s problem, Maja befriends Thomas’s wife, who confides in her that her husband is distant when discussing his past in Europe. Seimetz brings nuance to a film that desperately needs it, but her role is quickly tossed aside for more trips to the basement.

For a film whose entire premise is built around a possible case of mistaken identity, it really isn’t important if Thomas is Karl or not (though Adler treats that answer as the climatic moment). Instead, by embodying Maja’s trauma within a singular figure, she allows herself to seek the revenge that she seemingly thought impossible. Thomas becomes a stand-in for the abuses that Maja’s family withstood, whether he is personally guilty or not. Compounding these themes, Maja reverses the traditional gender roles of her marriage, becoming the aggressor, which Lewis desperately attempts to rectify. Messina, always a good actor, sees his ability to protect his wife slipping out of his hands, losing his patriarchal grip in the process. It’d be an interesting note if it didn’t seize agency from Maja in dealing with her own agony, reinforcing masculine displays of aggression as a de facto method of coping with sexual assault.

While The Secrets We Keep brings up interesting questions about marital roles and the nature of revenge, it’s not so interested in exploring these themes, which are instead treated subtextually as Adler plays up the cyclical nature of Maja’s torture. She asks Thomas to admit who he really is, he refuses, and is then given physical punishment. These moments are repeated ad nauseam. When we finally do see Maja’s assault, it’s conveyed with the subtlety of a sledgehammer. The Secrets We Keep seems to posit that revenge is a field best left to the men, as Maja’s final act of acceptance is undone by Lewis’s attempt to recast himself as the hero of the story.

Despite these faults, Adler’s film delivers great performances from its central couple, and a standout supporting role from Seimetz. If Kinnaman is perhaps too one-note, it doesn’t seem to be a fault of his delivery but the repeated requests by the film’s script from him to scream and writhe under duress. Ultimately, The Secrets We Keep is a film in search of a more coherent message.

The Secrets We Keep is now in theaters.