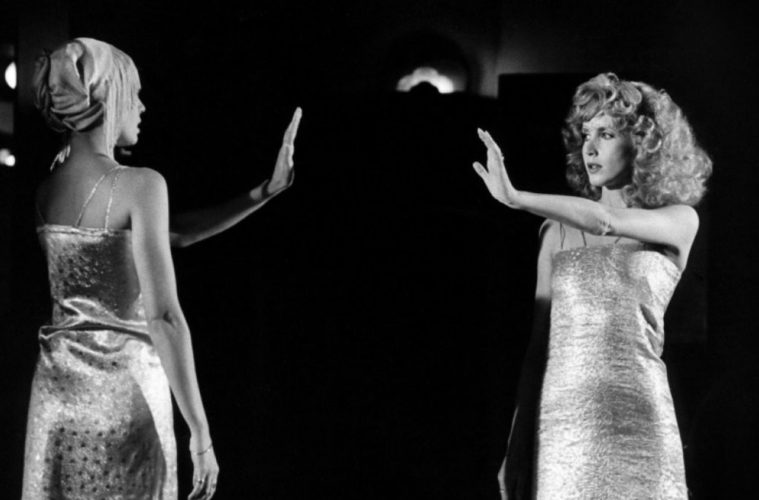 The Playful Journeys of Jacques Rivette’s ‘Duelle’ and ‘Noroît’ Two playful journeys into women’s lives — one a mystery forged in darkness, one an adventure-turned-ritualistic-requiem. Jacques Rivette’s Duelle and Noroît originally set up a four-part circle of films that were never finished. But these never-released-in-America masterpieces comprise his most wondrous ode to classical Hollywood, each based on a forgotten text. In Rivette’s own obsessive mise-en-scéne, their fantasies are grounded through realism, constructed worlds where the camera simply documents performance.

The streets of Paris remain conspicuously quiet through Duelle, a noir-fantasy modeled off RKO’s The Seventh Victim. The frizzle-haired ingénue Hermine Karagheuz balances on a ball before coming crashing back down, and suddenly a woman gives her the task of finding a missing man (encouraged by the booming sounds of the crinkles of money overloading the soundtrack). But Rivette shifts the focus of ensuing mystery by following the criminals, circling their actions at train stations, gambling halls, and Lady from Shanghai‘s aquarium. By the time Karagheuz returns, the mystery is already too deep for her to pierce; she even jumps in fear at Jean Wiener‘s dissonant chords. The piano booms from the corner of every scene, a haunting live performance that eschews realism for “Realism” in a paradoxical way.

It only follows naturally that Duelle is less a vision of a crime mystery than the story of two goddesses battling for immortality. Rivette’s creation of this fantasy world is less dependent on envisioning a Technicolor dreamscape than focusing on the slow walk of his actors, masking shadows into unnatural beams of light, and using editing to make his characters more powerful than they look. Even during the climactic battle atop a candle-lit balcony, the sound of cars in the background reminds us that this is not Oz but still very much Paris. The mise-en-scéne always bleeds beyond the frame, even if everything seen in it has been crafted to the narrative unfolding. Duelle is Rivette at his most pure, which is to say the film never feels as if it’ll teeter out of his control. Instead, his realism is the very fabric of his fantasy.

Noroît takes an opposite approach: it’s set on a mysterious island filled with magic and pirates, and then unfolds narrative through an approach closer to documentary. Based partially on Fritz Lang’s Moonfleet, Noroît begins with Erika (Kika Markham) joining a pirate gang and becoming an aide to their leader (Bernadette Lafont), who’s unaware that the new girl is on orders from the ghostly presence of Morag (Geraldine Chaplin), taking revenge for her sister. Like Duelle, the plot can be a systematic driver of its images, a series of encounters and confrontations between characters carrying plans of friendship or betrayal, love or murder. The camera simply follows the actresses, letting their paces give rhythm to every scene.

But Duelle circles and then dives; Noroît is like swimming out of the center of a whirlpool — a rather straightforward plot (even with act and scene intertitles taken from Thomas Middleton’s The Revenger’s Tragedy) becomes obscured by its dances, its playful fights, and its poetic gestures. Annie Cohen-Solal’s free-jazz stylings set the rhythm as the group carry themselves through the ancient castle like a troupe of invisible gypsies with no concern for anachronism. The film’s final fight combines masks, continual resurrections, and sudden transitions to silent footage shot in 16mm black-and-white. Its choices feel less cohesive than purposefully abrasive. In that abrasion, though, is a director searching through a series of improvisatory choices, finding authentic moments of emotional distrust that’s often been a breeding drive for his films. “I have not fashion’d this only for show and useless property; no, it shall bear a part, e’en in it own revenge,” characters repeat over and over. It’s a calling card for the film’s director, who even finds time to re-create Hamlet’s play-within-a-play as a revelation to a character’s betrayal — the play’s the thing, for both mischief and murder.

Jacques Rivette’s Duelle and Noroît are now available on Blu-ray.