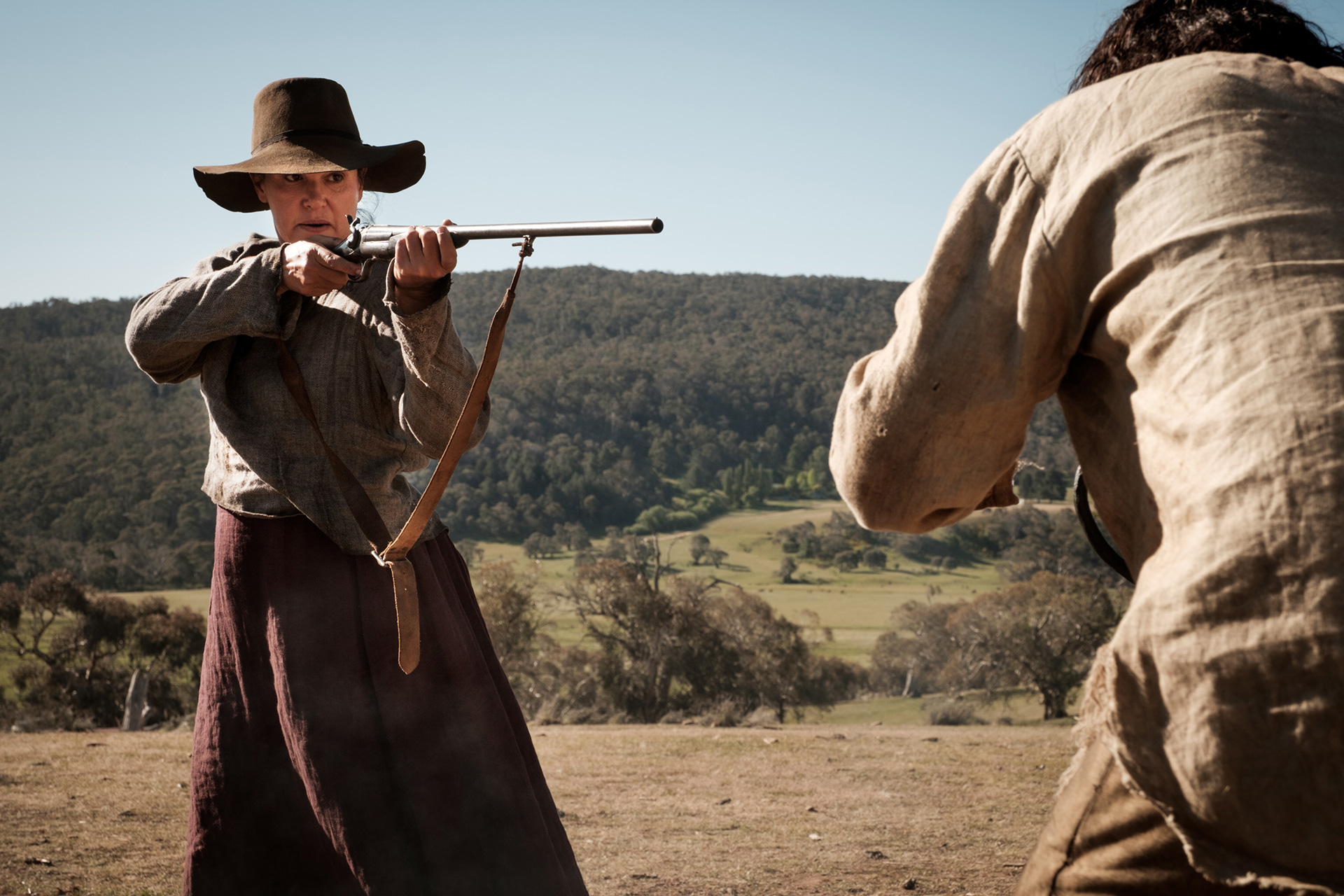 A favorite of Leah Purcell’s as a child, Henry Lawson’s short story “The Drover’s Wife” was always at the front of her mind when growing into adulthood as an artist. It only makes sense, then, that she would take that 1892 tale and reimagine it as an Australian western that would bring her own ancestral history as a fair-skinned Aboriginal woman to light. First she had to give the titular wife a name: Molly Johnson. Next it was fleshing out a dramatic narrative beyond that of a devoted mother staying up all night to protect her children from a hidden snake while reminiscing about all the other times for which she did the same (fire and flood) with her husband consistently away. A legend was born.

Purcell also wrote a play and novel, gradually expanding the scope and reach of the material from stage to screen. It’s a deliberate evolution, too: The Legend of Molly Johnson never feels like anything but a cinematic experience. We see the bush’s wide expanse and meet Molly (Purcell) as she senses an unwanted figure encroaching upon her land while her eldest (Malachi Dower-Roberts’ Danny) sits inside the house and her other three children play behind. Pregnant with a fifth and tasked to keep them safe while her husband Joe remains away on a six-month livestock drive, she sprints to grab her rifle and peer down its sight to capture a bull preparing its pounce. The shot jolts her (and us) into one of her darkest memories.

What it is (Molly raising that same gun to shoot a man) and when it happened is yet unknown. The mark left, however, is obvious. So when an unannounced wagon makes its way towards their property as she cooks some of her kill’s meat, it’s not shocking that she sends the kids inside and once more grips the rifle. The strangers are friendly this time: Sergeant Nate Klintoff (Sam Reid) and his wife Louisa (Jessica De Gouw). He’s to be sheriff of the nearby, soon-to-be town of Everton and thus a godsend—a kindly priest and his sister who help watch the children reside there too. Molly seizes the opportunity to have the Klintoffs transport her kids as she waits for Joe and readies to give birth.

It’s here the film splits into concurrent threads depicting Molly’s activities once another stranger arrives and Nate’s early days trying to earn respect in what had been a lawless land. That visitor (Rob Collins’ Yadaka) becomes their connective tissue—helper to Molly despite an iron collar marking him a criminal and prime suspect to Nate as the apparent murderer of the wife and children of Everton’s financial benefactor. Add the mystery of why Joe has yet to return, and the unchecked racism at the heart of a Black man being wanted for heinous crimes—regardless of him seeming kinder and more forthright than any of the white womanizing drunks readying to kill him—to Molly’s confused past; the prospect for a happy ending all but disappears.

So what will the horrors to come supply us? That’s the central question. The answer isn’t hard to find once we learn Louisa’s ambitions to publish a women-led journal, of which her first article is about domestic violence. Suddenly everything is colored by such abuse. Theories about who really murdered Mr. Edwards’ family. Accusations as far as how Joe might have disappeared. Epiphanies adding context to the nonchalant way in which young Danny speaks about the injuries inflicted upon him by his father. This entire place becomes a cesspool for bigotry and trauma—so much so that not even Nate is immune. As his wife angrily remarks, his quest to kill “savages” better not ultimately turn him into one too. The jury can’t help but perpetually remain out.

The plot’s progression exemplifies ways in which stories are shared and men “made.” A drawing of Yadaka that Nate brings around the town renders him guilty without the need of a trial; rumors of his lineage mark him a dead man. Tales told by Yadaka’s family about “Black Mary” (Sinsa Jo Mansell) bring joy and promise, the woman potentially having even helped Molly when her first child died during birth. Those same tales, when warped by the mouths of that priest’s sister, make her out to be a heathen and perhaps an excuse to steal Molly’s children away from her. Every detail becomes filtered through a faulty prism, labeling its cause and effect good or bad depending on whether its moral is honored or weaponized.

Both Molly and Nate fall prey to this duality. Their learned prejudices stop them from acknowledging blatant truths, twisting their humanity into the paranoid fear and rage that drives men in town. Not only will they each need to choose a side; they’ll need to step back and reconcile what it is they have the power to change through that choice. It leads to a heartfelt, bittersweet end saying everything it must say via the expressions on their faces since words would only fall on deaf ears. And no matter what happens, if those children survive to set the record straight and live with pride in who they are despite what others believe, their stories will stand to help make the world a better place.

Purcell presents it all like a dream, ancestors guiding these characters towards a future that will hopefully improve upon the present. That hope stays alive throughout all the nightmarish acts committed—it must. Molly and Yadaka are survivors. Add Louisa to the mix and this trio proves to be gentle souls, albeit with a fire that allows them to act in pursuit of justice and love. Purcell and Collins are unfortunately made to suffer for their trouble, their performances a moving tribute to the sacrifices so many have made for their people to live on with the promise of more. Their characters share their memories to educate, but also earn immortality. That’s what legends do, fictional or not. Their strength sparks a cultural revolution.

The Legend of Molly Johnson hits limited release and VOD on August 19.