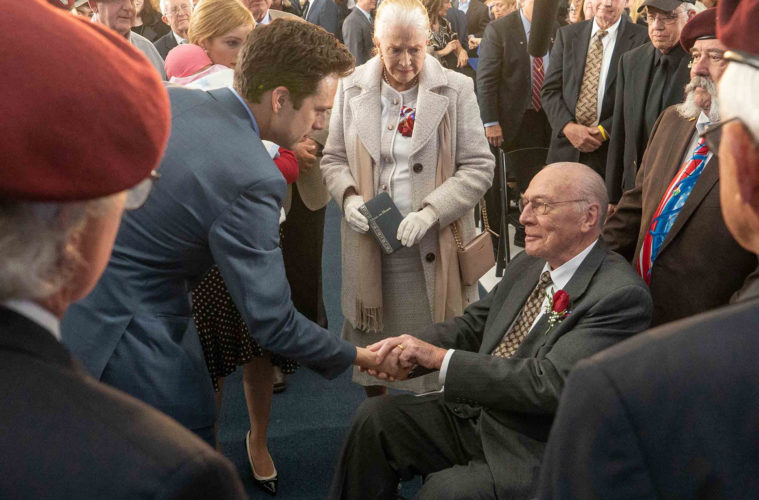 While Todd Robinson’s The Last Full Measure does center upon the cost of war, it’s neither a pro-war or anti-war film. He instead allows the idea of battle to exist as an imperative within Airman William H. Pitsenbarger, Jr.’s story. Not only did this young man enlist to go to Vietnam, his bravery led him to voluntarily exit his helicopter above the massacre of Operation Abilene in order to help a division of total strangers who just sent their only medic up for evacuation. Pits saved many men’s lives that day before waving the chopper off, taking up a gun, and doing what he could to save more. His heroic death deserved a posthumous Medal of Honor. What he received instead was the Air Force Cross.

The difference might not mean much to you, but this film goes a long way towards showing why it means a lot to military veterans and families. That’s where fictional Department of Defense lawyer Scott Huffman (Sebastian Stan) comes in. He doesn’t care about the differences between medals either. It’s not like Pits was left empty-handed. So why should he work to upgrade an otherwise valid distinction three decades later? It’s a question too many Americans ask because too many Americans take the sacrifices made during war for granted. Whether or not Vietnam was a just fight should have no bearing on the men who fought it. They endured its hardship, are haunted by its memories, and stand as oft-forgotten human shields forever protecting those who’ll never know.

It’s people like Huffman who have prolonged this specific mission. The men that Pits saved never stopped fighting to honor his name with the award he earned—one that to this day has only ever been given to eighteen Air Force members and only three enlisted airmen among them. What a crazy stat. That’s why this struggle means so much to those who were there like Tom Tulley (William Hurt), Billy Takoda (Samuel L. Jackson), Jimmy Burr (Peter Fonda), and Ed Mott (Ed Harris). It’s also why they see a suit like Huffman and assume nothing will change. To them he’s just a guy being forced to do a job he admittedly plans to devote little more than the bare minimum to before closing the file yet again.

That’s not what happens this time, though. Robinson doesn’t really show us why that is (we never hear about the previous lawyers or get a sense of Huffman’s potential for kinship or understanding beyond the fact that he’s a father and the bond between a dad and his son can supposedly thaw even the most ruthless of bureaucratic hearts), but we are shown the very real differences between veterans and civilians that should inspire reverence in even the most jaded of misanthropes. The simple fact that Tulley and company haven’t given up should prove as much, but the addition of Pits parents (Christopher Plummer’s Frank and Diane Ladd’s Alice) holding on to life to see their son honored guarantees it. We should all want to give them closure.

The same goes for the men who not only live with PTSD, but also the survivor’s guilt of being alive while Pits isn’t. This Medal of Honor has become a way to fill a hole within their souls. It’s a way to pay back the gift he gave them without ever asking for something in return. We see it in their current eyes (Hurt, Jackson, Harris, and Fonda, in one of his final roles, deliver heartbreaking performances) as well as those in the past courtesy of flashbacks depicting Pits’ (Jeremy Irvine) valor while they lay wounded with nowhere to go. Only they know what it was like to be on the ground in an ambush. Only they know the cost paid while others disrespect them back home.

Huffman must be exposed to this truth before progress can be made. He has to see the pain these men still suffer first-hand. He also must see his initial ambivalence projected back onto him thanks to a colleague (Bradley Whitford’s Stanton) to realize he doesn’t have to be part of the problem anymore. Does clarity give Huffman the right to start playing therapist as the score swells for amplified emotions? No. Despite Hurt giving his all in a scene where Stan’s Scott is asking his Tulley to confront personal demons, the dynamic feels forced. Just because Huffman confronted his own thanks to another vet who owes his life to Pits, Kepper (John Savage) earned that unique power. Huffman earns the courage to be a proxy, not a healer.

The Last Full Measure can hardly be perfect when some of its melodrama is proven disingenuous like that, but it remains both effective and affecting. There are some truly profound moments of authenticity that hit harder than I thought possible before sitting down to watch. It’s little things like the fear of failure flooding back to Harris when he remembers a broken promise. The calm grace in Plummer’s voice when a deeply hurting Jackson calls him without the ability to utter a single word. Or Fonda being so high strung that he looks and acts like a caged animal, an all-consuming desperation threatening to destroy his sanity. Huffman’s journey might be chock full of conveniences, but there’s absolutely nothing convenient about the mark war left upon his guides.

So don’t expect a jingoistic tale of blind patriotism. You don’t have to glorify war to glorify those who fight it. That’s an important bit of nuance too many refuse to acknowledge when it’s easier to defend one by defending the other. Robinson’s decision to draw a line and keep them separate is his film’s greatest strength because it provides an entrance that doesn’t demand we pick a side. There are no sides when it comes to appreciating soldiers like William Pitsenbarger—only awe. Rather than epitomize a great military man, he exemplifies what it is to be a great human being. That’s why his story can change the priorities of a man like Huffman and why those he barely knew can dedicate their lives to his honor.