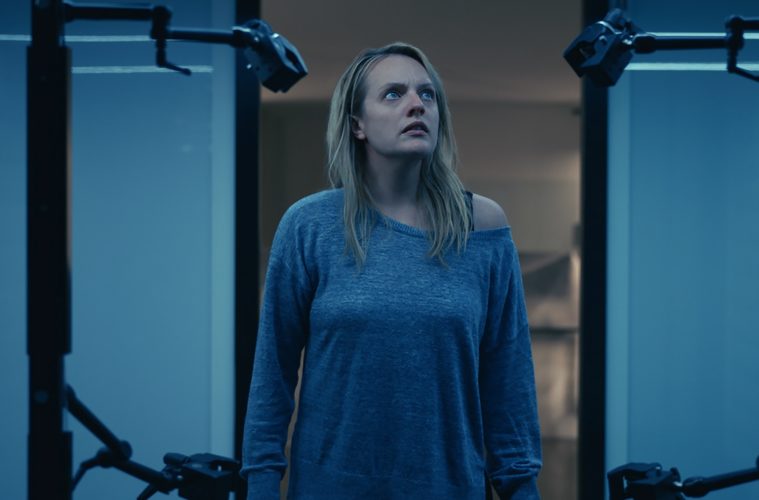 The innate horrors of the unseen are given fresh life in The Invisible Man, a reinvention of the H.G. Wells’ novel that was first brilliantly adapted by James Whale in 1933. This revamp from Blumhouse and Universal finds writer and director Leigh Whannell altering and evolving techniques he used to great effect in the B-movie mania of his last feature, Upgrade, while also taking a classic story in bold directions. Here, he channels his unique lexis toward a study of abuse, paranoia, and trauma, resulting in a grounded and paced horror film that nevertheless reaches maniacal heights.

From the first scene, The Invisible Man throws one right into the thick of it, staging a tension-filled sequence as a traumatized but determined Cecilia (Elizabeth Moss) tries to escape the clutches of her abusive and crazily possessive boyfriend Adrien (Oliver Jackson-Cohen). Once safe, Cecilia’s life quickly unravels as the news of Adrien’s apparent suicide brings nothing but a series of strange and unsettling events that isolate Cecilia and begin to tear at the seams of her reality.

Despite the inherent sci-fi/horror conceit of an invisible man, Whannell’s film is fixated on feeling, genuinely troubling itself with Cecilia’s mental health and the lasting, often all-encompassing impact of abuse. Despite this tempo, however, The Invisible Man never placates the audience. There’s a clever and constant barrage of subtle sensory cues–a shift in atmosphere when she steps outside, hair standing up on the back of her neck; a still room, disturbing with a sense of absence (or perhaps not). Whannell’s camera roves here, there, keeping one’s eyes scanning frames for the Where’s Waldo of movie monsters, all while serving as a lexical encapsulation of paranoia and lingering trauma. A restful moment is never granted to Cecilia in her heightened state.

The SnorriCam effect (where a rig is attached to the actor’s body) that Whannell so ingeniously used in his last film is deployed much more subtly here, but no less effectively. Where this technique was used in the techo-thriller world of Upgrade to demonstrate a shift in sensory experience–the body melding with a digital mind–in The Invisible Man, the director channels this shift in more sobering and empathetic directions to illustrate panic. This variation, taking kinetic and acute camera moves and finding new purpose for them, perfectly melds the world of The Invisible Man and the trauma therein. Likewise, the undeniable lunatic nesting in Whannell’s core is one that perfectly mirrors the monster that may or may not stalk each frame of Cecilia’s world.

Using a calculated combination of slow pans, pushes, and static frames, Whannell emphasizes the potential menace of even the most commonplace still-life. One of the great successes of The Invisible Man is the way it channels meaning into traditionally empty visual spaces, recontextualizing frames of doorways or the corners of rooms. Whannell takes commonplace images and then distorts and perverts them, resulting in an intensely engaging viewing experience and creating a visual representation of Cecilia’s constant struggle with trauma that lingers like a stench in the air. It’s downright astounding the way his dualities as an emerging director play with and mirror the two spectrums of The Invisible Man’s diegesis and themes.

Carrying the body fascination and physicality of Upgrade into more emotionally substantive territory, The Invisible Man also develops Whannell’s approach of blending SFX/VFX, visual language, and performance, allowing actors to truly sell heightened genre ideas. Elisabeth Moss is the film’s center of gravity as she deftly navigates the hire-wire act of sanity and lunacy, keeping viewers rooted in her psyche even as Whannell kicks it into overdrive. Transitioning from subtle tics to crazed determination, Moss carries Cecilia from the tight grips of hysteria into a genuine horror heroine.

Following a more grounded first half, delirious B-movie thrills come surging in, backed by an absolute ripper of a score and an emotional foundation that makes the blows hurt. The camera is always grounded, even during the most heightened horror moments, but it is also gymnastic, hard-hitting, and frankly delightful when it runs to the very end of its leash, threatening to break free from this careful blend of verisimilitude and sheer madness.

This is where the film’s most wicked and incongruous highs are reached, as we find ourselves delighting in the sheer ingenuity of the violence, even as we’re tethered to the sensory horrors of Cecilia’s perspective. It’s a delicate line for Whannell to walk, operating in a genre with certain demands and still remaining empathetic. Yet it’s a balance he’s clearly aware of, as he oscillates seamlessly between modes, and even subtly implicates viewers for their bloodlust. At times, we find ourselves not in Cecilia’s POV, but that of her deranged stalker, with the titular invisible man mirroring both our omniscience and perverse fascinations. Yes, we care, but what have we paid to see?

Wrestling with these ideas in an entertaining fashion, The Invisible Man is full of tension and surprise, a brooding midnight movie traumatizer packed with the constant threat of unhinged energy that roars with a crowd.