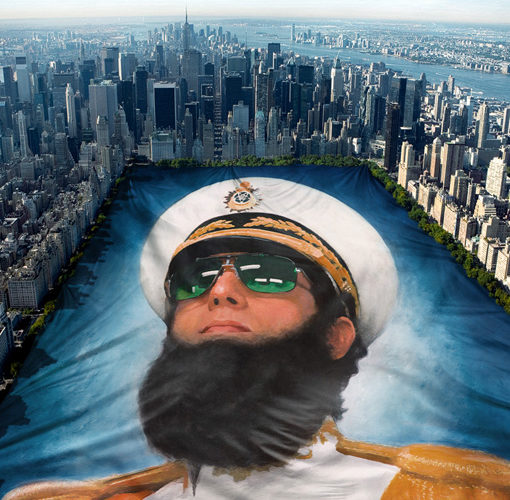 When it comes to The Dicator, it’s become increasingly apparent that Sacha Baron Cohen‘s real-life antics may end up being more humorous than the actual film. Nothing that we’ve seen quite matches up to his Ryan Seacrest Oscar incident and with a new clip released I’m curious if the non-mockumentary style will serve to detract from the overall effect. Coming from Yahoo, it features Anna Faris, who befriends Cohen’s character and much of the comedy looks to be forced.

There’s also a new correspondence from the dictator, which reveals some sort of gold-plated cars appearing at an event and anyone that buys one also agrees to have sex with him. It seems like marketing is trying too hard on that front to be as obtuse as possible. Directed by Borat and Bruno helmer Larry Charles, one can also see a new poster via EW for the film also starring Ben Kingsley, Megan Fox, John C. Reilly and J.B. Smoove. From: Office of Propaganda

His Excellency Admiral General Aladeen has graciously granted his express permission for Dartz Motorz, manufacturer of ultra-luxury armored vehicles and exclusive provider to the Wadiyan government motor pool, to offer limited edition commemorative vehicles honoring the Ruthless Protector of the Precious and Expendable People of Wadiya. Like civil rights in Wadiya, this offer will not be around for long.

Named for the undemocratically and forcibly elected Leader of Wadiya, the gold Aladeen Edition armored vehicles will be revealed to the people of the world at the Top Marques Monaco show under the high patronage of His Serene Highness Prince Albert II of Monaco. Top Marques Monaco, held at the Grimaldi Forum April 19 – 22, is revered as the world’s most exclusive supercar show where drivers experience firsthand the latest state-of-the-art machines on the prestigious Formula One racetrack, the Circuit de Monaco, mere weeks before the famous race takes place. A race that Aladeen has already won.

The Dartz Motorz PROMBRON (ex.RussoBaltique) vehicle comes from a long line of armored vehicles more than a hundred years in the making; it was originally built in 1912 for Russian Tzar Nikolai II. The PROMBROM was also NOT used in the accidental hit-and-run death of Wadiyan political opposition leader Maran Harouri, nor in the accidental repeated running over of the six witnesses to the hit-and-run.

Labeled the “World’s Most Expensive Armored Car,” the PROMBRON is the fastest and most maneuverable luxury armored all-road vehicle in the world. With supercar power and the technology of a spaceship, it boasts very unique protection capabilities from level B2 to B7+, providing occupants with resistance to RPGs and .50 caliber high velocity armor piercing rounds (or as Aladeen calls them, “love letters from his people.”)

Furthermore, all Dartz vehicles come equipped with patented 3” ionized glass, also RPG resistant. Each vehicle is handmade with great attention to sumptuous detail, exemplified in the exotic hand-stitched leathers and wood used in the interior, reclining massage seats, champagne bottle chillers and wine racks. And there’s room in back for up to six kidnapped actresses or faded supermodels.

Ten Aladeen Edition vehicles will be made available as part of this limited offer. MSRP ranges from $500,000 to $750,000 (USD). Actual price will vary depending on equipment and package options. (Price excludes title, taxes, registration, license fees, insurance, dealer prep and additional options.) By purchasing one of these vehicles you are also legally agreeing to have sex with Aladeen. The heroic story of a dictator who risked his life to ensure that democracy would never come to the country he so lovingly oppressed.