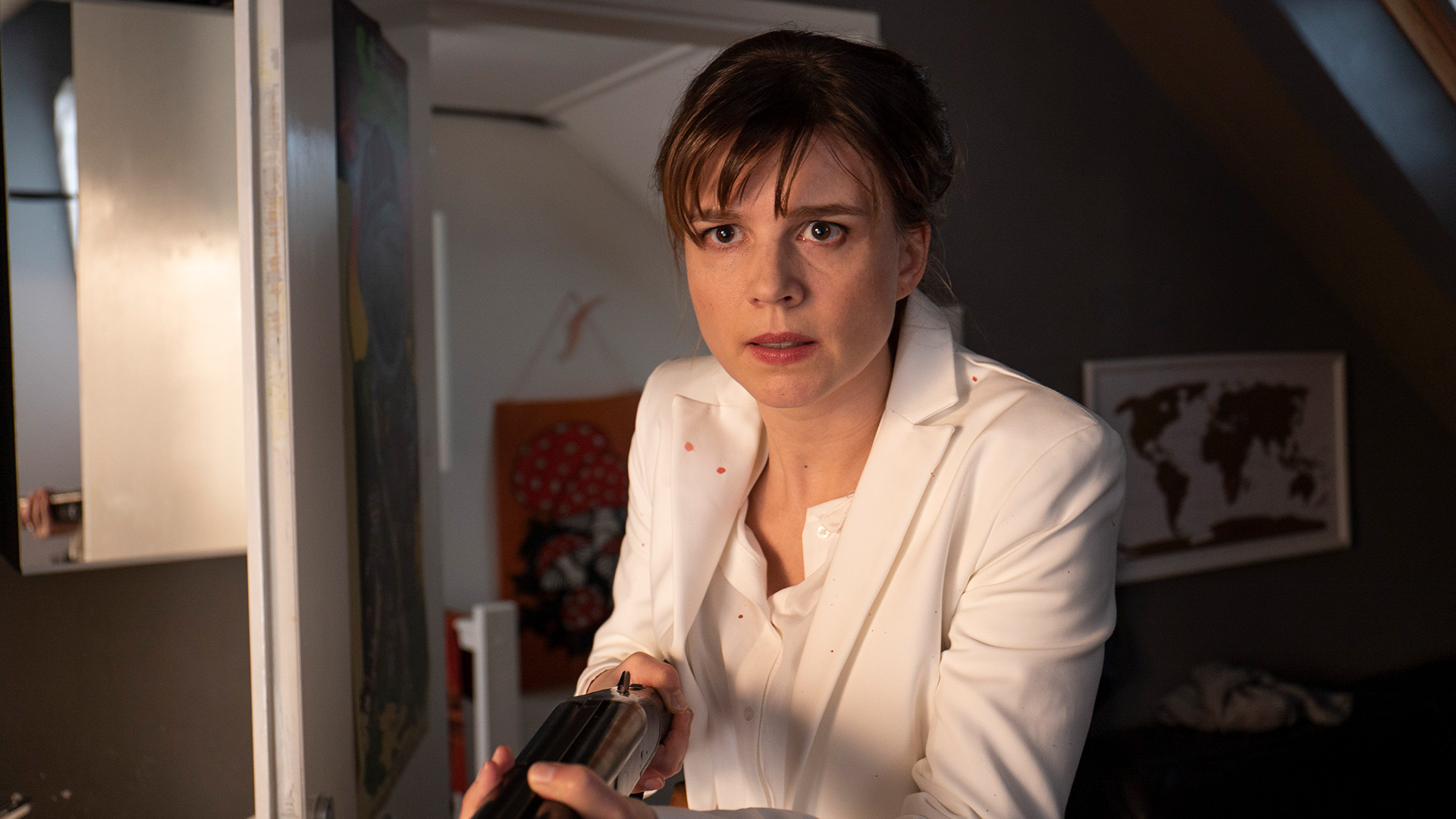 Never read the comments—a universal rule for all writers who publish, share, or create on the internet. No matter what you say or how you say it, there will always be a troll ready to disparage your work or you personally. They don’t need a reason beyond their ability to do so. They don’t need a salient point either. And it’s precisely because they possess neither that they ultimately live rent-free inside the minds of everyone they attack with artificial anonymity. One doesn’t even have to read their words to feel their pain because knowing they exist eats at you regardless. So don’t ignore them. Don’t pretend they aren’t there waiting. Because doing so gives them credence. Fearing such comments only fuels their authors to strike again.

This is precisely why director Ivo van Aart and screenwriter Daan Windhorst’s De kuthoer [The Columnist] is a success. Despite everyone telling editorialist Femke Boot (Katja Herbers) to simply log-off of social media, she refuses. She lets the trolls’ vitriol consume her so fully that there’s nothing else to do but confront them. By showing them that she won’t be defeated, Femke turns the tables to reclaim power and control the dynamic. She forces them to reveal their true colors whether it’s doubling-down on their malicious assaults or putting up their hands in surrender. One could argue that’s the only way to stop the bleeding. Expose them as bile-filled nobodies or fearful children ignorant to the consequences of their actions. Find sweet relief in their mediocrity.

Yes, we’re watching Femke confront these men to murder them in cold-blooded revenge, but such violence is actually a metaphoric act for finding peace of mind. Their screaming is all she can hear day and night—silent wails emanating from every device with internet connection she owns until giving them a voice via reading. The sound is deafening enough to block her mind from writing the new book her publisher has been hounding her for while also telling her that the noise is exactly what they need to sell more copies. So she learns to embrace it as a tool. Doomscroll the never-ending cesspool of slander, hostility, and death threats; find a commenter dumb enough to be located via Google search; and put him out of commission. Permanently.

The fact she isn’t careful while doing this isn’t therefore a flaw in the film, but the telltale sign that what we’re seeing is intentionally heightened for the benefit of its commentary rather than its deeds. If Femke was wearing gloves and covering her tracks, The Columnist would be a very different piece. It would be about a serial killer giving into her darkness rather than a woman restoring confidence and autonomy. Should the police have found her after she walked into someone’s apartment, left fingerprints on the murder weapon, and forgot an article of clothing in the chaos? Yes. Of course. That they don’t is thus a conscious decision on the filmmakers’ behalf. They’re allowing her to exorcise her demons as freely as they’ve attacked her.

And the result is entertaining satire with a dark edge of relatable excitement. Much like the glorious kills in Bobcat Goldthwait’s underrated God Bless America, we’re getting something out of the carnage right alongside its producer. We bask in the satisfaction upon Femke’s face as she bounces her victim’s hate back at them. We relish the electric energy that’s released when she kills them with an effortless ease sparking psychological rejuvenation. She becomes our fictitious outlet for the aggression we’re unable to unleash ourselves despite how far society’s capacity for empathy has dissolved these past couple decades. Windhorst and van Aart are providing twentieth century creators a much-needed catharsis while also shining a light on the gatekeeping hypocrisy that can arise whenever free speech is placed on trial.

This is where nuance enters despite it being a product of broad strokes that are anything but. One example has Femke’s daughter Anna (Claire Porro) embroiled in a fight against censorship at school. The teen is being willfully belligerent and antagonistic towards her headmaster—much like the trolls towards her mother—and yet the impact is wholly different because the former’s actions have purpose (struggling to overcome an oppressive force) while the latter’s don’t. Another is Femke’s new boyfriend (Bram van der Kelen’s Steven Death) as an overt compare/contrast point being a successful author of horror fiction. Not only is the backlash tamer because he’s a man (misogyny renders comments infinitely more heinous), but it’s also not personal since his writing isn’t an extension of himself like hers.

So it shouldn’t be surprising to watch her frustration rise with each instance of being told “they’re just words.” They aren’t. Not in the context in which they’re being thrown at her. That the ratio is practically five-to-one where it concerns those ignoring her anger and those genuinely sympathetic only exacerbates the need to act on her own behalf. The second society decides it’s okay with what’s happening—and, in some cases, like with Femke’s publisher, fuels it—the room for civility and compromise disappears completely. We’re witnessing an escalation of protest wherein meaningful words are impotent to change empty ones. Action picks up the charge instead. By viewing the kills as figurative, Femke’s strength rises above her sadism. She’s fighting fire with fire in a broken world.

The Columnist hits virtual cinemas, VOD & Digital HD on May 7.