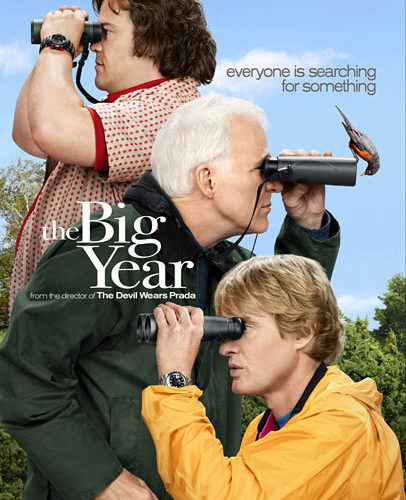 If you like your studio comedies big and broad, David Frankel is your man. The latest film from the Marley & Me director looks to continue his streak as Steve Martin, Jack Black and Owen Wilson team up to go on a globetrotting adventure. Based on Mark Obmascik‘s 1998 novel The Big Year: A Tale of Man, Nature and Fowl Obsession and adapted by Howard Franklin there is only a brief mention of what is said to be “a competitive bird-watching competition tournament.”

It is apparent in the poster and half the trailer shots our men have bird-gazing binoculars around their neck, but is peculiar how 20th Century Fox didn’t include any mention of the actual plot here. I’m sorry Kes and Hitchcock, but I guess birds aren’t as big of a draw as I imagined. Check out the trailer below via Apple for the film also starring Brian Dennehy, Rashida Jones, Rosamund Pike and Dianne Wiest.

Steve Martin, Jack Black and Owen Wilson are at a crossroads — one is experiencing a mid-life crisis, another a late-life crisis, and the third, a far from ordinary no-life crisis. From David Frankel, the director of The Devil Wears Prada and Marley & Me, comes a sophisticated comedy about three friendly rivals who, tired of being ruled by obligations and responsibilities, dedicate a year of their lives to following their dreams. Their big year takes them on a cross-country journey of wild and life-changing adventures.