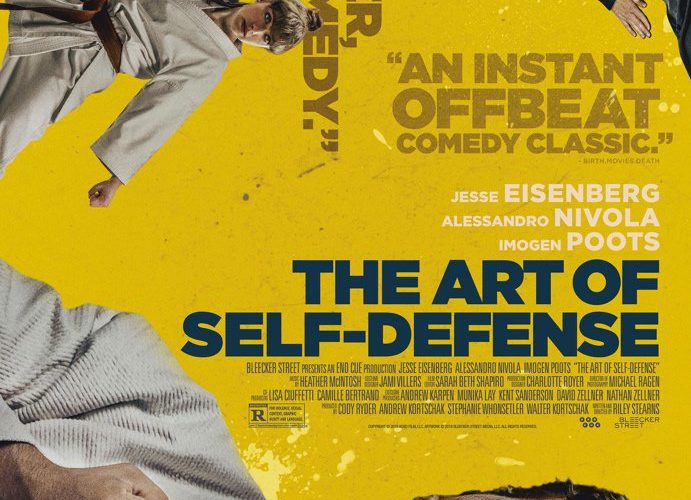 If Fight Club taught us one thing and one thing only it is to never underestimate the power of a bored single man with nothing to lose. And that is, in some ways, also the central thesis of Riley Stearns’ delightfully twisted The Art of Self-Defense, a pitch-black comedy starring Jesse Eisenberg as sad sack Casey, a lonely auditor who, in the film’s opening scene, is mocked at a distance in French by a couple. He, unfortunately, has become proficient in French, working his way through cassette tapes on his commute to work. He’s an easy and perhaps asexual target, turning to a meticulously photocopied men’s lifestyle magazine for advice and masterbatorial materials.

One night while walking to feed his beloved dog his life is turned upside down in a violent assault in which he’s left for dead for seemingly no reason. The assailants don’t seem to have much interest in his wallet, they may just simply be getting their rocks off. Awaken from a coma he sets out first to buy a firearm before being blocked by the background check and waiting period before giving karate a try and eventually finding himself.

If I’ve held back a few details, it’s by design. The Art of Self-Defense proves to be a twisted comedy with hidden depths that gravitates at times between tenderness and restrained silliness as Casey becomes a regular and well-liked member around the school. Mentored by the facility’s Sensei (Alessandro Nivola) he’s given polite encouragement by all including Anna (Imogen Poots), a skilled warrior who teaches the kids class. Amongst her lessons for the little one is “tap out or take a nap,” teaching them the fine art of choking someone out–perhaps this should all be a red flag for the normally non-impulsive Casey.

Things become much stranger as Casey ascends to the rank of Yellow Belt before getting a rare invite to a night class. Saying any more about the plot of the film will only spoil things as Stearns effectively ratchets up the dark humor and physical thrills. Casey’s journey into this darker world begins hilariously with advice from Sensei who advises him to embrace his masculine side; learn German (rather than France) and not take bull from anyone including his mild-mannered boss or his dog. This seems to cure Casey of his stated intimidation of men turning him into a dark creature with a note of Nicolas Ray’s Bigger Than Life.

With a muted palette shot by cinematographer Michael Ragen (re-teaming after Faults), Stearns embraces droll humor and violence creating a subversive universe that works within its own established logic as Eisenberg’s Casey puts his audit skills and awkwardness to good use. When the film works it veers into the domain of the uncomfortably hilarious as the maladjusted becomes a malcontent without a choice. The Art of Self-Defense relies heavily on the violence it reaps, occasionally taking a few predictable turns along the way. Like Casey, it often feels the need to spell out exactly what it is going to do, and then do it professionally.

The Art of Self-Defense premiered at SXSW and opens July 12.