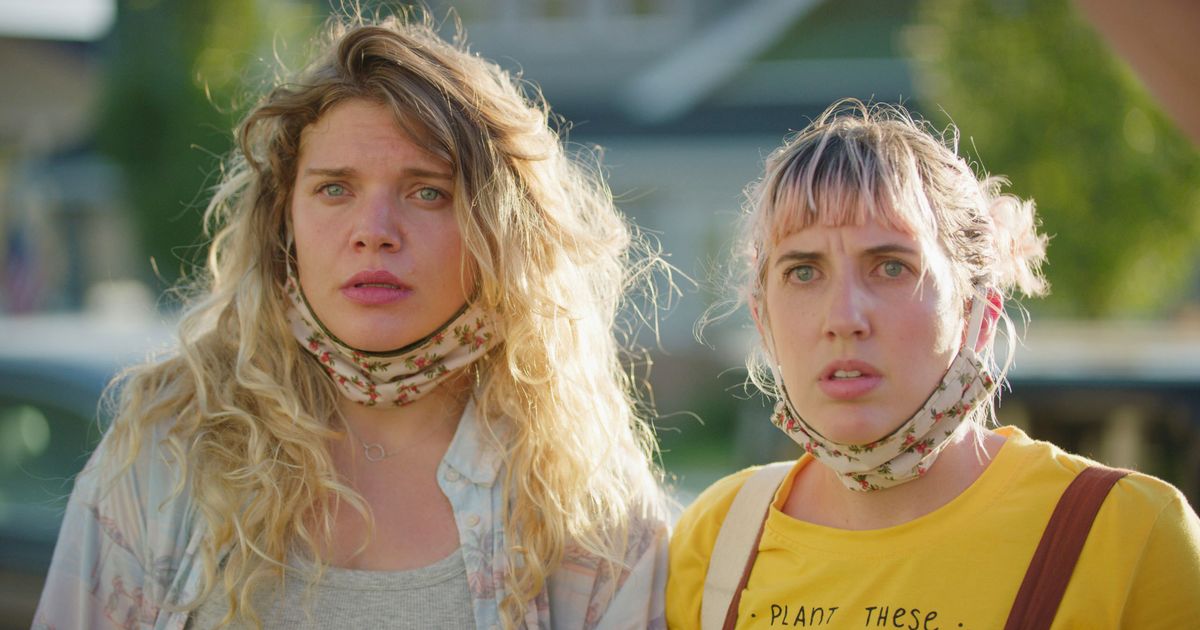 Several years ago, South Park asked the question: at what point is it acceptable to make a joke about a tragedy? The answer within that universe was 20 years. The inquiry comes to mind again as one’s receptiveness to Mallory Everton and Stephen Meek’s road trip comedy Recovery depends largely on the ability to laugh about COVID-19. Set in late March, it’s a time period when some awkwardly wiped down their groceries with bleach but well before the country seemed as if it was about to explode with the summer uprising. With a script that takes many comedic shots with varying results, Jamie and Blake (Everton and fellow co-writer Whitney Call, respectively) are thirty-something sisters living in Albuquerque getting ready for the best year of their lives. Jamie, a teacher, has just turned 30 and has a life plan for #adulting while Blake, without a set career, seems to exist as an emotional support of Jamie.

Two weeks after the party, Jamie and Blake enter lockdown together when an urgent letter arrives letting them know their grandmother in Washington is in a nursing home with COVID positive cases. Freaking out, they insist aunt Erin (Julia Jolley)––who has booked a cheap cruise on Groupon––to spring her, before realizing they have to take matters into their own hands. Herein lies the question: can this idea possibly be funny? Recovery, amongst many jokes it pitches, includes quips about PPE shortages, nursing homes, and cruises. In these specific moments, its comedy comes off more cringe-inducing than sharp, incisive, or humorous.

This is not to say the COVID era should never be the source of any laughs. It’s certainly a fine line that late-night comics working from home had to walk to offer some context in a dark time. Behavior can be funny––privileged Karens refusing to wear masks at Trader Joe’s, for instance, although institutions in crisis mode are tougher. Recovery is at least aware of the privilege Jamie and Blake have––the luxury of staying home and ordering items on Amazon––while Erin and her husband have their own luxury, that of utter ignorance.

Recovery is most effective and charming once it gets out on the road, as Jamie and Blake spent time on a journey navigating everything the pandemic has made more complicated like teaching, dating, and dealing with family members whom you believe are reckless. Playing out largely in the car as well as on computer screens, the broad comedy largely revolves around sending awkward emojis and a fear of catching COVID from gas pumps.

Made during and arriving hopefully towards the end of COVID pandemic in the U.S., the film is at times a beacon of high-energy comedy, something we’ve had too little of lately. Mileage in the jokes to laugh ratio may vary, however, as it takes some time to eventually land a few big laughs amongst its many road movie tropes (considering how many they hit, getting arrested is curiously absent).

Despite its imperfections, the film announces the arrival of two talents in Everton and Call, who have impeccable comic timing as they’ve turned a very bad year into a calling card. Even if the film itself may be seen as either the first COVID comedy or a cheap shot that––like Vanessa Hudgens’ infamous livestream last year––minimized its effects, Jamie and Blake’s hearts at least are in the right place.