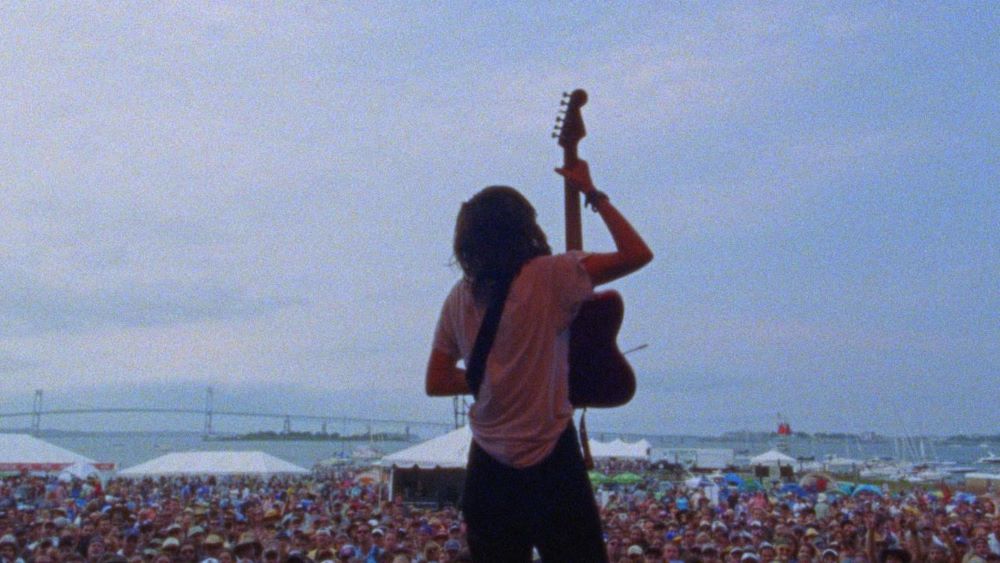 A current of loneliness runs through Danny Cohen’s beautifully haunting Anonymous Club, a rich documentary filmed in 16mm chronicling little more than a year in the life of singer-songwriter Courtney Barnett. Those familiar with Barnett’s music know it ranges from the empowering, like her international hit “Pedestrian At Best” (“Put me on a pedestal and I’ll only disappoint you”), to her latest single “If I Don’t Hear From You Tonight,” which represents the new direction Barnett is exploring as she attempts to slow down in her 30s.

Rising to stardom from 2012-2015, Barnett, like Billie Eilish, recorded her first album in her bedroom and released it online. Cohen’s cameras arrive in 2018 just as Barnett is winding down a whirlwind tour of festivals, arena shows, and international TV appearances supporting her album Tell Me How You Really Feel. Through it she candidly wonders what’s next and agrees to keep a dictaphone audio diary for Cohen as she grapples with both imposter syndrome and turning 30.

Told in four chapters (You Must Be Having So Much Fun, Idling Inexplicably, Solitude, and I Just Can’t Take Anymore) the film is both restrained and intimate, allowing Barnett to express her innermost thoughts through the dictaphone recordings and tasking Cohen (also the film’s DP) and editor Ben Hall with the finding the appropriate images to tell the story. The result isn’t quite a visual album so much as an experience that reflects and evokes the range of emotions in Barnett’s work. Through the messages, she reflects on her “intention” encouraging her fans at one point to take their “broken heart and turn it into art.”

Bouncing around the world from Oslo to Niagara Falls on a seemingly endless tour, she wears never evolving beyond the emo kid she was in high school as a kind of badge of honor, allowing her to tap into and draw upon the loneliness she must have felt while recording her first album in her bedroom.

The operation is larger and yet, by design, Barnett remains somewhat isolated and lonely. While she has creative partners, a potential romantic interest is noted only briefly in a passage, and it’s not exactly clear where “home” is. While the film is deeply intimate, it never quite becomes a personal exploration, her voice largely the only one speaking—apart from some archival materials and TV appearances when she’s forced to turn on a different side of herself.

Anonymous Club’s power is in its meditative nature, reflecting on the intersection of celebrity and creativity. As a viewing experience, some may find it draining; it’s certainly not a conventional concert documentary or a bit of fan service, but rather a new direction for Barnett, who is interested now in performing in smaller clubs and theaters than in amphitheaters and big music festivals. The film feels like a Kodachrome, stripped of all vanity, a generous act of self-expression that will resonate deeply with both new and old fans––especially those who listen to music to feel both heard and addressed.