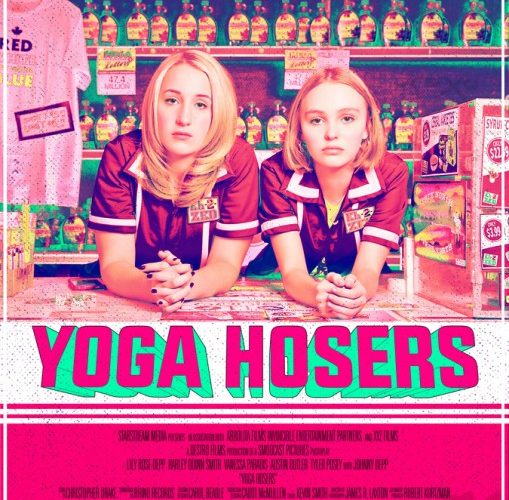 They may be “red and white and never blue” and they may “not even supposed to be here today,” but the clerks of Eh-2-Zed are certainly having an abnormal adolescence. Yoga Hosers marks the second film in Kevin Smith’s True North series, an American parody of Canada that may repay the favor for American Venus, Bruce Sweeney’s rare Canadian send-up of American values. This is certainly reading too much into the film, even if Smith takes the joke a little too far. There’s only so many times you can parody the pronunciation of the letter “o” as “eh.”

By all measures our heroines, the Colleens (Harley Quinn Smith and Lily-Rose Depp), are regular North American teens. Constantly on their phones, they dream of going to “grade 12” parties with cute boys even if they plan on stealing their souls. The girls practice yoga in a strip mall with Yogi Bayer (Justin Long), who finds himself embroiled in a lawsuit with Warner Brothers. Having their phones taken away by their PE teacher turns into a blessing when they learn of a particularly dark slice of Canadian history when Adrian Arcand (Haley Joel Osment) styled himself as a Canadian Führer. Strange foot-tall Bratzi – a Canadian Nazi made of Bratwurst — start to appear and ultimately make their way to the Eh-2-Zed. And at about that point things go south for Yoga Hosers,  the film Kevin Smith once called the kind of movie that the teen girl would have loved.

Spirited and fun during the film’s first 20 minutes, Smith introduces us to this alternative universe which includes Tony Hale as Bob Collette, father of Colleen C and owner of the Eh-2-Zed. While the Bratzi attack, he’s contently shipped off to Niagara Falls by his new wife Tabitha (Natasha Lyonne). This allows the girls a chance to throw a party — no, they don’t play roof-top hockey but Clerks fans will notice a few subtle references along the way. They invite over grade 12 boys, Gordon (Tyler Posey) and Hunter (Austin Butler), but the encounter ultimately leads to the girls getting charged with murder by the Mounties, until Guy Lapointe (Johnny Depp) saves the day.

Yoga Hosers is a film with good intentions. Smith, embracing his social media fans, seems to have a defined handle on teen girl life — after all, he’s raising one. The second film he’s made for his daughter (after his touching and wonderfully underrated Jersey Girl), here the B-movie gags just fall flat. The film’s best moments are front-loaded with wonderfully witty touches, including the band the two Colleens have in the back of the Eh with Adam Brody playing their 35-year old drummer. Several sharp lines and observations work, recalling the Jay & Silent Bob era of his career.

Like Tusk, Yoga Hosers feels as if it was outrageously conceived on SModcast. The absurdity of its plot description is fascinating on its own; where it falters is when these ideas come to life, including the reappearance of Adrien Arcand, a JV Canadian Hitler. It’s an interesting premise not found in a PG-13 tween horror film that could have been brilliant, until he resurfaces.

As an artist, Smith has grown to experiment with psychological horror. Red State was largely devoid of humor, but proved to be effective while Tusk also explored new territory, blending body horror with potty humor and drama. The execution here is sadly is far from anything interesting and despite the best of intentions, the playful B-movie horror elements fall flat more often then not. The culprit that steals the Colleens’ thunder unfortunately is Depp as Guy Lapointe, regional man of mystery. Playing the recurring Montreal-based detective, Depp unfortunately phones it in, giving a performance that recalled one last year’s worst pictures, Mortdecai. Yoga Hosers isn’t a bad time at the movies, but it’s painful when the gags fall flat.

Yoga Hosers premiered at the 2016 Sundance Film Festival and opens on September 2.