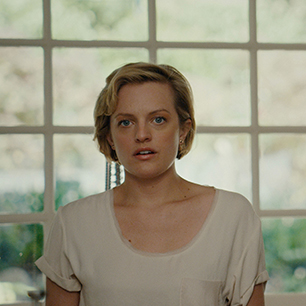 [Sundance Review] The One I Love

The driving force behind the very clever two-handed chamber piece The One I Love is communication. How we talk to those we love and those that love us. Mark Duplass and Elisabeth Moss play Ethan and Sophie, a married couple at a crossroads. When we meet them, they’re engaging in some silly-looking couples therapy with a very aloof Ted Danson. At the end of one of their sessions, the good doctor recommends that the couple take a retreat to a nearby cottage for the weekend and “reset the reset button.”

Ethan is still living down the guilt and mistrust that’s come from some recent infidelity on his part. Though this shadow hangs over their teetering relationship, once they get to the cottage things begin to get better. They’re laughing again, they’re talking again. Maybe it’ll work after all.

It’s here that the film shifts, going in a very surprising and fascinating direction that will surely elicit much conversation after the film’s run its course. Written by Justin Lader and directed by first-timer Charlie McDowell, this small film is a testament to the beauty of original ideas. There are no explosions here, no graphic effects or epic camera set-ups. Duplass and Moss do wonderful work throughout, selling us succinctly on this couple-in-crisis. Lader and McDowell are concerned with digging into the way we talk to each other and the tragi-comedy that comes from the very flawed, very human decisions we make.

Sundance ’14 has been something of a coming-out party for Moss, a young actress that continues to expand her range (lest we forget Top of the Lake) as her tenure as Peggy in “Mad Men” comes to a close. Between this film and the well-received Listen Up, Philip, Moss illustrates her capacity to create hard-edged characters with a vulnerable lining, an alchemy that produces intriguing results.

Independent film was built on the kind of small gem of original thinking that engineers the plot of The One I Love. As the initial question of communication gives way to a deeper questioning of how much we really know each other, McDowell’s picture goes to dark, introspective places without sacrificing the relatively light tone that works throughout.

That the third act purposely keeps some curiosities open-ended as a means to avoid potential plot holes is but a small complaint. Let’s celebrate the originality on display here, and the good work it has produced.

The One I Love premiered at Sundance Film Festival 2014 and will be released later this year by Radius-TWC. One can see our full coverage of the festival below.