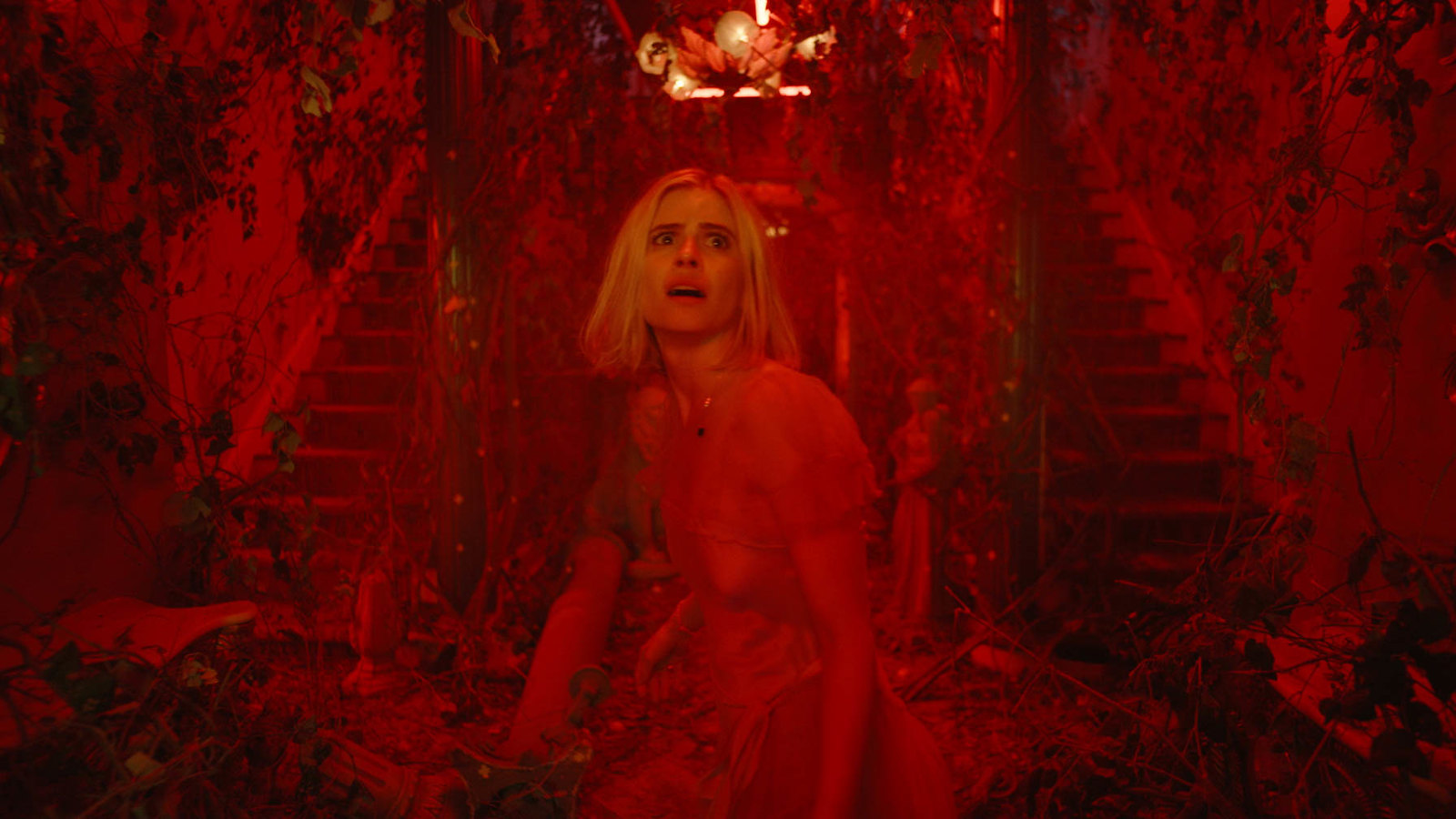 The Blazing World is trying—really, really trying. It knows a whole bunch of classics and clearly took more than a few notes from them. The starting point is straight out of Ordinary People. The production design is straight from Robert Wiene and Victor Sjöström. The score borders on plagiarizing that of The Shining a few times, and the main character is clearly named after Margaret Cavendish as if naming the film after her 1666 work wasn’t enough. Come to think of it, saying that Carlson Young’s feature debut is really trying is something of an understatement.

But while most bad movies are easy to dismiss, The Blazing World is a bit different. It’s easy to feel bad for how bad it is. Everyone involved here clearly wanted to make something great, to pour themselves onto the screen. Here, Young adapts her 2018 short film of the same name to 99 minutes, trying to bring the viewer into a subconscious wonderland fueled by trauma and loss. When the story at hand is so vacant, however, the surrealism doesn’t feel subversive or even too inventive. It just feels like a put-on, one that doesn’t understand its heroine’s mental state.

Young, who also wrote the script with Pierce Brown, plays Margaret, a 20-something on the verge of taking her own life. She was six years old when her twin sister, Elizabeth (Lillie Fink), accidentally drowned while her mother (Vinessa Shaw) and abusive father (Dermot Mulroney) were fighting. A portal appeared as it happened, and a strange man called Lained (Udo Kier) whisked Elizabeth away. Now Margaret lives elsewhere. She studies alternate dimensions as she tries to numb the pain. It’s when her parents decide to move that she returns home, only to get sucked into what might be that same parallel world.

The first act of The Blazing World is where the movie operates in the vicinity of success. The soundtrack, almost wall-to-wall orchestral music, is inherently beautiful. The acting is just exaggerated enough to be uncanny. However, it works because it seems intentional. This is a dark fairytale, right? Unfortunately, it’s from there the film takes an alarming decline in quality. Moments of dialogue are downright poor regardless of the dream logic, and any scene with more than two people can’t help but feel forced. There’s just no human connection here.

When Margaret actually goes into this alternate reality, though, is where it becomes entirely out of its element. It doesn’t stick to being a straight-forward head trip. Part of this is because a MacGuffin enters the picture in the form of a key Margaret needs to find, but this layer just feels like padding. Another reason is that the backstory fueling all of this isn’t even that cohesive. Elizabeth drowned while the girls’ parents were fighting, but are two events intrinsically connected? Not really. The decision to make their father a physically abusive alcoholic just feels like a way to wring out some extra drama.

Worse yet, these hardships seem unconnected for virtually the entire film. The Blazing World doesn’t understand suicidal behavior, and it doesn’t understand how traumas tear apart families. Instead, it just amps up the acting until Kier, Shaw, and Mulroney fall deep into camp territory, and the movie doesn’t even seem to know it. It’s completely and utterly serious. It drags itself to what’s not even a long runtime, and then it ends before it really gets going.

Sure, the giallo lighting from DP Shane F. Kelly is cool, and Rodney Becker’s production design is decent. None of that has any impact when each and every decision is straight from something else. It frankly would have also benefitted from a higher budget. (The visual effects aren’t good, and there are a lot of them.) It’s obvious that Young wanted to make something unique. Hopefully she strikes a chord in the future, but The Blazing World is just patchwork.