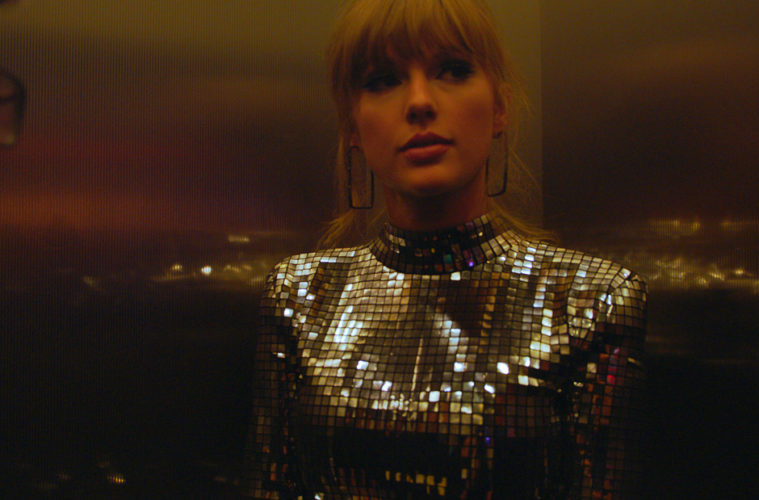 “It’s all just fucking impossible.” So says Taylor Swift, in reference to being a young female in show business. Being too bold draws this criticism, too safe draws that criticism. It’s one of a few observations that make this documentary more compelling than its straightforward structure would suggest. Miss Americana, directed by Lana Wilson, is framed like a confessional from the pop star who has been famous for more than half of her young life. Only recently thirty years old, Swift is front-and-center for the majority of the film, speaking openly about her stratospheric success and the hardships that followed.

There is something brave about making a documentary dissecting how hard it is to achieve all of your dreams, considering the vast majority of your audience are people who will never attain their own. Wilson captures Swift in moments of genuine (?) vulnerability. Consider a scene where she gets a call informing her there will be no major Grammy nominations for her album Reputation. The young artist takes it in stride, fighting back tears as she declares: “I need to make a better record.”

At first glance, one of the ten most famous people in the world lamenting a lack of Grammy nominations feels petty. Silly even. But then, that’s her life, isn’t it? Wilson does an admirable job conveying the intense differences between the problems Swift deals with and those of any normal human being. In one scene, we watch her exit a building into a limo, a litany of flashes and screams by the held-back mob of fans awaiting her exit. “That’s my front yard,” she tells the camera as she settles in the car. Who among us will ever know what that is like?

The Kanye West incident at the 2009 MTV Video Music Awards is re-litigated here as well, positioned as a turning point in Swift’s life. One might roll their eyes at first, but when they replay the interruption, the lingering psychological effects make a bit more sense. It was quite a horrible event for a vulnerable teenager. In truth, the film’s most compelling scenes are not on the stage, but in the studio. Watching Swift and her producers take scribble off her cell phone and turn it into hit music is impressive. Oh, how the industry has changed. A backbeat from a computer, a beautiful voice into a microphone and not much else. And yet, the excitement on screen when they crack a lyric feels timeless. This leads to a smash cut to a sold-out arena and the crowd reciting every word, showing how the most intimate moments of the personal creative process can lead to a universal embrace.

Things turn political about halfway through with Swift explaining how she was pressured by those around her to stay quiet for fear of cutting her audience in half. References to the Dixie Chicks abound, as they should. This grappling leads to her decision to endorse Democrat Phil Bredesen in the 2018 Tennessee Senate election. Her battles with her own management team to speak out in opposition to republican Marsha Blackburn’s policies against LGBTQ rights and her vote against reauthorizing the Violence Against Women Act feel tense and earnest. We see a deeply distressed Swift, silenced for years, reach a mental breaking point with no other option but to finally share her views.

And while most of this authenticity reads as manufactured and a bit focus-grouped, it’s hard not to like this pop star. The phrase “she means well” can band-aid any manner of sins, but here it feels like a true descriptor. Taylor Swift is choosing to speak her mind, and that’s probably a good thing. If it engages a few more young people to become politically active, then we can consider it a success.