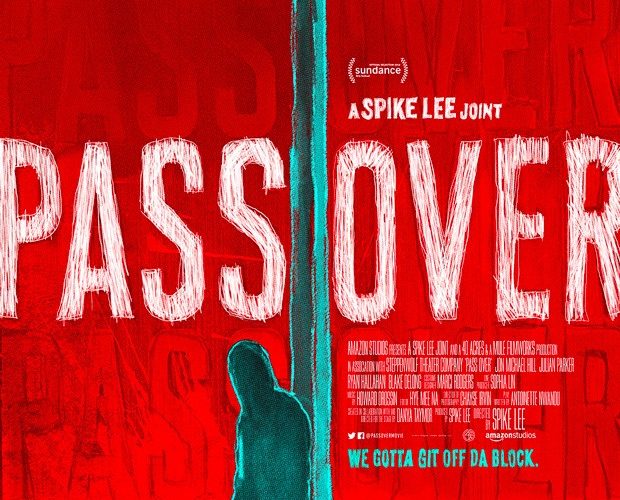 Once again, Spike Lee has found an innovative theatrical production and brought it to blistering cinematic life. Antoinette Nwandu’s Pass Over, produced in 2017 by Chicago’s Steppenwolf Theatre, combines Waiting for Godot, Biblical lore, and contemporary American race issues into a story that’s at turns funny, suspenseful, and bizarre. Lead characters Moses (Jon Michael Hill) and Kitch (Julian Parker) are waiting not for someone to come but for the time they’ll be able to leave the corner of Dr. Martin Luther King Jr. Drive and 64th Street and make it to “the promised land.” In the meantime, they shoot the shit, duck periodic gunfire, and have a strange encounter with a suspiciously polite, seersucker-suited white interloper (Ryan Hallahan).

The strong religiosity in African American communities has historically infused their activist rhetoric with Biblical allusion, especially to the Book of Exodus and its story of the Jews escaping slavery. Yet more than a century and a half after the end of black slavery in America, where is their promised land? Moses and Kitch are still faced with aimlessness, police violence, and lack of opportunity. Nwandu’s script turns this endless stall of progress into an existential allegory with a haunting overcast of pessimism.

Stage director Danya Taymor terrifically positions the actors around the simple set, and Lee works in concert with her show to set up some striking faming. When Moses and Kitch disagree over whether to accept a Mephistophelian offer of a picnic from the stranger (whose name is Master), the camera sits at a low angle behind the white man, making him appear larger than life and dividing the shot in two, with the leads on either side. Lee also refuses to keep the movie within the confines of the show itself, including a prologue and epilogue following a church group traveling to / leaving the theatre. There’s even a cut from the actual signpost at the corner of King Drive and 64th Street to the stage facsimile. The film will not let the viewer intellectually box its themes within this specific space – the issues at hand are far too urgent.

Pass Over premiered at the 2018 Sundance Film Festival and will be released in April.