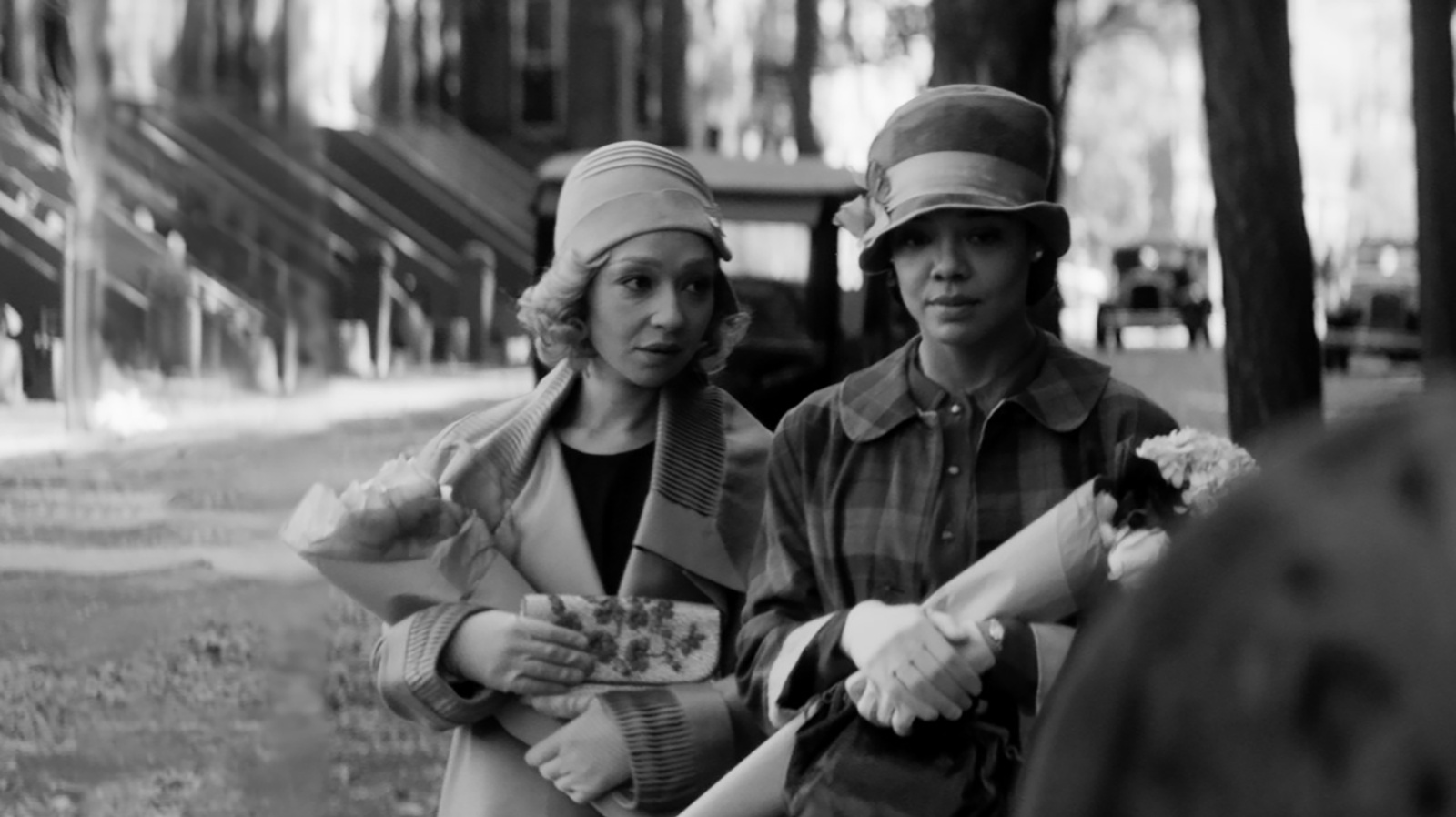 Rebecca Hall’s Passing has been fifteen years in the making, and that dedication shows in every meticulously crafted frame. Adapted from Nella Larsen’s 1929 novel, the tense, black and white psychological drama is a study in intentional filmmaking. Every detail is an obsession with symbolism and performativity, from the by-turns absent and invasive score courtesy of Devonté Hynes to the elaborate period wardrobe from Marci Rodgers, to the affect with which stars Tessa Thompson and Ruth Negga speak. This obsessiveness folds in on itself, creating a layered profile of reunited childhood friends Irene Redfield (Thompson) and Clare Bellew (Negga) whose muffled desire for one another exposes devastating cracks in each of their lives. By turns stifling and lucid with seduction, Hall’s debut is impressive, even when its atmosphere sometimes overtakes its pace.

The film’s premise hinges on Irene’s failing attempts to keep the daring and promisingly dangerous Clare out of her life after running into her on a particularly steamy New York afternoon. A visit to Clare’s hotel suite quickly sets the scene for a classic erotic trope, with Irene uncomfortably helping Clare disrobe as the latter rattles off her whereabouts in the decade since they’ve seen each other. When Clare’s virulently racist husband John (a slimy Alexander Skarsgård) arrives early, Irene’s shock over Clare’s failure to disclose her biracial Black identity morphs into horror and fear when John assumes that Irene is also a white woman, tossing epithets and bald hatred with casual malevolence. When Irene hurriedly leaves, watching the door to the suite almost clip Clare’s face, there is a sonically-bolstered sense that the Pandora’s box she briefly stepped into would best remain closed.

Of course, that would make for an entirely different movie. Though Irene studiously avoids Clare’s subsequent letter, and vocally disparages her friend’s choices to the agreement of her occasionally embittered doctor husband Brian (an empathetic and multifaceted André Holland), Clare shows up on her doorstep anyway, charming her sons and housekeeper Zulena (Ashley Ware Jenkins) alike. Clare soon becomes inextricable from Irene’s world, save for the moments when she reluctantly returns to her own white family. In Irene’s perfectly outfitted, dark-paneled Harlem brownstone (its character a testament to production designer Nora Mendis), Clare becomes a disturbance of a façade, and an outlet for the sexual stagnancy of Irene and Brian’s marriage.

Some of the most thrilling moments of Passing occur when the camera becomes Irene’s eyes, breathing new life into her blood by way of Clare’s embrace of the sunlight, or Clare’s muscles shifting in her backless dress, prompting Irene to reach for her without conscious thought. The two share only a few real touches, but cinematographer Eduard Grau’s 4:3 compositions evocatively make the most out of them, with another standout shot being Clare and Irene’s tearful, protective embrace underneath a lushly tree-lined street. Negga and Thompson use every moment of their time together to build a charged, fluctuating relationship, and while their dialogue illuminates some of the specific insecurities and jealousies they feel at each others’ hands, their facial expressions and body language indicate that there’s more left unspoken.

Passing especially (and mostly successfully) relies on Thompson’s performance to hint at what’s locked behind a purposefully placid composure. Irene is so “perfectly satisfied” with her life that she spends much of her time asleep or sleepwalking to avoid conflict or introspection. The film slides into ultra-expressionistic territory to press this point, with domestic items like a sparse bag of groceries, a broken planter, or a smashed teapot completely falling out of Irene’s grasp before she cares to realize it’s gone. The focus on these symbols can sometimes make a sense of time or chronology slippery, but therein lies the risk of an adaptation so dedicated to the literary qualities of its source material.

Ultimately, what I most missed from Passing was the ability to watch it in a theater. A film this carefully crafted deserves an immersive viewing experience that respects all the artists who clearly worked so hard to match Hall’s exacting vision––so get out your good headphones and dim the lights if the film goes directly to streaming. It will be a treat to eventually see Hall’s second filmmaking effort, especially if it is another project treated with as much thoughtful expression and dedicated reverence.