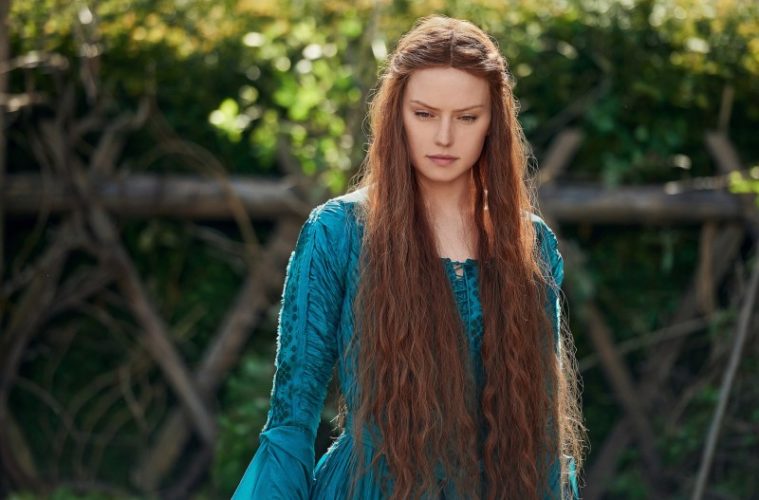 Hamlet gets a perspective flip in this feminist-minded revision, based on the book by Lisa Klein – and, of course, Shakespeare’s play. (I promise not to seed this review with references to the play to show that I took high school lit.) Ophelia, Hamlet’s dogged, innocent admirer ultimately driven to madness and possibly/probably suicide by his cruelty and accidental murder of her father, is here reimagined as a spunky, self-possessed firebrand able to hold her own against any man. A perfectly 21st-century heroine, in other words.

It’s interesting that Ophelia works backward from the premise that Hamlet’s version of the character is in need of “fixing.” I will not deny that many aspects of the Bard’s work are of course Problematic, but it’s uncharitable to say the least to write off the original Ophelia and her treatment as misogynist when the play pays strenuous attention to how Hamlet’s treatment of her and the difficulty of her position as a young woman in her times drives her fate. Is it truly making a feminist statement to rewrite something just to give a woman a happy ending, at the expense of reducing her complexity as a character? But enough mansplaining – even if the conceit is faulty, that doesn’t mean it’s impossible for this film to rework this material into an intelligent riff on the play. Unfortunately, it still doesn’t.

For one thing, the movie’s idea of making Ophelia (played by Daisy Ridley) a more contemporarily acceptable female lead is mainly to give her good role model qualities, like a love of learning, without granting her much actual interiority besides being upset about all the scheming around her. She still acts mainly as a bystander to someone else’s story. It’s a little bit of Rosencratz and Guildenstern Are Dead and Wicked mixed together, showing the events of the play from a different POV and also giving us the “real” version of what happened. There are some ideas with potential, such as Ophelia being in on Hamlet’s plot and faking madness as he does (though without the open question of how much of said madness is truly faked), or making the play’s only other female role, Queen Gertrude (Naomi Watts), the biggest supporting character. But none of those threads lead anywhere – Gertrude is mainly obsessed with her youth, and Ophelia’s charade is there to retcon the reasons for her actions in the play without saying anything about female survival tactics, perceptions of female sanity, or the like.

Despite all this, Ophelia is still kind of fun. It’s produced as a full-throated CW network Tumblr-friendly affair, lavishing attention on pretty costumes, leaning heavily on melodramatic acting, and featuring an extremely extra score with lines from Hamlet’s poetry sung breathily. It has absolutely no interest in Shakespearean language; when lines from the play appear, they are modernized. (“Get thee to a nunnery” becomes “Get to a nunnery,” and is meant literally instead of being a veiled reference to a brothel.) Watts is chewing scenery in not one but two roles (the other is a forest witch, and no points for guessing why she plays her too), as is Clive Owen as Claudius (chewing scenery, that is, not playing two roles). George MacKay interprets the famously complex role of Hamlet as an inveterate fuccboi (as the kids say). If the movie had been pitched a lot more toward hormone-addled drama, it could be a delightful Renfaire version of Riverdale. Unfortunately, after an agreeably high-energy opening stretch, the movie settles into a fairly sedate mode it can’t pull out of.