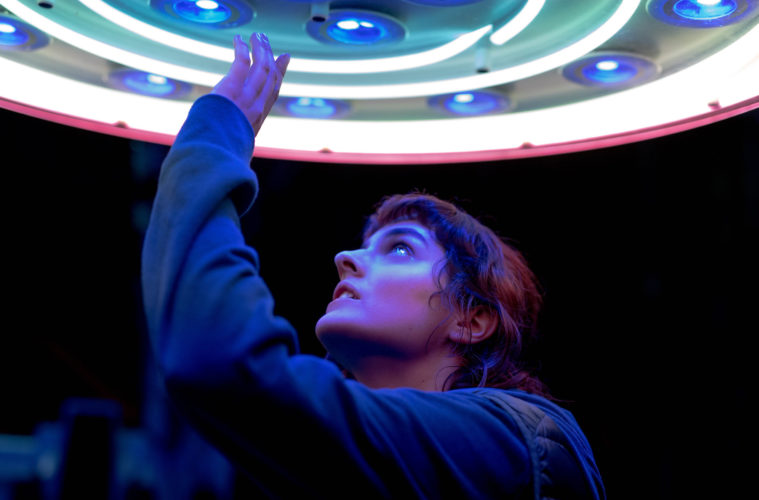 “Another day working as the nighttime janitor at the tiny French amusement park. Everyone keeps asking me if they can fuck the Tilt-A-Whirl ride. Buddy, they won’t even let me fuck it.”

This line isn’t precisely in the script, but as if adapted from the mind of dril, the new drama Jumbo follows Jeanne (Portrait of a Lady on Fire star Noémie Merlant) and her intense, erotic, and heartfelt relationship with the new attraction at the theme park she works at. A five-armed spectacle of excitement and thrills, the ride is given some loosely sketched-out psychology in the form of fantastical neon light responses and electronic, almost alien humming as the two converse, but the story’s perspective is tied solely with Jeanne. As intriguing a narrative set-up as this might be, Zoé Wittock’s feature debut sways too emotionally simplistic and cookie-cooker in structure to rouse up much passion. Simply put, one wonders what kind of visceral, outré energy a director like David Cronenberg or Claire Denis could have brought to such material.

When the timid, isolated Jeanne isn’t cleaning up at the theme park, she’s locked in her room tinkering with no shortage of electrical-based inventions, from whirring mini versions of the rides at her job to extravagant lighting set-ups. With an outlook on life that’s diametrically opposed to her mother Margarette (Emmanuelle Bercot), Jeanne isn’t interested in beginning a relationship with the childish men in her town or doing much of anything outside of her work and home. On the other hand, Margarette is burned by a relationship gone sour with Jeanne’s father and isn’t shy about conveying the importance of liberal sexual freedom, including the need for orgasms, to her daughter. As her mother soon finds out, Jeanne is finding all the satisfaction she needs with the electric-powered ride Jumbo, as she nicknames it.

Conveying a sexual awakening with a similar amount of curiosity and passion as in her breakout role in Portrait of a Lady on Fire, Merlant sells the emotion on her end when it comes to this burgeoning relationship. A heart-felt meet-cute features a pulsing, extravagant display of lights. Then the consummation of their relationship centers on a topless Jeanne in an evocative Under the Skin-esque fantasy sequence in which oil slowly overtakes her entire body. Wittock brings a vision to some of these scenes, selling the believability of Jeanne’s intense attraction to the… attraction.

Yet there’s also a muddled anthropomorphization when it comes to her object of love and–as silly as it is to say–leaps in logic that distract from the intended emotional arc at the center. By having the rest of the story be relatively grounded, but not clearly defining the reciprocal emotions of the ride–revealed in life-saving maneuvers and otherworldly bursts of electronic exuberance–our mind wanders to the real-life implications of such a relationship and, in the world that has been set up, what is going through the psyche of the ride. Quick cutaways to Jumbo, overly excited in Jeanne’s presence, produce momentary moments of awe, but it quickly fades as we return to a rather conventional family drama, quickly expanded to feature a new member, Hubert (Sam Louwyck), Margarette’s new boyfriend following a one-night stand.

For what could have been a rather radical look at sexual identity and what defines love, Wittock falls a little too deep into tropes, not unlike another recent drama of forbidden love, The Shape of Water. There’s a deeply contrived climax involving every notable cast member converging, followed by a slow-motion shot in which the characters run in jubilation towards the camera as a feel-good needle drop occurs. It’s the kind of cheap finale that seems requisite for an indie dramedy to smother any potential complexity and leave the audience smiling.

We also know those around Jeanne disprove of her relationship and treat her like an outcast, but she seemingly still gets free reign of the park whenever she pleases even after a number of incidents. The strained relationship with her mother is also a throughline, but it unevenly overtakes the last third of the film, as if there was not much else to say about Jeanne’s new romance. It may sound nit-picky to key on these narrative irregularities, but with a story like this, Wittock needs to do everything in her power to sell what’s been constructed, and it often feels like a more simplistic way out is taken. The end result is more of a confounded shrug in which the metaphors for romantic freedom and breaking the barriers of a certain path prescribed by society ring true, but the world that’s set up is far from fully realized.