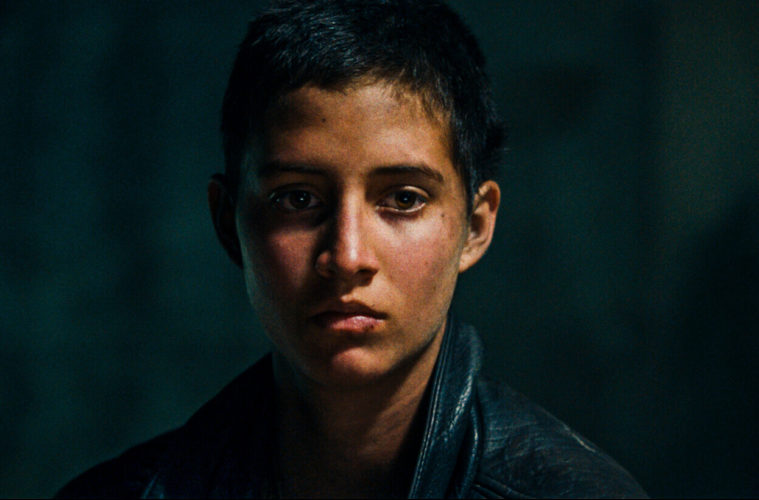 Sundance Review: ‘Monos’ is a Brutal, Unflinching Immersion into the Guerrilla Warfare of Latin America

There’s a preternatural feel to the opening sequences of Monos, the brutal, unflinching third film from Colombian-Ecuadorian filmmaker Alejandro Landes (Cocalero, Porfirio). As if we’re floating through clouds at the edge of the world, we witness a group of children, blindfolded, playing soccer, the fear instilled that a misaimed kick could send the ball hurling into the unknown oblivion below. With information patiently, sparingly doled out–even up until the final moments–we learn this tight-knit clan is, in fact, a rebel group in the mountains of Latin America, sporadically visited by a commander but mostly given orders through a radio. Left to their own devices, the two most crucial responsibilities they are given are to care for a cow named Shakira and oversee a kidnapped American engineer, only referred to as Doctora (Julianne Nicholson).

Going by nicknames such as Rambo, Smurf, Bigfoot, Wolf, and Boom-Boom, Landes is less interested in fleshing out these characters as much as he is in exploring the unforgiving and elemental world they inhabit. Raised by themselves, these teenagers are stripped of identity and morales in early sequences that have the physicality of Claire Denis’ Beau Travail. For their birthday, they beat each other senseless as a celebration and fire their automatic rifles as if it’s the only way they can feel anything. Their burgeoning sexuality is played out with no preference for gender (one in the group, Rambo’s Sofia Buenaventura, could even be described as gender-nonconforming) as they request to “partner” up with whomever they choose. This an environment dictated only by their mission–the ideology of which is never disclosed–and the harsh conditions that surround them. While they care for their cow and their hostage, when something goes awry, it sets them on an adventure for survival in which their loyalty to the greater cause is tested.

Intentionally suffocating in its aesthetic, cinematographer Jasper Wolf’s camera moves with a fierceness as the characters’ unpredictable movements dictate what our eyes follow–sometimes we are literally focused on the eyes of our leads as the fourth wall breaks, including a final moment that feels like a cheap call-to-action for the viewer. In a few scenes, the HD image switches to the lo-fi digital camcorder their commander carries, creating a more confessional vibe of stark realism as he interrogates his soldiers and the breakdown of their group. As we’re wrung through this grueling journey, there a number of impressive visual touches from Landes. One striking single take is an overhead shot of a dead soldier’s belongings, carefully placed across a table. While one immediately thinks of a Wes Anderson-esque set-up, it turns grim as an entire life becomes reduced to a few items, being snapped up one-by-one by those who live on to fight a fight in which they are losing their mental and physical stamina.

Scored by Under the Skin and Jackie composer Mica Levi, the discordant music is laced with choral tones and used economically to great effect. As the journey moves from the ethereal mountains into the valleys of the jungle and cascading rivers, Levi’s score is woven into the immensely effective sound design as every bullet, punch, and cry is felt. Landes’ technical execution is impeccably calculated to the nth degree, yet there’s a certain emotion that is stifled by his approach. These teenage fighters may have been stripped of any semblance of humanity, but when each scene brings some sort of severe horror there’s an unfortunate repetition to the narrative. As the perspective shifts, even the emotional and physical pain felt by Nicholson’s character isn’t fully explored and the only thing left to feel is a bludgeoning of our senses.

What is more cogently conveyed in this new riff on Lord of the Flies is the failure of an organization when control is given to an unqualified leader who inflicts barbaric dominance on their followers. As the vicious Bigfoot (Moises Arias) assumes control, we watch the slow crumbling of his power and the betrayal of his young outfit. As an intense sociopolitical lesson, Monos certainly sheds vivid light on the costs of war in present-day Colombia, particularly when it comes to taking advantage of minds not yet fully formed. The viscerality will surely leave one shaken, though they may question if the unceasing sadistic acts on display are worth the experience.

Monos premiered at the Sundance Film Festival and opens on September 13.