Sundance Review: Into the Deep is a Riveting, Disturbing Look into a Depraved Mind 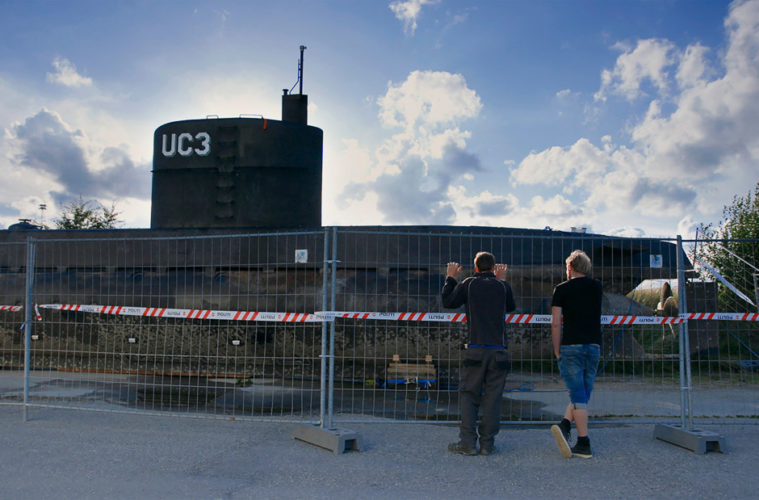 When it comes to the majority of true crime documentaries, the research of every facet of the illegalities in question is a vital, necessary part of the process. It can take years of globe-trotting fact-finding, numerous exhaustive interviews, and a ceaseless dedication to pore over endless documents and data in order to recount the truth and do justice to the victims. Rather than compiling the minutia of every detail after the fact, what if the filmmaker was already embedded with those involved–both the perpetrator and those closest to them–as the events were unfolding?

This is the case when it comes to director Emma Sullivan and her harrowing feature debut Into the Deep, which chronicles her initial journey into profiling Danish inventor Peter Madsen and his team. 18 months into filming the documentary, Madsen murdered and dismembered Swedish journalist Kim Wall. In the wake of this horrible act, Sullivan has the unique opportunity to capture the aftermath of emotions when it comes to those involved as well as examine a wealth of footage to see if there were any warning signs. Due to being in the center of the media tornado that followed and an on-the-fly approach capturing the response in real-time, the documentary is understandably a little rough around the edges. However, as an exploration into the mind of a psychopath and a personal look into the disorienting thought process of those who had once considered Madsen a friend, it’s a deeply upsetting, disturbing descent into the depths of sadistic depravity.

As is the case with most films of this kind, the less known about the specifics of the story, the more stomach-churning the experience will be. Sullivan opens with the August 2017 disappearance of Kim Wall after she boarded Madsen’s homemade submarine then structures the rest in pulse-pounding fashion, detailing the events that led to her already filming a documentary on Madsen followed by the disappearance and the revelations surrounding grisly details of the murder. In Gerwigian Little Women style (and that’s the only comparison between the two films to make), we jump back and forth between each timeline as they both move forward. Instead of a strictly linear A-to-B structure, the background of Madsen’s entrepreneurial enterprise is juxtaposed with the appalling acts to follow, making for an engrossing experience as facts are carefully laid out and certain actions relate to one another in the different timelines. Considering many have likely at least heard the headlines, by highlighting the basics from the start, the disappearance itself is not a reveal, but it’s rather the deconstruction of Madsen’s motivations that is the driving force. Editor Joe Beshenkovsky does suspenseful work in weaving the two threads together for maximum impact, leading to a shocking finale–even if you had previously read every detail of the story.

Having started filming Madsen over a year before the murder, Sullivan not only got to know him, but also those who worked for him and believed in his mission. A Danish Elon Musk type, he had dreams of building submarines and rockets, borne out of a childhood fascination that never ceased. With a cadre of volunteers, mostly young men and women who shared his entrepreneurial spirit and passion for exploration, they had a number of successful projects and work always fervently continued on the next one. Wrapped up in the day-to-day work and their shared achievements, those closest to him couldn’t have foreseen what might occur, but Sullivan is able to retroactively explore Madsen’s strange behavior and authoritarian control through her own footage. Although Madsen had no formal education in engineering nor strong managerial skills, he was a cunning manipulator and bullshit artist, a trait that becomes more prominent the deeper the documentary gets into unpacking how this man could do something so unspeakable.

Since there were no interviews with Madsen post-arrest–only what was gleaned from newspaper headlines and courtroom hearings–Sullivan focuses on the men and women who devoted seemingly every second of free time to Madsen’s mission. Through speaking with this crew and even the filmmaker herself having a hand in the way the story unfolds, Into the Deep becomes an intimate examination of how one’s soul crumbles as the person they idolized is revealed to be a deranged monster. From initially coming to terms that he may have actually murdered Wall all the way to the guilt felt when they reflect how if they didn’t build this submarine, this may not have happened, it’s a chilling look at an optimistic mind can turn utterly defeated and disillusioned.

Considering Sullivan nor the team members working under Madsen spent any time with Wall, much less knew of her existence even though she lived close by, it’s understandable the documentary is more focused on Madsen and the repercussions of his actions. Sullivan highlights some of Wall’s journalistic achievements and perhaps it would’ve been conjecture to speculate any further, but when the overarching takeaway of the documentary is the portrait of a vile, soulless criminal and little is gleaned about Wall and the life that was robbed, one wishes there was a bit more consideration of her story.

A riveting, disturbing look at the warped psyche of a genuinely insane individual, the global platform of Netflix is ideal distribution, and one can imagine the headlines surrounding this case will return upon the film’s release later this year. With jaw-dropping divulgences akin to last year’s Cold Case Hammarskjöld and The Jinx miniseries, especially in its final moments, Into the Deep will leave one with a pit-in-your-stomach revulsion at how viciously depraved humanity can sink to at its lowest. A documentary that is truly hard to shake, it provides an intimate glimpse at true evil living amongst those who only saw the warning signs and red flags after the fact.

Into the Deep premiered at Sundance Film Festival and will be released on Netflix.