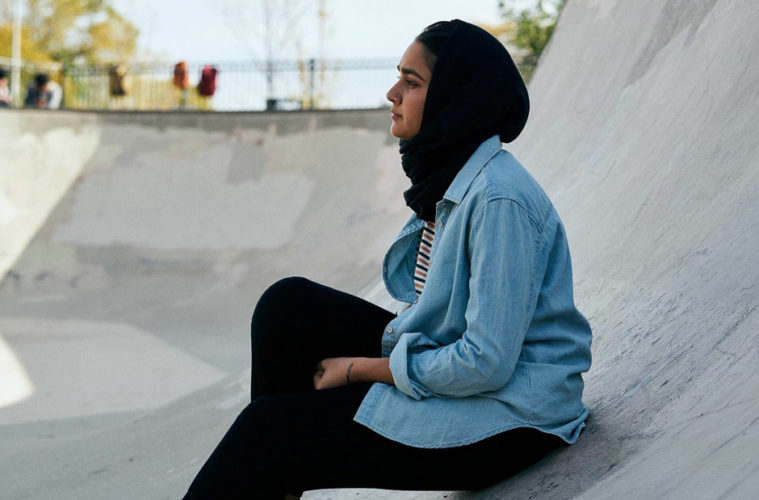 Geraldine Viswanathan, welcome to the rest of your career. The young star, who stole scenes in last year’s comedy Blockers, is the lead in Hala, written and directed by Minhal Baig. She plays the titular character, a Muslim teenager coming to terms with her parents’ expectations, her religion’s expectations, and the expectations she has for herself. Sundance has offered plenty of coming-of-age stories throughout the years. Few are as effective as this one.

As Hala struggles with the social side of high school, she relies on her best friend Melanie (Taylor Marie Blim), who has plans to escape from her own family problems. Hala’s also got a crush on skateboarding classmate Jesse (Jack Kilmer). At home, a chummy relationship with her father Zahid (Azad Khan) fights against a more contentious relationship with her mother Eram (Purbi Joshi). While Hala and her father work on crosswords together, Eram forces herself to play the strict parent.

Viswanathan and Baig are clearly on the same wavelength. Adapted from her short of the same name, the writer/director keeps the camera on her lead actress for the majority of the runtime. The implicit trust between this creative duo allows for some narrative shortcuts and abrupt supporting character beats to happen without much of an effect on the overall experience.

Urged to keep exploring her poetry by her teacher Mr. Lawrence (Gabriel Luna), Hala begins to rebel. At least in the eyes of her parents. Sexual and artistic exploration leads way to later nights with Jesse. “You’re so cool,” she tells him, to which he responds, “I know.” It’s one cute moment of many between a couple of lovely chemistry. Of course, all of this leads to a sea change in her home life. Azad Khan and Purbi Joshi are the most prevalent supporting actors in the film, and they’re tasked with a lot of emotions to navigate. Both do great work here.

Aided by a beautiful score from Mandy Hoffman, the narrative goes where expected while never feeling tired or overly familiar. That stories like this are being made, shown, and now seen by an ever-growing audience is quite heartwarming. That the movie is also this well-crafted is even more important. Baig has something to say and she’s saying it with a strong voice, with specificity wrapped in a structure that’s easy to absorb.

One sincerely hopes that this is the first of many collaborations between Viswanathan and Baig. Rarely do those behind the camera feel as sync with those in front of the camera as what is conveyed in Hala.

Hala premiered at the Sundance Film Festival and opens on November 22.