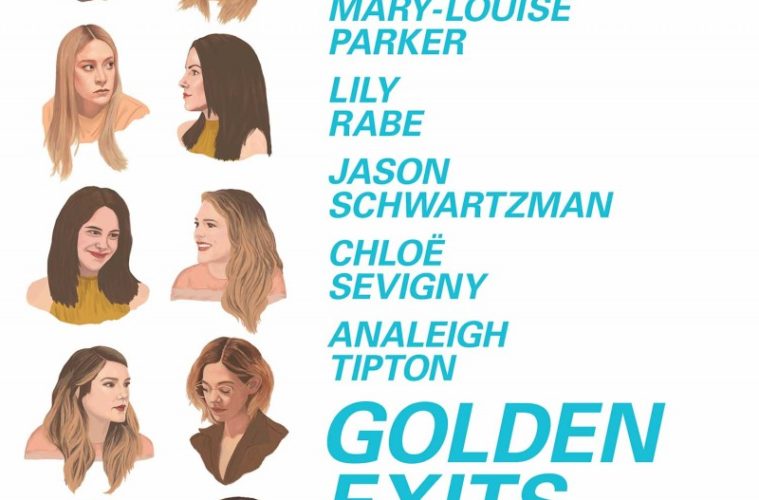 There are no screaming matches or overt arguments, nor is there any sort of frenetic camera work, yet Golden Exits is unmistakably the work of Alex Ross Perry. The insecurities that bubbled up and exploded through his characters in Listen Up Philip and the even-more-heightened Queen of Earth stay grounded with his relatively small-scale latest film, these anxieties rather becoming the subtext for nearly every conversation. It’s a work of small decisions and jabs, glances and non-action. Should I stay at this bar where temptation exists? Should I continue staring at a woman that will only bring upon personal suffering?

It’s these seemingly trivial valleys where the interconnected characters of Golden Exits lie. The axis point is Naomi (Emily Browning), an Australian student who is hired by Nick (Adam Horovitz) to assist in archiving a life’s worth of history left by his recently deceased father-in-law. Nick’s wife, Alyssa (Chloë Sevigny), is a therapist who harbors suspicion about his new hire based on his infidelity years prior. Alyssa’s verbose sister, Gwen (Mary-Louise Parker), fuels this familial fire as Nick’s nemesis.

When she’s not in the cramped quarters of Nick’s basement workplace, Naomi reaches out to Buddy (Jason Schwartzman), a family friend who she hasn’t seen since was five, to re-connect. Though clearly attracted to her, he smooths this over with his wife and co-worker Jess (Analeigh Tipton) by downplaying his interests, initially promising only three meet-ups to Naomi. Rounding out the connection is Gwen’s personal assistant, Sam (Lily Rabe), who is the sister of Jess, and, like Naomi, must weather the bitterness between her boss and Nick.

It sounds like a great deal of moving parts, but the writer-director makes ample room and depth for each character. Attracted to the innocent sweetness of Naomi, Nick keeps an arm’s length away from her during their workday, but his eyes do all the talking. With his unshaven face and dweeby magnetic glasses, unclipped when he wants to converse, it’s these little character touches that create a remarkably lived-in world.

Parker’s Gwen, the most acerbic of the ensemble, gives advice to Naomi that includes guidance to “f*ck her way through the city” while demeaning Nick at every chance she gets. Schwartzman, who may engender the most empathy outside of Naomi, gets away with little lies about how much time he spent with Naomi all while clearly adoring his wife, who works with him at his sound-recording studio. It’s a grey area of commitment difficult to convey while still retaining sympathy for all sides, but the director pulls it off splendidly.

Playing at a more relaxed rhythm, Perry weaves in between these more statically composed, close-up-heavy conversations, often between just a pair of the aforementioned cast, thanks to beautiful transitions by cinematographer Sean Price Williams, who once again uses grainy, textured 16mm to capture the Brooklyn cityscape — and one Manhattan trip to Anthology Film Archives. Keegan DeWitt‘s piano-heavy melodies also help to string this tapestry together, forming a connective tissue from scene to scene.

One of the most illuminating scenes finds Rabe’s Sam discussing the ties between family and work. In a work relationship, no matter how awful it may be going, there’s that titular moment in the back of one’s mind when one will be able to leave it behind and move on. In a family, there’s no such happy ending. No matter how much Naomi becomes the catalyst for generation-long resentment, through his context, her ending is an optimistic one. In the film’s perfectly haunting opening, Browning’s character does a subdued rendition of Ace Frehley’s “New York Groove.” Over the next clearly delineated weeks, the groove she finds herself in is one of cheery disregard over these two malfunctioning families.

This tightrope of minuscule action and inaction is the make-up of Golden Exits’ downtempo narrative thrust. Avoiding the tropes of virtually every other film of this ilk, there is no poignant breakthrough of self-realization nor a climactic scene where the characters become aware of the connection between these relationships and a clash occurs. This relatively subdued approach can initially register as narratively insubstantial, but considering how intricately Perry carves out the understated instincts of each of these characters, it’s easily his most humane and emotionally complex film.

Golden Exits premiered at the Sundance Film Festival and opens on February 9, 2018.