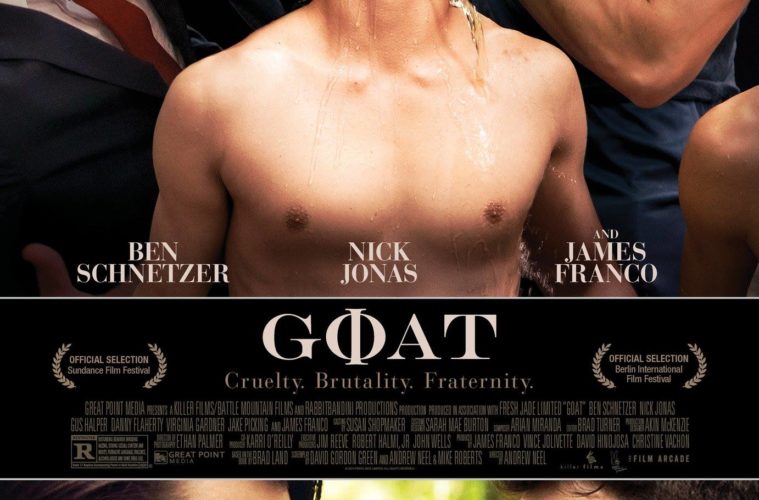 There are no volunteer events, community service or positive team-building exercises to be found in Goat. Director Andrew Neel is focused instead on the most vile tendencies related to frat life, notably hazing, but also the larger picture of the addictive cycle of mutually assured self-destruction. Zeroing in a perverse voyeurism of the degrading activities carried out, the environment effectively convinces even if the script (written by Neel, David Gordon Green and Mike Roberts) often comes up short.

Based on Brad Land‘s memoir, we first find Brad (Ben Schnetzer) leaving a party early, foolishly deciding to give two sketchy men a quick ride home. Things start to get uneasy as they drive far past the initially promised distance, and eventually, Brad gets beat to a pulp and his car stolen. Spending the summer healing, he contemplates going back to school at Brookman University (a fictitious place, but shot in Cincinnati, Ohio) and perhaps pledging to the frat of his older brother Brett (Nick Jonas). He attends a party with the brothers of Phi Sigma Mu, which convinces him to begin a semester of homoerotic horror.

The dynamics at play are laid out immediately, if not the opening credit sequence, featuring slow-motion close-ups of the shirtless frat brothers jumping and screaming towards the ground, presumably at groveling pledges. An early cameo from producer James Franco shows the not-too-distant for most of the current brothers. As the wildest man during the class of 2000, he still clings to his glory days despite having a family. Instead of caring to them, his supposedly quick visit turns to heavy drinking and a night on the frat’s coach sleeping in his own vomit. As Brett starts to realize that none of this matters, and is found more in his room studying than on the floors of the frat house torturing pledges, Jonas brings a welcome dimension simply missing in the rest of his frat mates. Schnetzer is the stand-out here though, giving a pathos and sensitivity to his situation and particularly how it relates to his past assault and current relationship with his brother.

When it comes to their dynamic, and expanded upon with a few other members, the film’s look at how unadulterated masculinity is a substitute for genuine expression is an interesting one, however a bit diluted. Telling us little new about the horrors of hazing that Todd Phillips’ documentary Frat House didn’t already do at Sundance nearly two decades ago, Goat is a compelling watch, but in the end, its themes are a bit muddled, and certainly not unique.

Goat premiered at the 2016 Sundance Film Festival and will open on September 23.