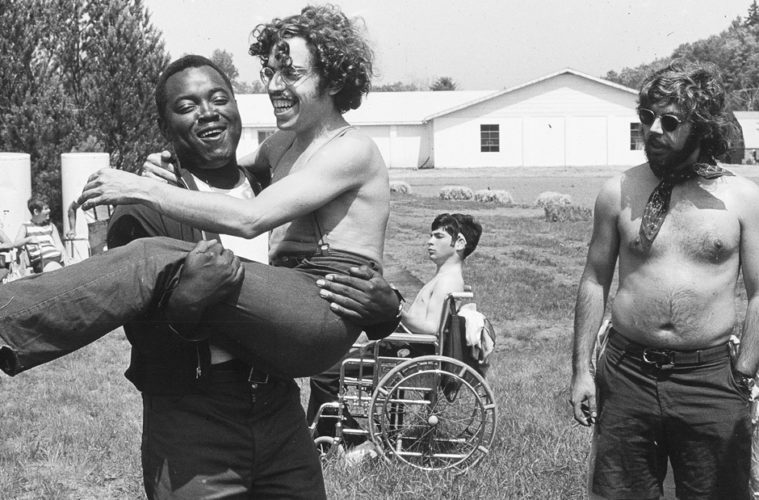 Three hours north of New York City in a modest summer camp near Woodstock, the foundation was laid for what would become a monumental change for millions of people. The year is 1971 and Camp Jened aka “Crip Camp” is a safe haven for disabled teens. A byproduct of the social experimentation at the time, this hippie-run camp gave those that attended a place where they could openly speak their mind when schools and the world at large perpetually isolated them. At home, they wouldn’t even be picked for a baseball team. Here, they all went up to bat. This empowering encouragement was bittersweet, however, as they knew after the few weeks at camp, the world outside they would return to was not built for them. With Crip Camp, directors Nicole Newnham and Jim LeBrecht craft an inspiring story of the tight-knight community that was formed and also the difficult, decades-long road to equality.

While tried and true elements of the documentary form are implemented–talking head interviews mixed with a wealth of archival material laid across a familiar structure with a rousing score–this is far from a clinical retelling of history. The directors key in on the humanity of this struggle every step of the way with a few key members, including the charismatic co-director LeBrecht himself, a member of the camp. Born with spina bifida, as a young boy he wasn’t accepted into Boy Scouts and was forced to develop an outgoing personality because no one would approach him in his wheelchair. While at camp, he was learning his body wasn’t working as intended, but when that’s the case for everyone bunking next to you, there’s a shared camaraderie and optimism for the situation.

In one of the most moving scenes, we see the change in self-esteem when an open mic is available to share their views, when on the outside, they are often silenced and a neglected afterthought. It’s not all heart-tugging moments of inspiration though, as the filmmaker detail no shortage of the kind of irreverent fun to be had at such a camp, including some kissing lessons that turn in a breakout of crabs, relayed in a humorous fashion. Due to the conversations and experiences at this utopia, it caused a sudden realization in their minds: if life is so good here, how can we forge the same experience for not only ourselves but disabled people everywhere across the world in everyday life?

And, just like that, the disability rights movement was born. Just when the wealth of amateur black-and-white footage in the first act begins to feel a bit tedious, the directors greatly open up their scope as the story expands from this tiny kernel of inspiration to a history-shifting fight that would lead to the White House. With the government fearful of the costs it would take for every establishment and employer to adhere to accessibility requirements and equal rights for those with disabilities, the fight was a prolonged one, taking more than two decades since this pivotal camp meet-up for the Americans with Disabilities Act to actually go into effect. The journey in between and one that continues today–led by counselor-turned-activist Judy Heumann–featured protests blocking traffic on the streets of NYC all the way to a weeks-long stand-in in San Francisco to showing up right outside of Jimmy Carter’s church, in which he sneakily avoided the demand for action.

Since the film is extremely specific in detailing this fight for justice, by deeply focusing on the intricacies of this fight it also shows the work needed to move the needle for other similar social changes. Signed petitions and voicing one’s opinion is all well and good, but it takes people on the ground willing to fight the struggle, bit by bit including every setback, for a genuine revolution in societal discrimination to occur. As their movement grew stronger and louder, it’s stirring to see the unwavering support other similarly marginalized groups provided, from the Black Panthers giving free meals during their stand-in to organizations around the country standing up for equal rights.

“The world wants us dead,” says one disabled activist. Every day, they must decide to fight for survival, but that inherent anger could also be turned into a drive for something powerful. Backed by Barack and Michelle Obama’s Higher Ground production company (who become attached to one of last year’s best Sundance documentaries, American Factory), Crip Camp is both an inspiring historical document of a grass-roots movement but also an urgent call to action for those on the sidelines of ongoing political and societal battles. Even though the monumental ADA act was passed in 1990, in large part thanks to those captured in this documentary, the fight for complete acceptance in society towards those with individuals with disabilities is an ongoing one. Anyone watching this will certainly be emotionally moved, but they will also hopefully be moved to action.

Crip Camp premiered at Sundance Film Festival and will be released on Netflix in March.