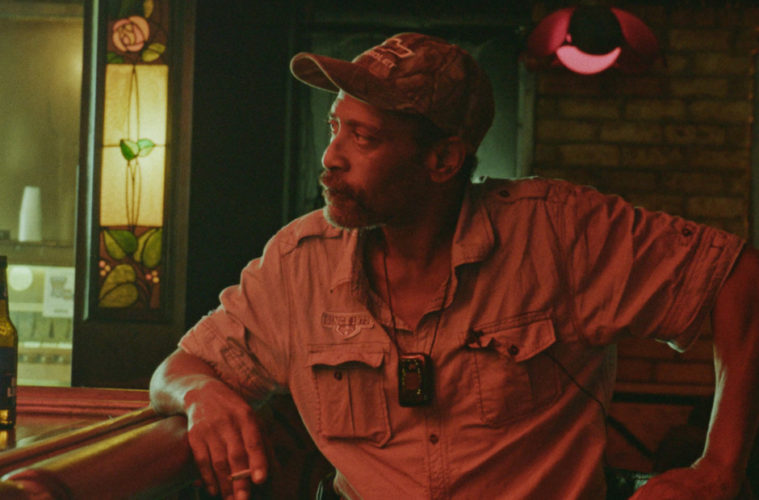 “When he was dry, he believed it was alcohol he needed, but when he had a few drinks in him, he knew it was something else, possibly a woman; and when he had it all–cash, booze, and a wife–he couldn’t be distracted from the great emptiness that was always falling through him and never hit the ground.” – Denis Johnson

With their latest film Bloody Nose, Empty Pockets, brothers Bill Ross IV and Turner Ross turn their lens on that warmly inviting, idyllically dingy, and endlessly lively microcosm of society: the dive bar. Premiering in the U.S. Documentary Competition section at Sundance, the filmmakers behind Western and Tchoupitoulas once again break the boundaries of such a programmatic box, using a casted ensemble, a scouted location, a vérité style, and the loosest of scripted ideas to explore community, pain, and regrets in America circa 2016—and particularly the unfiltered honesty in which these themes can be conveyed when a ceaseless stream of alcohol is involved. This collection of lost souls and inquiry into their perspective on life results in a tale of profound authenticity and devastating heartbreak.

The unassuming bar Roaring 20’s [sic] is located in Terrytown, Louisiana—a suburb near the Ross’ home base of New Orleans—but for the purposes of their story, they set it in the outskirts of Las Vegas, the neon-lit city of sin and fortune that we only get evocative, abstract glimpses of in brief transitions. Otherwise, we’re strictly privy to a day in the life of this homily locale and its diverse patrons that, as they put it, have one thing in common: in a world that treats them like shit, they can come to this bar and feel like family. With a cast of around a dozen, we get the closest to Michael, an aging drunk and has-been actor who shows empathy for those around him through endless chatter when he’s not sleeping off his buzz on the bar’s shabby couch.

To the show the insular cycle of early foolhardy promise, joyful community, a few too many drinks, bad decisions, and the hangovers to follow, the majority of the film was captured in an 18-hour, two-camera non-stop shoot and the Ross brothers are not shy to show their involvement. We see their camera glide by the establishment’s many mirrors as they weave in and out of elongated conversations and impromptu dances when a favorite song kicks on in the jukebox. More than just an observational eye, their intimate cinematography achieves a sublime, Cassavettes-esque perspective in which we feel like we’re another patron in the bar experiencing the highs and lows. A guitar performance from the daytime bartender causes wistful tears from patrons and when a fight is on the verge of erupting, we’re placed right in the middle of it. By threading a fictional needle into the documentary conceit that’s been set up, one could argue the choreography could have been carefully laid out, but their skill in being at the perfect place in each moment over this relatively brief shoot is too masterful to be merely following a plan. The Ross brothers’ peerless intuition is a quality that also transfers to their probing of the emotional layers and wavelengths to pick up on as the day progresses.

The directing duo superbly capture the vibe of fleeting excitement and daytime dullness as a bustling world of life and work unfold right outside the door. Price is Right, Jeopardy, TD Jakes, and–in a perfect encapsulation of the drunk dreamer–a Plan a Cruise special, all drone on at the TV behind the bar. While those sitting at the bar each bring their own personalities, there’s also plenty to be had in the establishment itself. Playful signs earn a laugh, such as, “Please do not throw cigarette butts in the urinal. It makes them soggy and hard to light.” Whereas others, like the Compulsive Gamblers Anonymous hotline on the window, hint at the unspoken despair that a perpetual return to these vices can bring. It’s this theme of a promising life being continually on the verge of destruction that rings most acute through Bloody Nose, Empty Pockets. In the film’s finest scene, deep into the night one of the younger people at the bar–an aspiring musician with some charm–pays a visit to Michael on his couch and what follows is a devastatingly moving plea as the older man begs the younger: “Get out of this bar. Don’t waste your life like me.”

As the world outside of the bar becomes further divided, the Ross brothers capture a disparate community bonded by a shared loneliness that disappears upon entering these doors. With perhaps a heightened theatricality in performance due to an atypical approach in expressing non-fiction truths, the endlessly sympathetic characters fully pour their hearts out with all the pain attached. Whether it is a veteran cast aside due to the government’s treatment or a son abandoned by his family or, as Michael puts it, the luck of life simply not adding up for him, Bloody Nose, Empty Pockets is a tender patchwork of lost souls carving out their own family. One character exclaims upon crossing a street with no regard for traffic that he must always stay in motion, and the Ross brothers take this idea to heart. No matter life’s obstacles, their world is one of constant movement and excitement–until you black out at the bar and it’s time to take a shot and get ready for the day again.