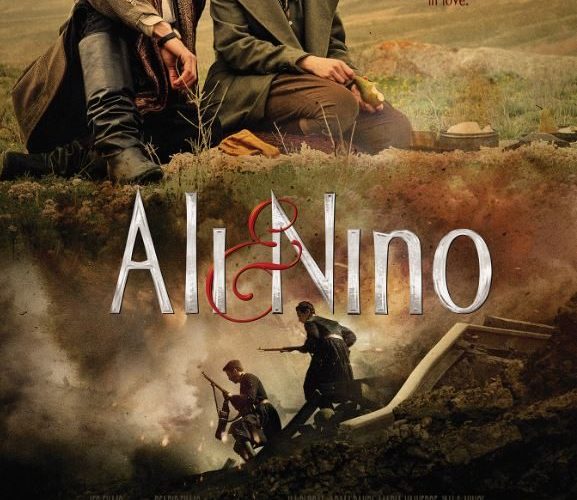 There is nary a film genre more tried and true than the war-time romance. From Casablanca to Doctor Zhivago to The English Patient, the structure allows for a micro conflict injected into a macro scenario. From a script by Christopher Hampton (Dangerous Liasons, Atonement), adapted from the novel under the pseudonym Kurban Said, and directed by Asif Kapadia (Senna, Amy), Ali and Nino strives for the status of epic but falls considerably short.

Starring Adam Bakri as Ali Khan Shirvanshir, a young Muslim Azerbaijani man who falls in love with Nino Kipiani (María Valverde), a Georgian princess, the film is set in and around Baku, the capital city of Azerbaijan on the brink of the Bolshevik Revolution. The couple hopes to marry quickly, but the rumblings of war postpone everything. Nino’s parents (Mandy Patinkin and a woefully-miscast Connie Nielsen) are convinced the conflict will be over in months. Ali won’t have it, enlisting Nino’s family friend, the Armenian Melik Nachararyan, to help convince her parents he’s the man for her.

Instead, Melik kidnaps Nino with the intention of taking her for his own. In a fit of rage, Ali kills Melik and is forced to flee the city. And so the stars cross on this romance, a theme that fuels the rest of the narrative. As the Muslims of Azerbaijan begin to revolt against the Russians they once fought alongside, Ali feels compelled to join to his brothers in the fight for independence, Ali forced to conform to traditionalist ideals she was raised to resist.

Plenty to chew on, no doubt — perhaps too much, in fact. The world Kapadia builds feels too small. Not enough extras to fill out the background, not enough wide frames from cinematographer Gökhan Tiryaki to relay the scope of this grand romance. If we are meant to believe in the tragic love of these two, we need to believe in the international conflict they are wrapped up in.

The dialogue and performances are wooden and the plot feels rushed, as though we are seeing a crudely-abridged version of a renowned tale. Certain details work, including a beautiful score by Dario Marianelli (also Atonement) and a particularly effective battle scene about midway through.

Kapadia has marked his place as a truly great documentarian, and one imagines he’s got a great narrative film in him somewhere. Ali and Nino too often feels like an adaptation with a reach that exceeds its grasp.

Ali and Nino premiered at the 2016 Sundance Film Festival and opens on November 18.