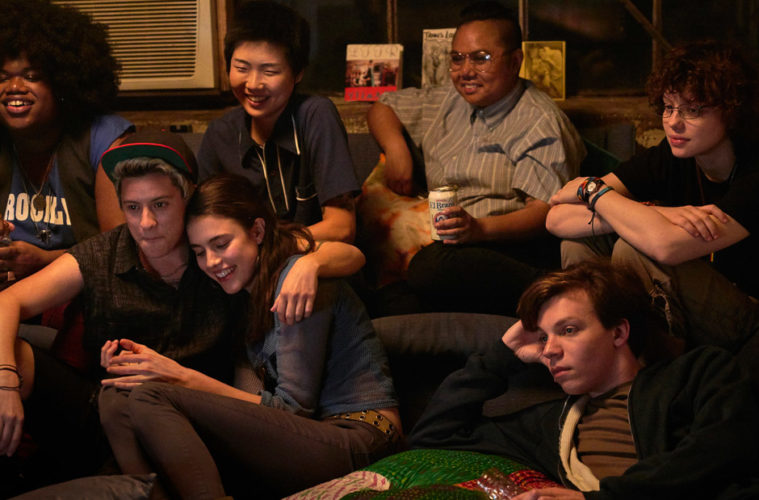 Sundance Review: ‘Adam’ is a Frustrating, Empathetic Immersion into an Evolving LGBTQ Community

There’s a specific kind of warm, crowd-pleasing aesthetic–often in the coming-of-age subgenre–that seems to find a home among the Sundance programming more so than any other festival. A few years ago, Sean Baker’s Tangerine heralded a major breakthrough for transgender representation in cinema and broke this mold in formally compelling ways. For better or worse, Adam has now arrived to fit more in the aforementioned lighthearted, simplistic, but ultimately empathetic dramedy conceit.

Directed by Rhys Ernst and written by Ariel Schrag (based on her own 2014 novel), the film follows Adam (Nicholas Alexander), a sheltered high schooler who spends the summer of 2006 with his sister Casey (Margaret Qualley), who is immersed in Brooklyn’s LGBTQ+ community. As they jump around from queer bars to The L Word viewing parties to marriage equality rallies to S&M clubs, Adam’s understanding of sexual identity gets expanded, particularly so when it comes to a new relationship. He is immediately smitten by Gillian (Bobbi Salvör Menuez) and the affectation seems mutual, but when she mistakes that he is trans, he goes along with it and this case of mistaken identity is the crux of the film’s dramatic arc.

It is this familiar, frustrating trope that is a double-edged sword. There’s no question that Ernst and Schrag bring an impressive level of specificity and insight into this world that is simply missing from mainstream American independent filmmaking. On the other hand, through this story of vexing deceit, they also intend for Adam to be a likable protagonist and his destructive behavior to be ultimately vindicated. With a narrative convention like this, there’s of course the eventual unveiling of the truth and for Gillian, a shared realization/guilt ever so briefly comes up in a wholly short-shrifted, unsatisfying arc.

Where Adam is more successful is the portrayal of a community, and all the joy and strife that comes with new romance and friends, juxtaposed with an outside world that is hostile towards one’s sexual identity. The most fully-realized and empathetic friendship is that of Adam and Casey’s roommate Ethan, played by Leo Sheng. As Adam begins to date Gillian, he goes to Ethan for advice and their evolving companionship is one rendered with a tender emotional honesty, culminating in a moving conclusion. I would be remiss to fail to mention Ethan also works at Film Forum, and Ernst’s meticulous depiction of the NYC cultural institution is highly amusing.

Adam is also the rare 2000s-era period film and, like the recent Lady Bird, its cultural reference points will ring true to anyone from the era. Laguna Beach posters are on the walls and jokes about M. Night Shyamalan and Lady in the Water are bandied about. The technological advances of the era also marks a key moment in connecting with those one might have otherwise not known. Adam searches on YouTube to get familiarity with the trans experience and he’s met with a wave of inspiring videos of those sharing their testimonies. The depiction of a shared struggle and finally being able to make a connection is one of Adam’s most successful themes. Gillian, who made headlines in high school for going to prom with her girlfriend in their conservative town, is also a testament to the importance of LGBTQ+ representation in culture to make others feel less alone–particularly Casey’s roommate, who reveals how crucial of an idol she was as someone struggling with their sexual identity.

Schrag’s original novel was met with controversy–especially amongst the trans community–and while some of the more contentious aspects have been softened for the adaptation, it wouldn’t be surprising if the film inspired similar disputes. While Adam seems almost like a rite of passage before we get more complex trans dramas in mainstream filmmaking, one can’t help but feel frustrated by its missed opportunities. In Adam’s struggle to fit in and have his first romantic relationship, he may be exploiting those he’s befriended, but the film itself clearly extends a sympathetic invitation to go inside the humor and hardship of this community.

Adam premiered at the Sundance Film Festival and opens on August 16.