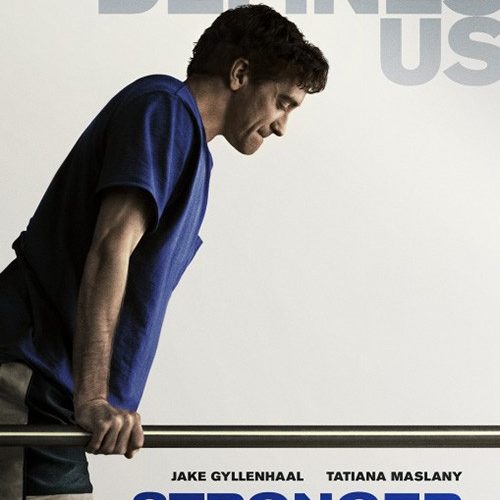 Peter Berg’s take on unsung heroes Patriots Day is barely a year old and here we are with another Boston Marathon bombing film in David Gordon Green’s Stronger. Rather than focus on the event itself, however, John Pollono’s script turns focus squarely onto the shoulders of Jeff Bauman—the terrorist attack’s most recognizable victim. But while he could have easily minimized this man’s struggle into a generic fluff piece of Hollywood inspirational perseverance, he admirably highlights the darkness those “lucky” enough to survive endure instead. We’ve seen the interviews and heard pundits declare Jeff a hero on national TV. We’ve seen his smile waving the Bruins’ flag and throwing a Red Sox pitch. Pollono and Green make it their duty to show what’s missing from those images: the pain concealed beneath.

Our country is owned by reality TV and the 24-hour news cycle to the point where people are commodities worth emotional currency. Vultures swoop down as soon as tragedy strikes to be the first to earn the public’s attention. They package their subject into a marketable box deluded in the notion it’s for his or her benefit—this exposure will open doors to money, assistance, or recognition. It also drives their ratings. Publicity stunts are called stunts because people blind enough to see them as wholly altruistic aren’t idealists. They’re the problem. They vicariously absorb trauma and elation, wanting a piece of history for selfish reasons beyond appreciation whether intentional or not. Some targets of such behavior do soak it in. That doesn’t, however, mean it’s okay to assume others aren’t psychologically devastated.

Rather than show Jeff (Jake Gyllenhaal) as a beacon of hope simply because he lived, the filmmakers (surely in large part due to Bauman and his book’s co-writer Bret Witter’s presentation) portray the authentic push back to that assumption. This man lost his legs. He was on the ground as screams pierced the air and burnt flesh entered his nostrils. No matter how flippant or funny he is with family and friends as a means to comfort and quell their obvious worry, every interview or appearance brings that horror back. This isn’t to say those media moments don’t also inspire. It just means his emotional state must be considered. The noise to honesty ratio is skewed so poorly that we forget people like Jeff aren’t celebrities. They are survivors haunted by PTSD grief, terror, and guilt.

This is what pushes Stronger beyond the biopic clichés it must use to make the substance beneath palatable. While the world hails Jeff as a hero who lived and helped the FBI by telling of his brush with the bomber, he’s drowning. While his family (Miranda Richardson and Clancy Brown play his parents Patty and Jeff Sr.) gets lost in the fame and love for their son, he’s being smothered by platitudes and catch-phrases that mean absolutely nothing to him. What did he do to earn this? The whole reason he was even at the finish line was to try and win his ex-girlfriend (Tatiana Maslany’s Erin) back by showing up for once and not being a disappointment. And what do those words or TV appearances supply him besides crippling memories only a drunken stupor can numb?

Luckily for him, Erin understands. Being the reason for why he was there has her feeling as illogically guilty as him. She sees past the joy of his survival to the obvious pain in his eyes. She knows he’s too non-confrontational when it comes to his mother to say no to any new and exciting development she creates. But it isn’t a sense of responsibility that makes her stay by his side. Erin does love him despite his flaws. She knows he needs help that a drunken mother and temperamental father cannot provide and will be there like she always has. And while it’s a godsend at first, her being the rock means the others are off the hook. They can embrace the circus of it all and ignore what Jeff isn’t telling them.

Green and his actors brilliantly project a theme of “tough guy” persona. Why cry when you can deliver a sarcastic barb? Why believe anyone not as sports savvy or blue collar as you has something genuine to say or kind to do? Vulnerability is shown to be a weakness with the Baumans as their defense mechanisms multiply any time their jubilation isn’t reciprocated. Nothing they do is wrong; those who say it is just don’t understand. And despite what we all saw on TV, Jeff falls in the latter camp. He’s broken and hurting and putting on a brave face, but it’s all too much. Erin does what she can, but giving him what he needs only makes him feel more helpless. This is the complexity so often forgotten in these circumstances.

So the dynamic between Gyllenhaal and Maslany is crucial for success. We need to believe their love for each other in the tender moments and the explosive ones. The closeness they share means that they will be the first ones to help and let down each other depending on how bad a day was had. Support is therefore as much about putting up with the nonsense you know is hiding a different truth as walking away when the other party refuses to open his/her eyes. Both actors will devastate with their rage and fear. She’s desperate for him to recognize the difficulties she withstands—the schizophrenic back and forth dictated by his depression. And he’s struggling to cope with survivor’s guilt no pat on the back will ever negate.

Richardson steals some scenes too as a more compassionate and sometimes self-aware version of Melissa Leo’s character in The Fighter. How she manipulates her son is damaging and his allowing it to continue more so, but there is common ground. There is legitimate worth in what she’s trying to do even if she could never explain what it is. Heck, Jeff couldn’t either. But who could blame him for feeling selfish about his plight? Who could blame him for pitying himself and hating himself without knowing just how important his survival is to people as broken as him for different reasons? There’s an inherent responsibility to the type of exposure Jeff is afforded. It’s not fair, but the spotlight makes him a role model. This means his surrender holds as much weight as his strength.

It’s therefore the film’s job to wade through the noise and find those powerful turning points for Jeff and the audience. This story can’t skate purely on the drama of whether this man has the mental fortitude to never give up and walk again. It needs to describe the private turmoil that never goes away. It needs to not gloss over the bad days for good in a bid to not tarnish an image that was never true to begin with. Gyllenhaal is onscreen pouring his heart and soul into an imperfect man who’s made more inspiring for being so. The TV made Jeff into a hero for a hurting populace able to forget him when the next news cycle begins. Cinema now makes him one for those struggling with similar demons that don’t just fade away.

Stronger premiered at the Toronto International Film Festival and opens on September 22.