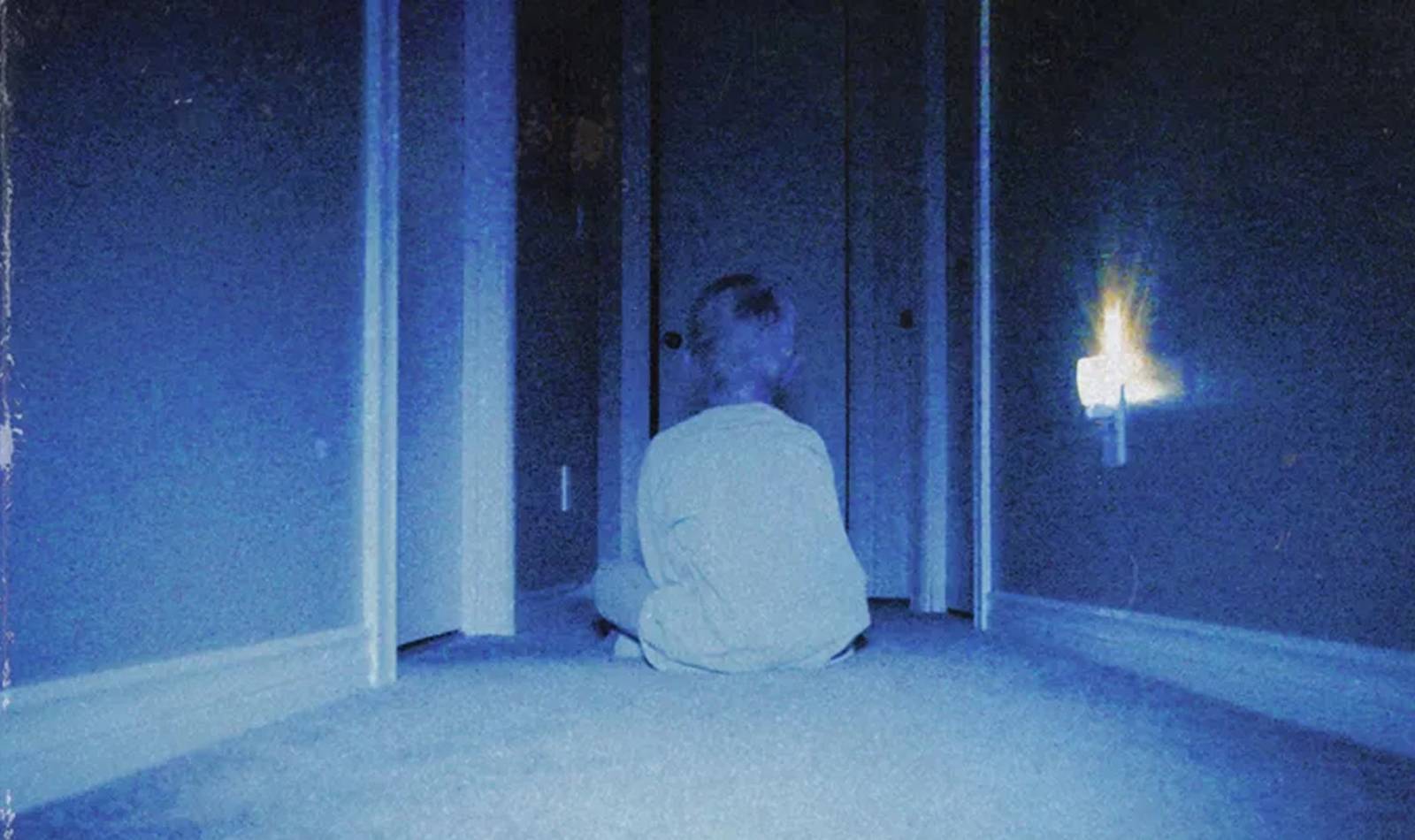 “1995” declares a 1970s-style title card in the opening minutes of Kyle Edward Ball’s Skinamarink, a film presented in fake grain filters meant to suggest the scratchy 35mm video nasties of that era (the ‘70s, not the ‘90s). The date proves totally irrelevant to Skinamarink’s minimal plot; at best it vaguely informs the technology we see in the two-story suburban household where the entire film takes place. This might pass as a conscious irony, but over the ensuing 100 minutes it becomes far more plausible that this semiotically lazy confusion of time and history is a quality of Ball as director, and not of his film’s barely glimpsed preschool-age protagonists.

Skinamarink, a crowdfunded passion project for writer-director-editor-YouTuber Ball, is a proudly experimental film in the sense that it is brutally formless and repetitive and masks these qualities with a veneer of faux-ethereal vagueness. Ostensibly the chronicle of two young children trapped with their single father in a demonically possessed domicile—their mother could be divorced or dead; sparse visuals and dialogue toss noncommittal hints in either direction, but studiously avoid making anything clear—it quickly reveals itself less as a narrative film than an excuse to immerse audiences in a series of “aesthetic” YouTube videos at exhausting length. The majority of the picture, shrouded in murky blue-tinted darkness, weaves inconsistently between a found-footage documentarian style and impressionistic first-person, consisting of static, out-of-focus shots of walls, floors, corners, hallways, ceilings, beds, closets, light fixtures, toys, and TV sets, accompanied by either disembodied thumping noises or whispered, quasi-coherent, and grammatically incorrect dialogue (often subtitled, for the real Ghost Hunters documentary effect) from its child stars Lucas Paul and Dali Rose Tetrault. Sometimes objects we’ve never looked at before—doors, windows, toilets—are shown magically disappearing from one frame to the next. Did something just move? we’re invited to wonder as we stare into the lo-fi blackness, and usually the answer is no.

The film’s intentionally amateurish visuals are deployed on audiences with the precision of a jackhammer, all in the interest of obscurantism. Ball conscientiously refuses to place any object or actor clearly in frame, opting instead for diced-up fragments glimpsed around the periphery of empty shots, carefully framed to suggest having been caught by accident. To permit clear images would be to allow the audience to identify, or identify with anything happening on the screen, and this would contradict the film’s one-note mission of unending disorientation. There is one exception to this rule: a CRT television is seen or heard playing quite clearly in most scenes, always running public domain Max and Dave Fleischer cartoons—the typical media diet of a ‘90s kid, of course—which is apparently supposed to induce deep instinctive dread. Because the cartoons are… old, I guess, and sometimes playfully morbid, as cartoons are. No elaboration is offered, nor any clear appreciation for the Fleischers’ ingenious artistry; their work is just a blunt, alien symbol to be ironically deployed as stand-in for atmosphere, the generic specter of cultural forms past.

Every so often the film goes in for a money shot. Suddenly the camera stands up straight, the background noises cut out, and objects in the darkness really do start to move, almost always precipitating a jump scare of the hackiest variety: screams, spooky faces, spattering blood, voice-filtered whispers, you name it. These are both the most conventional and most viscerally effective scenes, yet they never have much lasting consequence in Skinamarink’s world. Moments after every scare we’re back to staring at TVs, walls, and LEGOs for another 20 or so minutes, rinse and repeat, until the running time is up—presumably once Ball, who bravely takes credit as his film’s sole editor, has run out of footage. Or maybe there’s a four-hour cut hiding under the bed.

Formally it’s a big swing, and many will defend the film on account of its audacity alone. Ball, pursuing the reasonably interesting theme of perverted nostalgia and memory, is seduced by two artistic muses here, one of them a great deal more promising than the other: first that impressionistically capturing a four-year-old child’s partially formed consciousness, with its distorted sense of time, space, mortality, object permanence, and so on, can induce a uniquely horrifying mental space in adults; second, as in his whipping of the poor, uncredited Fleischers or fetishistic framing of cassette tapes and Polaroids as sinister objects, that pre-digital media is intrinsically scary.

The ridiculousness of the latter helps reveal the hollowness of the former. Skinamarink’s total refusal to grant the audience their bearings through spatial or narrative identification might seem to pay off in the early minutes, but as the film reveals its hand––in the lack of discernible motive behind any shot or cut, in the relentless repetition of interchangeable scenes and images without escalation or direction, and in the revelations of what precisely Ball considers scary––it quickly settles into monotony. If fake film scratches and Betty Boop don’t read as latent signifiers of terror to you, the film’s “moody,” “tonal” passages become condescending exercises in emptiness, only drawing attention back to its (lack of) narrative. Since it’s so actively difficult to grasp what’s happening, where and to whom, it’s likewise difficult to care when some undefined spooky thing occurs––not least of all because Ball’s imagery seems to derive less from any symbolic or narrative purpose than a grab bag of genre cliches popular with the YouTube horror subculture Ball has emerged from and appeals to.

Skinamarink is the latest film to try transmuting the fetishes of a very particular, horror-adjacent online subculture to the silver screen. Key touchstones in this case are “analog horror” and “creepypasta”: memetically user-generated stories, videos, audio, etc. describing users’ allegedly spooky and supernatural encounters, often involving the manipulation of old, “nostalgic” media. Sometimes the narratives will be intentionally cryptic and incomplete, facilitating another level of community involvement when obsessive fans and discussion groups seek to decode the “lore” and produce “explainer” content revealing the hidden truth to noobs, thus further deepening the mythology and ensuring sustained user engagement from all involved until the next round of Content drops. (You might be familiar with some of the goofier offshoots of this content genre, such as the crowdsourced mythology of the non-existent Martin Scorsese film Goncharov or the retroactive creation of Graggle Simpson.) It’s a certified hit with young audiences weaned from their earliest conscious years on Web 2.0, representing a latent distrust of their digitally mediated individual and cultural memories, a conflicting nostalgia for and terror of a pre-YouTube world they themselves never experienced, and often a place to indulge their sense of collective infantilization by a culture that bombards them with alternating messages of danger and affirmation at deafening volumes. It also clearly informs every aspect of Ball’s work, himself having jumped into feature filmmaking directly from niche YouTube content. Skinamarink is largely adapted and reimagined from Ball’s 2020 short film Heck, right down to its minutest aesthetic choices, from the repeated close-ups of toys framed by monitor light to the insistent Fleischer fetish to what little plot is present; what already wore thin at 20 minutes does so that much harder at five times the length.

In trying to synthesize YouTube influences into a narrative film, Skinamarink calls to mind another recent North American indie horror sensation, Jane Schoenbrun’s We’re All Going to the World’s Fair. The two films from young, first-time directors both draw heavily from online horror culture and share certain, let’s say, polarizing characteristics––a narrative vagueness that the filmmakers mistake for crafty minimalism, and a tendency toward blank repetition and monotony that they mistake for mood-setting. But Schoenbrun’s film finds its anchor in an exceptional lead performance by young star Anna Cobb, whose arrhythmic body language and hollow, sagging eyes give haunting, humanizing plausibility to the story of a disturbed teenager lost in the socially antisocial fringes of the internet. Ball’s ostensibly pre-internet film, by design, has “characters” but no human faces, being so focused on sensation over psychology that its mode of audience address is almost video-game-like––and more Five Nights at Freddy’s than Silent Hill. It’s not about young people infantilized by media so much as it’s for them, to be “vibed with” and consumed without reflection.