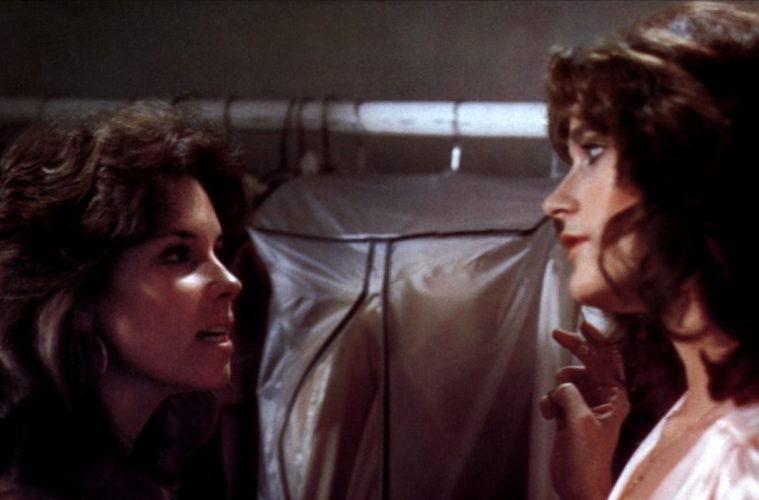 Brian De Palma‘s shocking exploitation gut-punch, Sisters, is a perfectly orchestrated exercise in style, a staging of some of the finest suspense sequences since Alfred Hitchcock was above ground. Channeling the Master of Suspense’s gleeful enjoyment of audience manipulation, De Palma remarkably employs a trashy genre aesthetic to satirically explore issues of race and social alienation. It’s a film about outsiders — a starkly disturbing reminder that looks and appearances can be dangerously deceiving — that’s nevertheless less interested in soap-box statements than inducing audiences to squeal and squirm. Grim in its contemporary relevance, De Palma and co-writer Louisa Rose‘s political satire is ever-present but far from overt, quietly bubbling in the background. This is a film in which police officers respond to learning of the stabbing of an African-American man by hatefully grumbling, “Those people are always stabbing each other.”

The film’s opening scene launches audiences head-first into voyeurism: a hole in a dilapidated dressing-room wall allows a man to spy on a blind woman as she casually undresses. Instead of peeping, the chivalrous man averts his eyes and turns his head. At this point, another layer is peeled back to reveal this scene as a clip on Peeping Toms, a voyeur-themed TV game show. The woman, not really blind, is an model and actress named Danielle (Margot Kidder) who later receives a new set of cutlery as her prize. The chivalrous man, Philip (Lisle Wilson), an African-American ad executive, receives his prize as well: dinner for two at New York City’s African Room.

Stunned by this careless racism, Philip merely shakes his head, chuckling to himself as Danielle appears, inviting herself along to dinner. Soon, Philip learns that Danielle has a jealous twin sister, Dominique, who does not care for her sibling’s male suitors. Philip is stabbed and the murder is witnessed through a window by Grace (Jennifer Salt), a journalist who lives in the building across the street. Jumping into action, Grace alerts the police, who arrive rolling their eyes at her wild claims.

Sisters was released only three years after Hi, Mom!, a film widely known for a sequence in which Caucasian people are forced to experience the world through the eyes of African-Americans, and what initially appears to be mere sardonic window dressing is quickly revealed to be canny narrative set-up. Why wouldn’t the police investigate this alleged stabbing? It’s amazing to find a film that contains a moment like Grace lamenting, “A white woman kills a black man and the racist police won’t even investigate,” and still feel its political themes are subtly employed.

De Palma also injects into this film one of his own personal obsessions: voyeurism, a subject he would continue exploring in the subtext of his later works. However, in Sisters, voyeurism is not really subtext. As an audience, we are watching someone who, in turn, is either watching or being watched by someone else. De Palma’s compositions, assisted by cinematographer Gregory Sandor, leave audiences implicit in the film’s crimes. It’s no coincidence that we meet our heroine on the aptly titled game show, Peeping Toms. As Roger Ebert said of Michael Powell’s genre classic, Peeping Tom: “The movies make us into voyeurs. We sit in the dark, watching other people’s lives. It is the bargain the cinema strikes with us, although most films are too well-behaved to mention it.” In this sense, De Palma’s films are some of the most playfully misbehaved within Hollywood’s annals.

The casting of Kidder, as well as Jennifer Salt (Play It Again, Sam) as this no-nonsense news reporter, deserves high praise. The soft, girlish Danielle and the hard, unfashionable Grace brilliantly play off one another, each offensive to the other in both taste and manner. There’s an endearing vein of Nancy Drew-like virtue in Grace, who runs around like a precocious teenager so full of confidence and enthusiasm that she stumbles over her own clues. She even accidentally destroys an incriminating piece of evidence right in front of the police, her noble intentions lost on detectives just as sexist as they are racist. Note the detective’s puppy-dog grin as he ogles Danielle before disdainfully rolling his eyes at Grace. Meanwhile, Danielle saucily purrs at Grace, reveling in the success of her deception. (“You see, I am a model.”) In almost mocking her accuser, we see that Danielle and Grace are like flip sides of the same coin. One stays out late while the other sits alone with a typewriter, nagged by her mother to find a decent man.

At this stage of his career, De Palma was still in the process of finding his voice and amassing numerous aesthetic fetishes. Missing is the Carrie-esque jump-scare ending employed in so many of the director’s more widely known films. Though Dionysus in ’69 marked De Palma’s first use of split-screen, his employment of the technique in Sisters was the true birth of what would become a trademark. The masterfully orchestrated split-screen sequence, in which a man fights for his life as he’s watched from a helpless distance, is delivered with skillful craftsmanship, yet lacks the polished nuance he’d achieve with Blow Out‘s Vilmos Zsigmond and Dressed to Kill‘s Ralf D. Bode.

Admittedly, Sandor’s cinematography may feel primitive when contrasted with De Palma’s later works; the same could be said of the film’s narrative. It’s exciting to witness what might be seen as a warm-up for masterpieces such as Blow Out and Dressed to Kill. Sisters is densely plotted and aggressively twisted, yet, when compared to the spiraling complexities of Femme Fatale or Raising Cain, its plot feels downright simple. Yet, at one point, a detective shouts in frustration, “There’s nothing simple about any of this.”

We visit psychiatric hospitals and see old medical films about conjoined twins while slowly creeping toward a grisly climax. Even the stunning opening-credit sequence will easily unsettle audiences with its micro-photography of human fetuses framed like alien creatures as Bernard Herrmann‘s chilling score screeches on the soundtrack. Thankfully, De Palma’s cold precision and wry satiric tone save the morbid subject matter from devolving into sheer sensationalism. It’s a fine line to walk, including some alarming close-up shots in a sequence that evokes Tod Browning’s classic, Freaks. The exploitation aesthetic never once spills over into genuine exploitation, despite the fact that De Palma’s film is unquestionably neck-and-neck with David Cronenberg’s Dead Ringers as the most disturbing cinematic tales of twins.