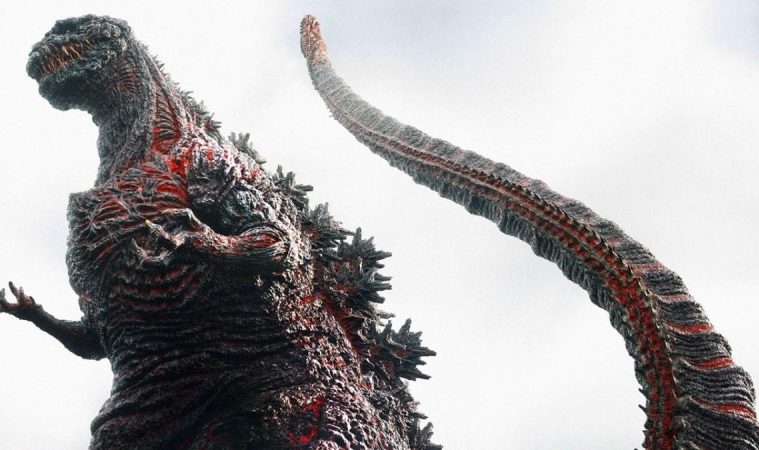 Often forgotten in the six decades since the release of the original Godzilla (1954) and its 1956 American recut is the somber, even funerary tone which pervades those scenes not showcasing its titular monster. Released not even a full decade after the atomic bombings of Hiroshima and Nagasaki which concluded World War II, the film was stunningly blunt with its nuclear metaphor in ways that penetrated the veil of genre pulp: scenes of radiation victims and refugee shelters overcrowded with legions of the dead and dying still have the power to rattle contemporary audiences, never mind those for whom the real thing exists in living memory. Certain scenes likewise exude melancholy beauty that belies the film’s reputation as monster-movie camp: a mournful schoolchildren’s choir undercuts a montage of urban ruins and a major character’s fateful decision; Godzilla’s ultimate defeat is more elegiac than triumphant, as the beast gracefully disintegrates in a geyser of bubbles while the heroes look on in stony-faced silence.

Now, in the wake of 2011’s devastating tsunami disaster and the growing specter of Chinese aggression, Japanese pop auteur Hideaki Anno lends his vision to a new (“Shin“) Godzilla for a new generation. Serving as director, writer and editor, Anno draws from both the legacy of the original film and his own prior work as a pioneering creative force in Japanese anime to create a dense and monstrous disaster film, but one with a tone of guarded (if not unconditional) optimism.

In lieu of the original film’s gradual buildup, Anno’s production gets right down to business, in an introductory whirlwind of cuts showcasing every conceivable vantage point, from expansive helicopter shots to grainy handheld Youtube footage: a destructive offshore anomaly produces a lumbering reptilian behemoth that finds its way into Tokyo’s urban infrastructure, with catastrophic results. The beast, evolving continuously into bigger, stranger, grotesque forms over the course of the film, is rendered with CGI effects likely to be underwhelming to an audience used to Hollywood-sized budgets, yet the inspired art design — a contribution from several of Anno’s anime-veteran colleagues — goes a great way to restoring the fleshy, luminescent creature to a place of menace and majesty. Where the original film cast Godzilla itself as a kind of tragic avenger, the monster here is barely personified except as an inconceivably destructive force of nature. (A brief, bizarre dialogue thick with meta-commentary notes the presence of “God” in the anglicized name of “Godzilla,” as opposed to the more phonetically accurate “Gojira,” alluding to a real-world debate that has raged among Eastern and Western nerds for generations.)

Counterbalancing Godzilla’s ongoing rampage is an equally frenzied progression of scenes set in sterile, detached government offices and boardrooms. Here a growing assemblage of politicians, scientists, diplomats and more from Japan and its global allies exchange frantic, jargon-heavy dialogue as they scramble to save both the city and their careers from the wrath of Godzilla. In lieu of the original film’s choice to supplement the monster plot with a narrative of familial melodrama, Shin Godzilla frames the story in its entirety as a duel between an unfathomable force of nature and the nation of Japan itself, embodied by personnel from its seat of government (and locus of Godzilla’s rampage) in Tokyo.

Concordant with Anno’s inimitable personal style developed over a 35-year career, the film employs a vast density of visual and textual information with a rapid-fire editing style, falling in rhythm somewhere between the banging of a gavel and the sweeping movements of a rock ballad. A painterly eye for shot composition and imaginative camera angles creates dense, expressive images, equally striking in sprawling deep-focus vistas of urban chaos and close interior shots of actors placed in-frame with the ornate precision of chess pieces. Balancing this finely tuned sensibility for still images is a rhythmic intuition for editing and sound: Anno (who edits his own films) cuts between time, space, and even lines of dialogue with down-to-the-millisecond precision, so hyper-conscious of each scene and shot’s immediate relationship with the ones before and after that the entire film could not unreasonably be characterized as a feature-length montage. For the punchy decisiveness and pinpoint rhythm of his editing style, Anno’s nearest analog in Western popular cinema could only be David Fincher — a man whose own background is not in conventional narrative film, but in music videos.

Working in tandem, these authorial techniques convey massive amounts of narratively pertinent information to the audience in very short periods of time; what other films might establish over the course of minutes, Shin Godzilla seeks to convey in seconds. Trying to absorb the sheer volume of words and images the film levels at the viewer on a per-second basis may be an exhausting sensory experience for non-Japanese audiences forced to experience the film through subtitles, not least of all during the frequent shots in which dialogue and onscreen text are displayed (and subtitled) simultaneously. Multiple viewings are likely in order for those who wish to suss out every visual and textual nuance. Thankfully the basic narrative thrust is already well known to the audience, and rarely too far from the surface to follow at least in its broadest sense: the film in its essence is about two conflicting bodies, and we need only spend so long observing their molecules to see the hands in motion.

Visually and thematically, Anno has long been fascinated by machines and military hardware, and now at last he has the opportunity to depict with full clarity his vision of government as a grandiose living machine — an assemblage of human cogs and gears as meticulous in form and function as any of the tanks, helicopters and airplanes that populate the bombastic action sequences, and just as seemingly impotent against the otherworldly might of Godzilla. While a few specific characters (Hiroki Hasegawa, Yutaka Takenouchi, and Satomi Ishihara all receive main billing) provide primary grounding for the ongoing whirlwind of diplomacy and military action, the narrative is constantly expanding to include more and more people in its ever-growing network of interests and activities: right up to the final minutes of the film, title cards in bold font introduce us to politicians, scientists, soldiers, and even machines with a critical part to play in the unfolding sequence of events. Recurring characters are given just enough dialogue and character-establishing moments to evoke multidimensional personalities behind their professional facade, and no more; in just a few short scenes, characters who initially come across as buffoonish, craven or calculating reveal hidden reserves of dignity and compassion in the face of catastrophe, without ever quite being one-note caricatures. While Anno’s ability to write any amount of humanity and complexity into such broadly sketched characters is surprising and laudable, the lack of individual human anchor points in the narrative does produce a chilling effect, isolated from both the original film and Anno’s own previous, immensely character-focused prior work.

Though some of the early scenes suggest the mock-documentarian approach of Matt Reeves’ Godzilla-cum-Blair Witch Project blockbuster Cloverfield, later sequences of destruction boast more mannered choreography — striking fusions of grandiose visual scope, surgical action cuts, and the electrifying yet unnerving dance macabre of mass destruction. In these epic clashes between biological and technological monstrosities on an urban battlefield, spectated by frantic boardrooms of scheming soldiers and scientists, Shin Godzilla is most reminiscent of Anno’s own seminal giant robot saga, Neon Genesis Evangelion. (Shin Godzilla‘s soundtrack, by Anno’s longtime collaborator Shiro Sagisu, even reuses key musical motifs from both Evangelion and the original Godzilla.)

Shin Godzilla is now streaming and available on Blu-ray/DVD.