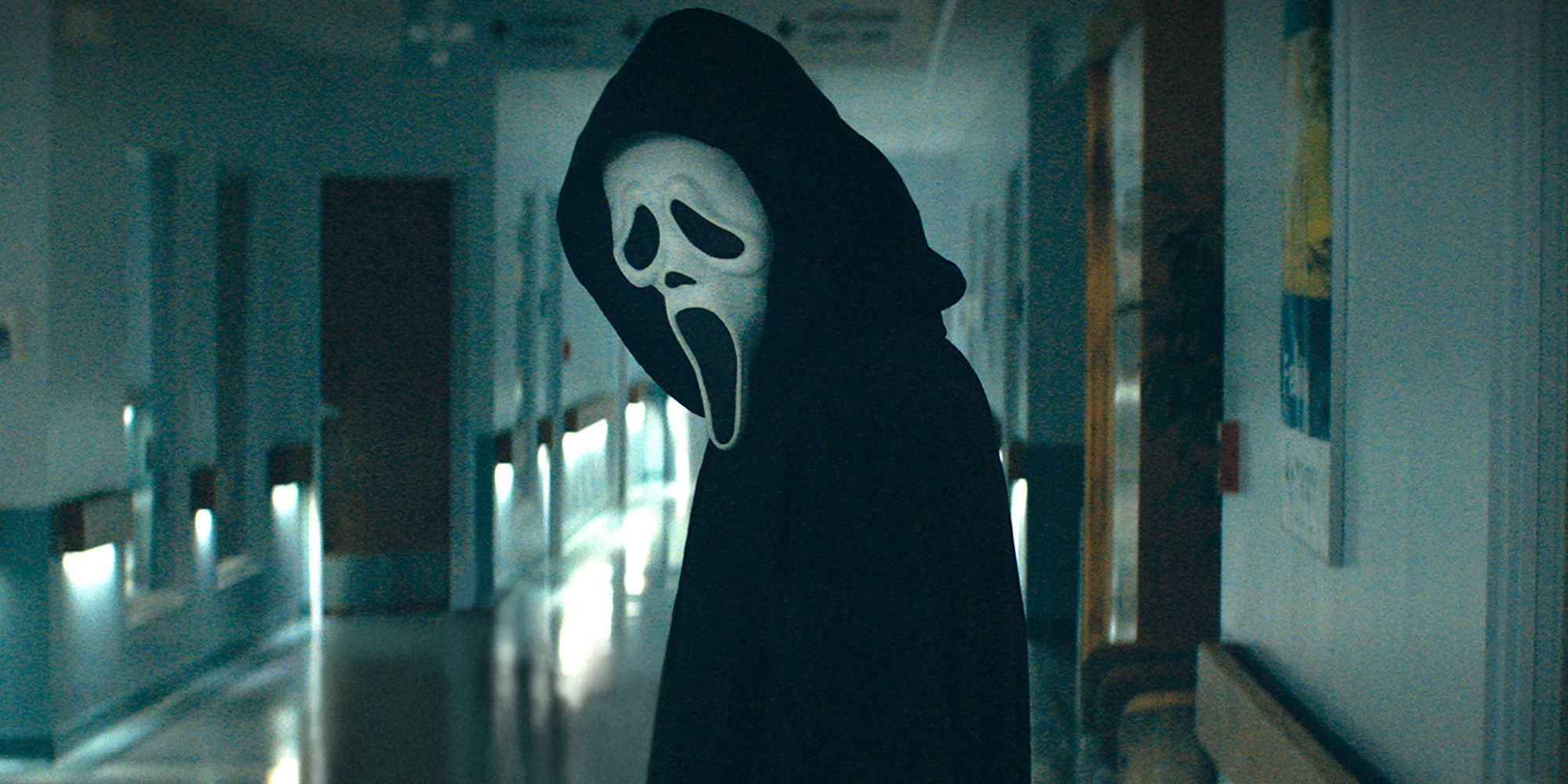 There’s something dispiriting about the latest Scream. It’s an uncanny sort, though, the kind that makes its outcome even harder to swallow. The film’s shortcomings come short of producing an abject failure. The attempts at taking risks, as misguided as the execution itself can be, confound as much as they disappoint. Of course, a change in course for one of the best—if not the best—horror franchises is to be expected. Scream 4 underperformed at the box office in 2011. Hopes for a new trilogy quickly drained over the course of months after its release, and Wes Craven, who shepherded the series until that point, died in 2015. Genre cinema had lost one of its most prolific artists.

Then, in 2019, a new installment was announced. Development picked up and Matt Bettinelli-Olpin & Tyler Gillett, fresh off Ready or Not, signed on as directors. It’s a legacy sequel, sort of like 4 is. It’s a reboot, focusing more on a new cast of characters with the familiar faces decidedly on the peripheries. It is, as the movie reminds us time and time again, a “requel”—sort of a reboot, also kind of a sequel. And yet, for all the meta dialogue as associated with these films, this one—simply called Scream—is a more earnest love letter to what’s come before.

But does admiration for something mean success? As shown here, no. Truthfully, this latest outing is something of a nadir for the saga, no doubt hurt by the consistency—and, at points, unsung brilliance—of its predecessors. Again, a creative departure is understandable here. It’s what the movie is about, what it’s doing. However, doing so doesn’t excuse a lack of patience. Scream doesn’t absolve itself of its technical and creative shortcomings, and its alacrity sure doesn’t excuse its lack of focus. Yes, Scream takes some risks, some of which are truly daring. It’s head-spinning, then, that it could still come off as so unceremonious throughout.

If anything, the very decision to divert attention from the original cast is a dare of sorts. Here, the eye is on Sam (Melissa Barrera), a 20-something runaway with a sordid past who, in the film’s crassest attempt at character work, has resorted to popping antipsychotics. When a new Ghostface attacks her younger sister, Tara (Jenna Ortega), she heads back from Modesto to Woodsboro with her genre-naive boyfriend, Richie (Jack Quaid). Given such, we get a swath of suspects and knife fodder in the form of Tara’s friends. With the script’s infatuation with extrapolating the mythos, many are connected to the past.

Mindy (Jasmin Savoy Brown) and Chad (Mason Gooding) are siblings and the respective niece and nephew of the late Randy Meeks (Jamie Kennedy). Wes (Dylan Minnette)—get it, everyone?—is the son of Judy Hicks (Marley Shelton), who’s gone from deputy to sheriff since 4. Then there’s Amber (Mikey Madison), a thinly sketched sarcasm dispenser. Last and least in terms of writing priority is another girl named Liv (Sonia Ammar). She hooked up last summer with an older dude named Vince (Kyle Gallner) who keeps swimming around the peripheries, a non-character trait for her that becomes a non-character trait in and of itself.

They are, for all intents and purposes, the focus here. The problem is that, even as basic as they are, they’re too much for Scream to handle. The pacing maroons everyone from each other just as it does them from us. Never is there a chance to sit with these characters and hang out with them. Stretching the lore over the ghosts of its past is the only thing in sight, and the script from James Vanderbilt & Guy Busick never grants audiences the most menial pathos, much less develops them. It’s a plot-driven structure in a character-driven story, and doesn’t understand how fundamental structure itself is to self-awareness.

As such, Scream misunderstands Scream. The filmmakers seem unaware that previous entries worked due to characters’ experiences organically defining them. If they didn’t do that, they worked because the archetypes were specific enough to create a trusted shorthand between artist and audience, enlivening both the given satire and parody in the process. The supporting roles are largely bland enough, but with someone like Sam, it’s a case of never being able to live with or see her process her history. She’s born out of an assault of expository dialogue, and Barrera, fundamentally miscast, reads as bored stiff unless there’s an action scene.

Inverse issues come to a head with the original trio despite the potential at hand. Early on, Sam and Richie approach Dewey Riley (David Arquette) for help. Now he’s retired, a recluse, and an alcoholic. Gale Weathers (Courteney Cox) has now moved away and is a morning talk show host. As the series has done over iterations, Scream again mirrors Arquette and Cox’s real-life relationship, and with that, the two are now divorced. Sidney Prescott (Neve Campbell), meanwhile, has also moved and is now a mother. Alas, it’s a facet of hers the movie has no time to attend to. Any reference to her family plays like a missed opportunity.

As the old reintegrates itself into the new over the course of the film, Bettinelli-Olpin & Gillett treat each sequence as a layer to hastily strip off. For a formidable chunk of the nearly two-hour runtime, the pacing neglects the entire supporting cast as if to provoke viewers into forgetting they even exist. The filmmakers treat it like a tradeoff: either abandon them and sideline the whodunit mystery entirely or, when they’re together, force everyone onscreen to constantly accuse each other of being the killer. It’s not just awkward. It’s so lopsided as to, for the first time, allow the viewer enough time to gather who’s behind the mask.

But for the chances Scream does take, it’s a pity the craftsmanship fails the endeavor. Whereas Craven always crafted a sense of spatial and temporal awareness to accrue tension and immerse the audience, Bettinelli-Olpin & Gillett lack such artistry save for one comically protracted set piece. (Multiple locations feel empty throughout, as does Woodsboro as a whole.) Similarly, DP Brett Jutkiewicz lends such a flat visual style to the point that the picture looks cheap, not at all helped by an apparent lack of color correction throughout and some truly alarming visual effects. Editor Michel Aller, meanwhile, demonstrates such a lack of involvement at points so as to preclude dramatic and comedic timing.

It all seems pretty rich that, from the beginning to end, the movie talks a lot about toxic fandom. With requels, Mindy posits that fans of famous series take it too seriously: they’re entitled, possessive, and regressive. If they get something different, they go “buck-motherfucking-nuts.” But what if a fan sees a requel and doesn’t hate it? What if they see far more potential in what could have been done to reach its goals? Disliking something doesn’t signal ignorance. It doesn’t, as the movie insists, equate with a lack of engagement.

If anything, such reflects more on the art itself. At its worst, it signals a chip on its shoulder. A movie like Scream has its assets. Some of the dialogue is quick enough to amuse and elicit a chuckle here and there. A few callouts to previous entries are effective without pandering. Regarding the new cast, Brown finds the tone no one else can seem to put their finger on and Madison, when given enough time, has an off-kilter energy that signals something better for herself and the film.

But to critique something is not to disengage with it. To want filmmaking that immerses us in the culture these characters—and we—are living in is not to discredit an idea. That’s the Scream DNA. Most importantly, asking for something to give due diligence to the ways it alters this story is to ask for respect. It’s needing time to grapple with and process the hardest moments it gives us, not to just sit with a basic physiognomy. It’s not to demand it.

Scream is not a bad movie. It is, however, a case of mediocrity being the worst sin. For a franchise all about coping with a media landscape that begets disillusionment to produce something just like this, it especially hurts.