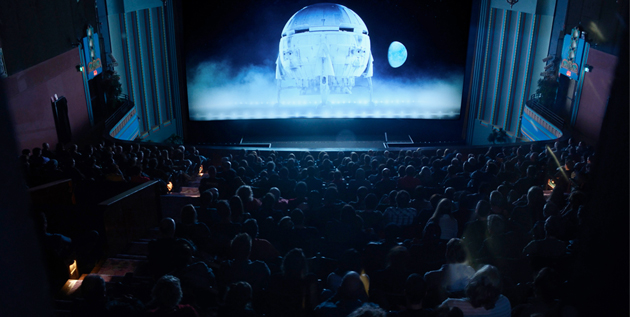 Say Goodbye to 35mm, Theaters Will Be Digital-Only by 2015: A Eulogy It was less than a few weeks ago that news broke (ever so softly) that the world’s leading film camera manufacturers, Arri, Panavision, and Aaton, have stopped production on all film cameras. While this news may not be surprising — what with the meteoric rise of digital moviemaking – it is disheartening nonetheless if only for romantics with allegiances to cinema as it once was. And so, it may seem only logical that 35mm projection in movie theaters worldwide is in decline. What’s shocking is that the extinction of 35mm projection could come as soon as 2015.

MSNBC (via Gizmodo) cites a report from IHS Screen Digest Cinema Intelligence Service that declares digital projection has been catching on in a big way over the past few years, and will surpass 35mm projection in popularity (as in the percentage of theaters using it) by 2012. Specifically the report states:

That niche could (and hopefully does) refer to specialty cinemas and art houses that offer unique revival screenings of classic or long-forgotten films, a viewing experience that I loathe to imagine disappearing for good. But before I expound on the glories of revival cinema, allow me to share the tipping point in this analog vs. digital battle. In a word: Avatar.

Yes. Before James Cameron’s wildly successful 3D extravaganza hit theaters, only 15% of theaters worldwide used digital projection. But after Avatar, the use of digital projection rose by 17 percentage points in 2010, and again in 2011, as opposed to its former growth of single-digit increases. Cameron has in fact proved so influential, that here in the United States, it’s expected 35mm will be nearly eliminated by 2013, with Europe following suit in 2014 and the rest of the world to fall into step by 2015.

Of course, this change in format will likely spur the digitization of many film reels, but there’s something to be said for seeing a film on the medium it was intended in the setting it was intended. That’s the wonder of revival cinema, which I fear will be the real loser in cinema’s latest evolution. Yes. Film as a medium has gone through many shifts throughout its existence, and each caused a stir. Charlie Chaplin initially resisted film’s move to sound, feeling his Little Tramp would be lost if given a voice. But then, he went onto make the daring and highly acclaimed talkie The Great Dictator. Many initially felt the move to color was garish, and only to be used for the spectacle of musicals. But soon this too became the norm. Acting styles have also changed as the art of cinema evolved, as has genre, technology and other aspects too numerous to mention. It’s of course part of what makes cinema so thrilling as an art form, this never-ending need to evolve and change. Yet, my heart still sinks at news that 35mm theaters will soon become even more rare. Personally, I’m lucky. I live in New York City, where there will long be audiences clamoring to even the most off the beaten path theaters to take in the movies of yesteryear. (To see what NYC has in store in this vein, refer often to Alt Screen.) I’ve seen so many movies here I know I wouldn’t have been able to appreciate fully on TV.

Not long ago I went with friends to see Fritz Lang’s iconic, silent masterpiece Metropolis in its most complete form since 1928 (when it was cut asunder by censoring governments and theater owners all over the world.) I’ve seen Lawrence of Arabia and 2001: A Space Odyssey in their expansive and awe-inspiring 70mm print glory. I’ve seen and screamed at Jaws (maybe my favorite movie of all time) in theaters three times. I revisited childhood favorites like Back to the Future and Indiana Jones and the Temple of Doom, and felt myself transported to these wild worlds along with a giddy and totally game audience. Each revival screening from Gone With the Wind to Rear Window offered the completely fulfilling experience of sharing the screening with a group of people as thrilled to be there as myself. Revival cinema pulls in the best audience you can imagine. People who sought this movie out; either because they love it so or because they want to know why so many do. It’s a place where jadedness falls away and a childlike anticipation overtakes you as take your seat in the dark theater and take in the buzzing anticipation as the whirr of the projector unfurls the opening credits. It’s true movie magic.

35mm is on its way out. And this is sad. But I take some solace knowing that long after it’s gone, there will be those of us who gather together in niche theaters, in remembrance and joy.

What do you think of 35mm’s impending end? Have you ever been to a revival screening? If so, share your favorite experience in comments.