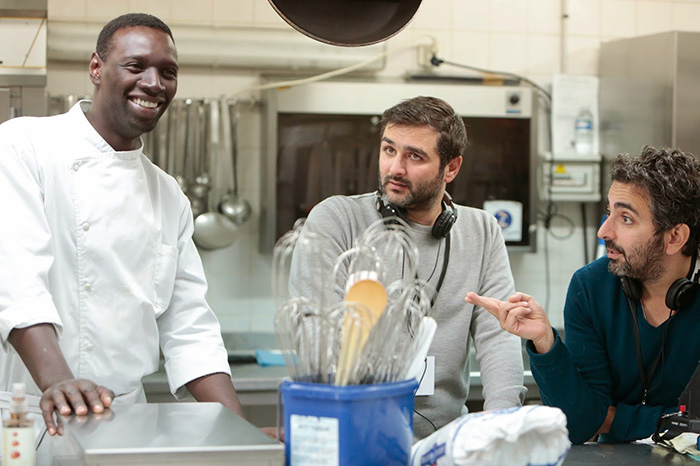 Olivier Nakache and Eric Toledano‘s (shown above at middle and right with Omar Sy) Intouchables was France’s record-breaking Oscar hopeful in 2012 and did make the January shortlist. An infectious crowd-pleaser based on a true story, it vaulted Sy into stardom with a César win over The Artist‘s Jean Dujardin and ultimately co-staring roles in Hollywood blockbusters X-Men: Days of Future Past and Jurassic World. It most likely also opened a floodgate of offers for the duo at the helm, but these Frenchmen aren’t interested in bringing someone else’s vision to life. They’ve written and directed their own collaborations for twenty years and don’t look to be stopping anytime soon.

Their follow-up—and fifth feature together—is Samba, an involving and humorous dramedy that made its debut at the 2014 Toronto International Film Festival. Finally ready to hit theaters stateside, we talked with Nakache about its development as an original story that ultimately brought in aspects from a novel by Delphine Coulin as well as his and Toledano’s penchant for getting collaborators to branch out and do things they haven’t yet done onscreen. And if for some reason you didn’t laugh enough at either Intouchables or Samba, he assures us we will with what’s coming next.

The Film Stage: I wanted to thank you and Eric for exposing me to the music of Ludovico Einaudi. I’ve been writing to his albums ever since seeing Intouchables in 2012.

How did your creative partnership with him begin?

When we write our scripts we work every time with music. And with Spotify: it proposes you that if you like Thomas Newman or if you like Michael Nyman, hear this man. You know? It’s a function of the application. One time, like this, we discover Ludovico Einaudi and we felt immediately that his notes are touching our hearts. He tells stories with his music. Each song has a beginning, middle, and an end. The music is very sweet and cinematic.

So when we wrote Intouchables we decided to call him. We said, “Hello, Ludovico. We are two directors and we wanted to meet you.” He says, “Oh, I don’t compose my music for films. No I’m not interested.” And we said, “We come tomorrow to Milan if you have just five minutes.” And he said, “Okay. Come on.”

We like pasta so we went to dinner and we showed him our three movies [Let’s Be Friends, Those Happy Days, and Tellement proches]. We told him about the story of Intouchables and he says, “Okay. I like you. Why not?”

We began like this, but you have to know that we took music that already existed and Einaudi than made arrangements of them for the film. [The same is done with Samba’s score.]

After the amazing adventure of Intouchables, he says, “Okay, guys. You can ask me for whatever you want.” So we decided to move on with him in Samba.

What was it that attracted you to Delphine Coulin’s novel Samba pour la France?

When we decide to plunge into a subject we do a lot of research because we want to nourish ourselves with sources. In New York City at the last French film festival we met her sister Muriel—Delphine and Muriel are directors too. They made a beautiful movie called 17 Girls.

We began to write a movie about an [immigrant] in Paris. We told this story to Delphine and she says, “Oh, amazing. You have to read my books because I was doing five years volunteering [at La Cimade, a refugee aid organization].” So we read the book and we immediately thought it was an incredible resource in terms of information. We then decided to use the novel as a starting point and basis for the movie. It’s a very dark and dramatic novel, so we added in Charlotte Gainsbourg‘s character Alice and changed another character into Wilson [Tahar Rahim].

This is now the fifth feature you’ve worked on with Eric. What is it like on set? Do you handle specific aspects individually or are you in tandem throughout production?

We met each other when we were kids in summer camp. We made three short movies and two hundred commercials so now there is an official [camaraderie] between us and it works. We split up the work, but both of us do everything. There is no, “This one has that job and that one has this job”.

We’ve got a Golden Rule: to try everything the other wants us to try. We let doubt insert itself and every morning we think, “What can we do to surprise the other one?” We are not brothers, but we became brothers.

Along with that collaboration, this is now Omar’s fourth film with the two of you. When did you meet him?

We met him in 2001 because we wrote a short movie [Ces jours heureux] and he was on TV [in Fred et Omar: Le Visiophon]. Not as a famous person—he played in a show exactly like Saturday Night Live. We caught a glimpse of him and decided to talk to him.

“We wrote a short movie. Can you read it?” He says, “I’m not an actor. I’m not an actor.” And we said, “We’re not directors so it’s perfect. Come with us.” The story began like this and a special thing happened between us. I don’t know what it is, but it’s a mix of friendship and respect and admiration.

Could you talk about his versatility as an actor going from the cocky confidence in Intouchables to an almost awkward shyness in Samba?

The character of Driss in Intouchables was very close to Omar in life. For Samba we wanted him to perform something, to create a character. We didn’t want him to dance and make jokes. We wanted to try something else. So for him it was a big challenge and it confirmed and validated for us that he is a great actor. Omar is like Novak Djokovic, but he has to have a Rafael Nadal or a Roger Federer or Andy Murray or Stanislas Wawrinka opposite him. His return is excellent.

Was he always your Samba? Did he agree to do the role as you were writing?

Yes. Right away. We also knew we’d have Charlotte Gainsbourg because we saw her before we started writing the script. And your third lead—Tahar Rahim—my knowing him from films like A Prophet and The Past makes his turn here an unforgettably hilarious contrast. How did his casting come about?

We knew him in life. Tah has an incredible intensity and is a great actor, but in life he is very, very, very, very funny. He can’t sit still. In the middle of writing we came to see him and said, “Do you want to just smile in a movie? Because we never see your teeth.” You know?

We created the character of Wilson for him and he had a lot of fun. It’s funny because he’s received a lot of [comedy offers] now in France. No one knew how comfortable he was doing comedy.

Were you on location for the entire film? The scenes where Omar and Tahar are running from the authorities on the rooftops for instance—were they actually on those roofs?

Yes. It was done the old-fashioned way without any tricks. We had taken security measures, but it was real.

Could you talk about what we can expect next from you and Eric?

We always want to talk about our society. We want to take all the various tensions in French society and we want to make a comedy out of them. We decided to make a film that would take place in one time period.

So we want to laugh again about our fear and the absurdity of this crazy climate. But we especially want people to really laugh so Eric and I decided we were really going to let go.