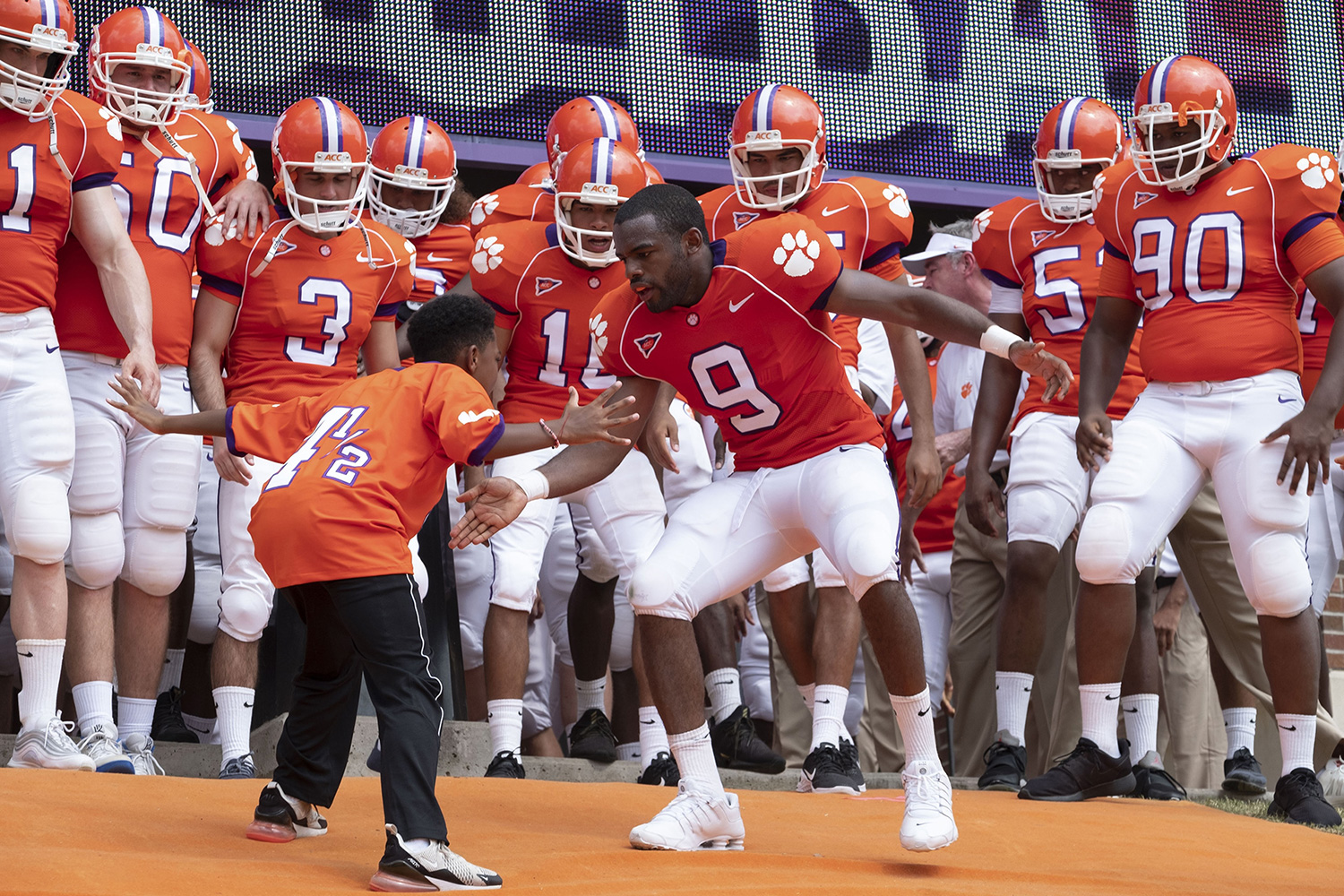 Anyone who’s played organized sports is familiar with their clichés. Whether “fighting in the trenches” as though a game is akin to war or loyalty and love transforming your teammates and coaches into a second family (the same rhetoric employers use as a means to get you to willingly sacrifice more than your compensation contractually demands), these platitudes are used to confirm that “we” is stronger than “I.” The result is two-fold: we do make priceless relationships from those experiences, but also sometimes find ourselves stripped of individual worth. So when a university like Clemson has a real-life story that can prove the former without a shadow of a doubt, you bet they’ll participate in bringing it to life … as long as the latter is edited out.

That’s the compromise you must make when tackling a subject such as the one at the center of Reginald Hudlin’s Safety. Verisimilitude carries a steep price tag in some instances and in cinematic terms that cost is often complexity. And Ray Ray McElrathbey’s (Jay Reeves) human interest story is nothing if not complex due to the details on-screen (he has to take custody of his younger brother as a Tigers football Freshman both on the sly and with ample community help while also working towards a psychology degree) and those off of it (the NCAA’s archaic rules that allow them to make millions off the talent of and sometimes devastating injuries suffered by the amateur players putting bodies on the line for a chance at a professional contract).

Exposing the second road isn’t something the NCAA or Clemson would ever allow, though. They’ll let screenwriters Nick Santora and Randy McKinnon touch on those frustrations in the abstract as a means for conflict, but only insofar as the end result shines them in heroic light. Because what should be a movie about one man’s perseverance despite the unscalable walls erected around him is instead rendered as one that positions the builders of those walls as benevolent entities quick to pretend they didn’t in order to receive positive pr explaining how they generously threw a rope down this one time. That hypocrisy isn’t something you can sweep under the rug. No matter how effective the subsequent revisionist history ends up, its absence will always speak louder.

I’m not saying these organizations didn’t play a huge role in helping Ray Ray and his brother Fahmarr (Thaddeus J. Mixson). They obviously did. Enough to worm their way into this story to ensure “I” becomes that “we” they love to use as indication of support and reward? Doubtful. The fact Ray Ray is forced to regress back to his “me vs. them” attitude throughout the film whenever someone says he’s already done more than most proves it. The fact he has to bat away the helping hands of coaches to stand tall and declare how he’ll keep fighting regardless of the outcome does too. They all care when they can. So had this story ended differently, they’d wish Ray Ray well, hit the field without him, and move on.

You can argue that this truth is mostly ignored because it’s an implicit fact all you want, but it isn’t for everyone—especially not the children family-friendly fare from Disney like this targets. To them the message here is that big money will always look out for its employees (because that’s what Ray Ray is to Clemson regardless of their verbiage). It shows that the real heroes like Ray Ray will be rewarded for their altruism when the opposite is actually truer. There are so many pieces that have to fall into place for what happens to happen that Safety is closer to a miracle than it is evidence of a system working. Here’s another cliché for you: a broken clock is right twice a day.

That this broken clock is correct here shouldn’t therefore be the focus. It should instead fall squarely on Ray Ray’s shoulders and on those he allows into his life to assist him during this arduous journey. That’s hard to do, though, when the script is constantly searching for ways to take away what makes him special. There are reasons for this (namely that he needs to realize he isn’t alone before allowing himself to be vulnerable), but surrounding him with white saviors (James Badge Dale’s Simmons and Miles Burris’ Keller) who “understand” because they also had it hard (albeit nowhere near as hard considering a brief scene early, devoid of context, that’s dripping with malice and unspoken horrors when Ray Ray returns home to Atlanta) is beyond patronizing.

As soon as you sanitize one aspect, the rest inevitably follows. If Ray Ray loses complexity, those around him have it stripped away too—including his girlfriend (Corinne Foxx’s Kaycee) and teammates willing to give their lives for him in large part because the script demands it. This is about huge grins against an invisible evil we’re all supposedly fighting together. And it’s precisely because this antagonist is a universally resonant “tough life” everyone has overcome to varying degrees within their own experiences that the emotional beats here prove so potent. Hudlin has this thing firing on all cylinders to be the tearjerker, against all odds crowd-pleaser Oprah fans love (the McElrathbey episode plays during the credits). It’s highly effective. Just don’t ignore that it’s also highly manipulated.

So enjoy the sporadic on-field football plays and the abundance of optimism this affluent community provides the poor Black boys from Georgia. Enjoy the complete lack of adversity inside the locker room besides a few “college hazing” moments that come and go with little drama before the bullies reveal themselves to be “great guys.” It’s easy to ignore the unbelievable nature of these details when the drama concerning whether or not Fahmarr will end up in a foster system that in turn will destroy Ray Ray with guilt is so in-your-face. You’ll even gloss over a scene where Ray Ray tells his brother it’s okay to leave his gym locker unlocked in South Carolina because he’s “safe now” without ever approaching the reductive treatise on assimilation it provides.

Safety will be streaming on Disney+ starting December 11.