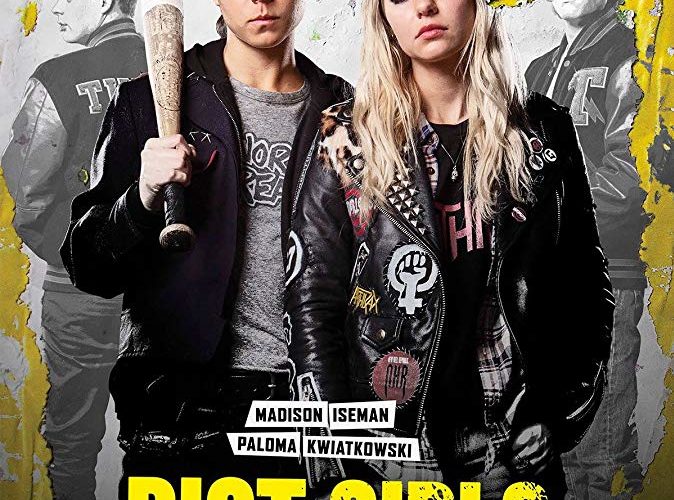 Following her success helming a segment in the well-received, woman-directed horror anthology XX, former Rue Morgue editor Jovanka Vuckovic delivers her feature film debut with the high concept, post-apocalyptic teen actioner Riot Girls. Obviously borrowing from the underground feminist punk movement Riot grrrl for its title (with an appropriate aesthetic and love for Joan Jett), screenwriter Katherine Collins’ tale of rival gangs also takes many cues from “The Walking Dead” by applying that 90s-era subculture to its social commentary separating humans into two categories: those who kill to survive and those who kill for power. In a world where adulthood spells death via an unexplained gut rot, teenagers are forced to take control. And if the microcosm of Potter’s Bluff is any indication, youthful exuberance divides on the poverty line. On one side of the bridge reside rich kids who’ve transformed their high school into a fortress run by varsity captain Jeremy (Munro Chambers) and those he deems worthy of his toxically masculine creed of taking what you want and living off the backs of prisoners who’ve broken his rules (think “The Walking Dead’s” Negan). On the other is a contingent of punk rock survivors who’ve learned to steal, protect the helpless, and create a community under the tutelage of Jack (Alexandre Bourgeois) by embracing anarchy, freedom, and altruism (think Rick Grimes and his ragtag heroes). As those living under Jeremy’s thumb in the West realize their lack of agency, some (Jenny Raven’s Caine for instance) take it upon themselves to upset the applecart in hopes of rebellion.

This is how Jack knows where to ambush supply runs and bring the spoils (water, batteries, medicine, etc.) to the East. When the latest excursion goes sideways, however, he gets captured and taken to Jeremy’s prison as a murderer who must be dealt with in-kind. It therefore falls to his sister Nat (Madison Iseman), her girlfriend Scratch (Paloma Kwiatkowski), and Jack’s most recent rescue from the clutches of danger, Sony (Ajay Friese), to save him. They’ll have to cross enemy lines, escape a Titan checkpoint (the school’s “mascot” and thus the name of Jeremy’s letter-jacket-clad soldiers), and sneak inside the high school to stage their retrieval. While teenage punks and jocks locking horns sounds cute on paper, Vuckovic isn’t messing around when it comes to their violent collisions. With knives, crossbows, baseball bats, and the odd gun at their disposal, these kids must steel themselves to the reality that survival isn’t a guarantee. Where Jeremy wants his generals to use force to earn respect from (sow fear into) their victims (something Darren Eisnor’s martial arts expert Todd craves and Evan Marsh’s conflicted warden Devon rejects), Jack leads with love and equality to actually have the respect of his friends and know they’ll come for him. Besides Jeremy and Todd, however, nobody is prepared for what they’ll have to do. Jack doesn’t want to hurt more people than he has to and just because Scratch can be cold-blooded when those she cares about are threatened doesn’t mean she’s comfortable in that role. Sometimes you’re simply left without a choice.

Give this world more time to expose its themes, dynamics, and history and you could really dive into the Lord of the Flies nature of kids thrust into responsibilities they aren’t quite mature enough to handle. As is, things can feel rushed and truncated with barely an eighty-minute runtime. Vuckovic actually reveals the perfect medium with which to expand upon what’s on-screen with her comic book style transitions between scenes. That’s not to say things are difficult to follow. The abbreviated prologue provides the setting and the overarching black and white form of good versus evil helps us hit the ground running. It’s merely tough to fully invest when much of what happens must be told rather than shown to save time. Motivation is often replaced by impulse. To a certain extent this fact aligns with the punk aesthetic because it keeps things lean and mean. One scene of reprimand where Devon sentences a young boy to “detention” and leaves a barely older girl to return home and relay the message being sent has wide-ranging ramifications that ultimately set the course for multiple other characters. The lack of wiggle room and nuance makes it difficult to specifically care about Fish (Nicolas Aqui) or Madge (Stefani Kimber) emotionally once “war” kicks off and their lack of consequence is cemented, but leaving them as pawns gives the others the screen time to desire our empathy instead. It’s therefore not rare for Collins and Vuckovic to kill characters solely to impact someone else more crucial to the bigger picture.

This penchant for dropping the hammer makes it so nothing ever seems as precious as its superficial punks versus jocks conceit too. That imagery is stylized and intentionally comical, but the mounting body count ensures no punches are pulled simply because of these kids’ ages. It also guarantees we witness the devastation endured by them becoming murderer and/or survivor—having blood on their hands and/or experiencing the sort of loss no teen should (yet so many continue to face in this post-Columbine America). We need more unrelenting work like this to use as catharsis for a youth put in peril by the inaction of aging politicians. Riot Girls proves just as much about a new generation taking the reins as it does empowered women expunging toxic male entitlement.