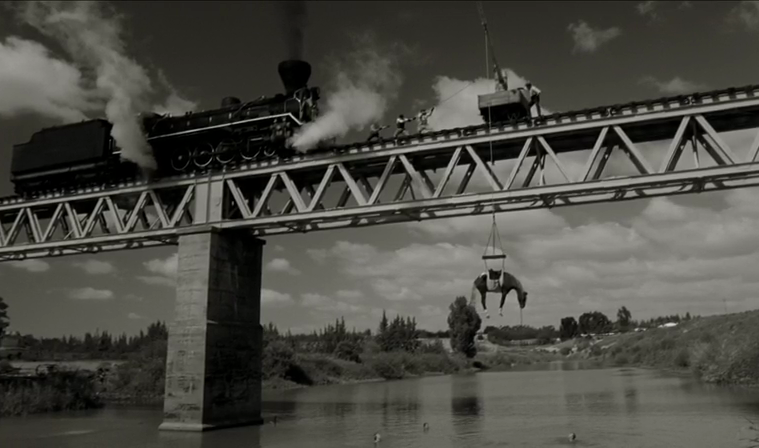 Watch Richard Ayoade stop by The Criterion Collection closet and discuss inspirations for his films:

Read Dennis Lim‘s essay on Manakamana, one of the best films of the year, for CinemaGuild:

The Manakamana Temple, situated on a mountain ridge in central Nepal about 65 miles west of Kathmandu, is the sacred place of the Hindu goddess Bhagwati. The name comes from mana, meaning heart, and kamana, meaning wish, and Bhagwati is believed to grant the wishes of worshippers, who typically bring offerings in the form of flowers, fruit, incense, saffron, rice, red cloth, or an animal sacrifice. The journey to the temple used to involve an arduous hike and could take up to three days. Since 1998, the most efficient means of transport has been by cable car, in a gleaming, Austrian-engineered gondola lift that glides above the Trisuli river valley, ascending or descending nearly 3500 feet in the span of about 10 minutes.

The Art of the Title explores the opening title sequence for Tarsem‘s The Fall:

The opening title sequence for Tarsem’s The Fall is the perfect example of a director’s absolute control over his vision. To view it after seeing the film is a gift; a rare and beautiful thing. Surreal, extravagant, and a world singularly Tarsem. What is it to sense things in such a way?

Scored to Beethoven’s Symphony No. 7 In A Major, Op. 92 (2-Allegretto), the visuals hit their money notes in quick succession. The bridge becomes a stage and the caballus curtain rises as the sequence concludes. It is a dream, and we are Dorothy, remembering the players.

If you do it right, film criticism is a lonely job. But some films make it lonelier than others. Films like “Boyhood.” For just about every other critic in America, “Boyhood” has been the opposite experience, a chance to join in an unprecedented chorus of shared exultation about a film written and directed over the course of a dozen years by Richard Linklater that used the same group of actors to watch as a boy named Mason grows from a child of 6 to a young man of 18.