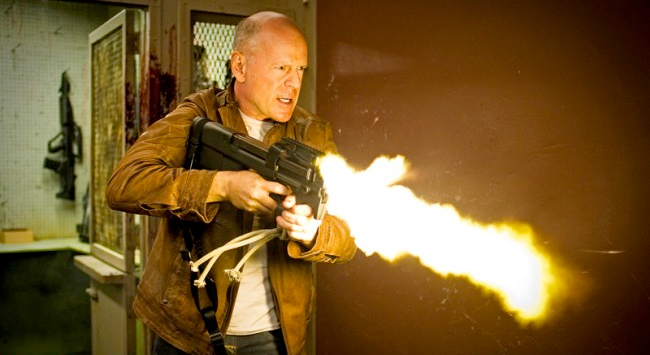 With their first feature Insidious being a massive hit, the newly formed FilmDistrict is currently on a pick-up frenzy during the chaotic Cannes Film Festival. Their upcoming thriller, Nicolas Winding Refn‘s Drive starring Ryan Gosling and Carey Mulligan, is playing in competition and they’ve decided to do some business on the trip to France. Deadline tells us they are in final negotiations to acquire U.S. distribution for Looper, the next film from Brick and The Brothers Bloom director Rian Johnson.

The plan is to team with Sony Pictures’ TriStar label for marketing and distribution. The time travel film stars Bruce Willis (as an older version of Joseph Gordon-Levitt‘s character), Emily Blunt, Paul Dano, Jeff Daniels and Piper Perabo. The high-concept story follows “hitmen whose victims are sent back in time from the future to be executed. The Loopers bump them off in the present, so there is no trace of a crime in the future.” Release is expected sometime in the first half of 2012.

In other FilmDistrict news, the distributor has picked up the next film from The Pursuit of Happyness and Seven Pounds director Gabriele Muccino, Playing the Field. Starring Gerard Butler, Uma Thurman, Judy Greer, Jessica Biel, Dennis Quaid and Catherine Zeta-Jones, the film follows a “former professional athlete with a weak past trying to redeem himself by coaching his son’s soccer team, only to find himself unable to resist when in scoring position with his players’ restless and gorgeous moms.”

They’ve also grabbed U.S. rights to The Mask and Scorpion King director Chuck Russell‘s next film, Arabian Nights. Starring Thor‘s brother Liam Hemsworth, the $60 million 3D fantasy film is a “retelling of the classic adventure tale about a bold, young commander who joins forces with Sinbad, Aladdin and his Genie to rescue Scheherazade and save her Kingdom from the dark powers of an immortal Sorcerer.” In other major distribution news, The Weinstein Company has acquired Meryl Streep‘s The Iron Lady. Expect a major late 2011 awards campaign in the vein of The King’s Speech for this Margaret Thatcher biopic. TWC won the bid for $7 million after five minutes of footage was screened at Cannes. From Mamma Mia! director Phyllida Lloyd, the film stars Harry Lloyd, Richard E. Grant and Jim Broadbent.

Related to Streep, we have news of another one of her films being picked up, this time by Sony Pictures. The studio has grabbed David Frankel’s comedy Great Hope Springs, which also stars Tommy Lee Jones as “one half of the troubled couple.” Steve Carell “plays the marriage therapist who tries to help rekindle their loveless relationship after 31 years of marriage. It’s their last shot before divorce.” Production doesn’t begin until August, so expect a 2012 release.

Lastly, we have a few minor pickups. Sony Pictures Classics has acquired Joseph Cedar’s in competition title Footnote. The next drama from the Beaufort director follows “a great rivalry between a father and his son, their need for each other and their need for respect and recognition in the world.” Although we’ve chosen to round out the post with the following news, it may be the most exciting of the bunch. IFC Films has acquired the next film from Summer Hours and Carlos director Olivier Assayas, Something In the Air. The semi-autobiographical film shoots in June and “follows an art school student in Paris in the early ‘70s navigating his personal politics and artistic ambitions.”

Which film are you most excited to see?