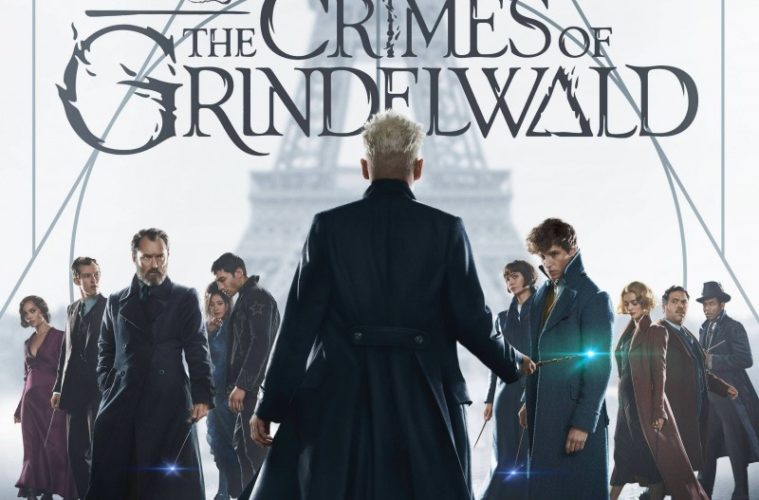 Anything that’s halfway interesting in Fantastic Beasts: The Crimes of Grindelwald, the dreadfully-named sequel to the first Harry Potter prequel-spinoff Fantastic Beasts and Where to Find Them, lies almost entirely in its ungainly subtext. Johnny Depp’s Grindelwald is a radical dark wizard who plans to amass a following of pureblood wizards to rule the non-magical realm so that they no longer have to live in secret. Screenwriter J.K. Rowling essentially codes him as a garden-variety fascist, the kind that hosts well-attended rallies featuring nationalist rhetoric disguised as common sense, predatory brainwashing, and misguided victimization, ideas that are so en vogue amongst conservative leaning types nowadays. Looking like an nü-metal holdover sporting steampunk-adjacent attire, Depp plays Grindelwald like a modern self-help guru, one that would gain popularity on the morally vacuous abyss they call YouTube. He’s gentle but firm to his would-be followers, playing off their insecurities, promising fulfilled desires vis-à-vis control and order, and it only requires just a little bit of totalitarianism and mass murder. There are some brave souls that see through his charade, but his followers are growing and it’s unclear if they can be stopped.

Have you sussed out the parallels to our Current Political Moment yet? The Trumpian analogy frequently plays out mainly in dialogue (there’s plenty of Resistance-friendly talk about “division” and “picking a side” befitting a time when fascism is just out of reach but no one knows how to properly combat it), with a side of bland authoritarian aesthetics in Philippe Rousselot’s photography (drab color scheme, low lighting, melodramatic close-ups etc.) If that’s not enough, the Grindelwald character also hints at a subtle commentary on Depp’s star power. Following ex-wife Amber Heard’s domestic violence allegations, Depp has become a toxic cultural figure at a time when Hollywood has publicly feigned reflection towards its various systemic abuses of power. In Fantastic Beasts 2: Accio-Boogaloo, Depp, through Grindelwald, trades on his seductive charms for evil ends, molding his playful theatricality into something more blatantly sinister. Is Depp consciously playing off the villainy the public has projected onto him after spending years as a serious, bankable movie star? Possibly not, but it’s at least something to ponder so as to pass the time through this dull, dumb, inconsequential film.

Unfortunately, any further probing of this subtext only further illustrates the incoherency of Fantastic Beasts’ politics. Grindelwald and his followers scan as right-wing jingoists desperate to reclaim the world for witches and wizards, but they’re also a minority class, vastly outranked by the majority non-magic (or “no-maj,” as Rowling insists on mouthful nonsensical terms) population and non-radical wizards. I suppose that Grindelwald and his followers’ collective dark magic balances out the number disparity, but does the Trumpian analogy maintain cultural currency if it doesn’t involve a majority class? At one point, Grindelwald informs his followers at a rally that the wizarding community would be better leaders than their non-magic counterparts, showing them predictions of World War II as evidence of what will happen if humans are left to their own devices. Maybe it’s foolish to take Grindelwald and his cohorts at their word, but if they are indeed capable of stopping, say, the Holocaust, shouldn’t that be considered a point in their favor, especially considering Rowling’s strict moral worldview?

I don’t know, but neither does Fantastic Beasts. Rowling merely wants to make fractured parallels to our current political and sociocultural predicaments to goose up a fundamentally inert story. Crimes of Grindelwald technically follows magizoologist Newt Scamander (Eddie Redmayne, almost pathologically devoid of charisma, even correcting for his character-appropriate nebbishy personality), Tina Goldstein (Katherine Waterston), a newly promoted Auror, and New York bakery owner Jacob Kowalski (Dan Fogler) as they search for the disturbed Credence Barebone (Ezra Miller) before Grindelwald can red pill him into submission, but Rowling’s slapdash, go-nowhere script cannot generate any tension from this chase. Instead, Rowling spoon-feeds backstory via teasers that only generate mystery through utter vagueness, introduces irrelevant new characters that are set up to be murdered, or simply moves chess pieces so that Our Heroes can be together again at last. Sometimes, the fantastic beasts appear, and while they’re only mildly fantastic, at least they’re on message.

But no amount of beasts, however fantastic they might be, could have saved this remarkably incompetent film. Rowling’s talents explicitly lie in characterization and world building—the Harry Potter series lived and died by its trio of compelling, well-defined characters—so, naturally, Fantastic Beasts features little of either. She either coasts on familiarity (wanton Hogwarts nostalgia recurs throughout) or mistakes “exposition” for personality, because people are only ever as interesting as their tragic origin stories. Her genuine awe for the wizarding world, something she communicated so effectively in her seven-book series, has been replaced by self-serious historical cosplay, as if to suggest that that wide-eyed wonder is too juvenile for such a fraught time. Anything remotely “new” in this film, e.g. the semi-foregrounded homoerotic subtext between Albus Dumbledore (Jude Law, easily the film’s best performance) and Grindelwald, feels painfully brief. There are all the standard big-budget studio film problems—visually muddled action sequences, a complete disregard for narrative pacing, frustratingly bland direction (something of a surprise, considering that director David Yates did solid work in the original series), and just piss-poor effects work—but thankfully Rowling adds ridiculous plot twists piled on top of each other in the last half hour to sweeten the pot. Spoiler alert: Apparently everyone is related.

I keep asking myself: Who is this film for? Even for those still dyed in the wool, can Fantastic Beasts, a film that generates boredom more readily than fun, really sate the desire for Harry Potter-esque adventures? There was a period in my life when I invested a lot of time and emotional energy into this franchise, and I still retain some affection for it, or at least memories of that affection. While no longer that person, I’m at least primed to return to that realm again and see the sights. It’s sad that Fantastic Beasts pulls off what I assumed was impossible: It turned an imaginative fantasy world into dreary wallpaper.

Fantastic Beasts: The Crimes of Grindelwald is now in wide release.