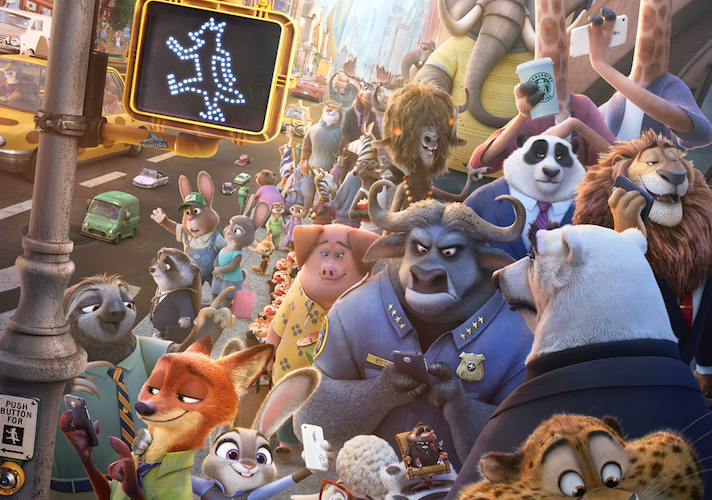 Fair play to Walt Disney Animation Studios of late for not always venturing down the most obvious, tried and true path. Peppered in between their recent revivals of their musical formula (Tangled, Frozen) and recognizable properties (Winnie the Pooh), there’s been a full-blown foray into video game culture (Wreck-It-Ralph) and a superhero adaptation heavy on meshing together Asian and American cultures (Big Hero 6). And now, with Zootopia (or Zootropolis, as some of Europe is getting it), we have a police procedural/neo-noir that actually interrogates themes of racial stereotyping and classism, while satirizing matters like the War on Drugs. But, you know, with bunnies and buffalos. Set in a world populated by anthropomorphic animals, where predator creatures live in harmony with those they would once have preyed upon, Zootopia follows Judy Hopps (charmingly voiced by Ginnifer Goodwin), who fights prejudice and pursues her dream of becoming the first rabbit to join the police force. A political initiative in the mammal metropolis of Zootopia, spearheaded by Mayor Lionheart (J.K. Simmons), a big lion, and Deputy Mayor Bellweather (Jenny Slate), a small sheep, sees her dream come true with assignment to the ZPD’s 1st Precinct after years of training. Unfortunately, she is immediately relegated by Police Chief Bogo (Idris Elba, in fun, sardonic form as a cape buffalo) to parking duty. While over-performing in that role to prove herself, she is manipulated and humiliated by a con artist fox, Nick Wilde (Jason Bateman, whose cinematic persona is given an enjoyable twist here).

Wilde later becomes an unwitting partner to Judy, who finds herself assigned to a missing person (missing animal?) case with a 48 hour deadline. Their entertaining journey to find one otter sees them cross paths with crime bosses, nearly savaged by suddenly vicious predators, and uncovering a massive conspiracy concerning the creation of a species-based fear of the city’s predator minority. Most terrifying of all, they have to visit a DMV, one entirely manned by slow-moving sloths in a hysterical, protracted sequence that’s naturally been mined for much of the film’s marketing.

With creative forces that includes co-directors from Tangled and Wreck-It-Ralph and notable figures from the likes of The Simpsons (Jim Reardon), Zootopia proves a successful amalgamation of disparate influences, much like its eponymous city: a vibrant collection of distinct microclimates like Little Rodentia and the icy Tundratown, all filled to the brim with details and sight gags you’ll probably only ever catch all of via an obsessive fan site. It’s a lot like another Disney project, Who Framed Roger Rabbit, in that way, though Zootopia offers enough inventive merit and different thematic material of its own to avoid coming across like a case of repeating old tricks.

Indeed, while both Who Framed Roger Rabbit and Zootopia mine film noir and crime fiction tropes to successful effect, the latter’s more prone to recalling specific film and television moments. The Godfather naturally gets a look in, but the film also has what’s perhaps the most surprising, overt reference to Breaking Bad you’re likely to encounter. In fact, the mode of explicit homage tends to be where Zootopia’s otherwise very successful comedic streak falters, and this mode includes riffing on Disney’s recent successes; your mileage may vary as to whether a Disney character in a film that isn’t Frozen acknowledging the existence of “Let It Go” is perhaps one meta joke too far.