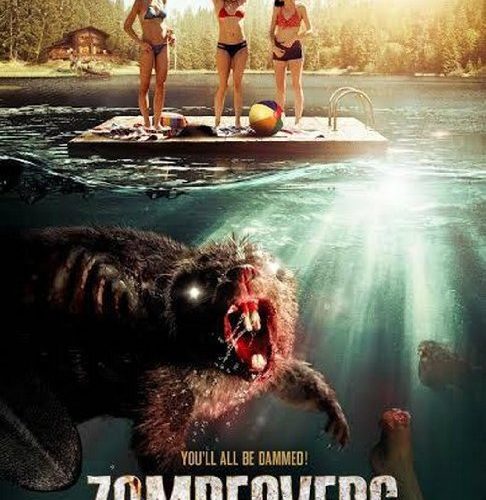 Right from the start of director Jordan Rubin‘s Zombeavers, the film scores points for originality. Its horror-comedy tone is familiar, but not until 2015, somehow, have we seen the potent mix of zombies and beavers, and Jordan Rubin and screenwriters Al and Jon Kaplan deliver on that wonderfully ludicrous premise.

What easily could have been a one-joke film is instead a lean, seriously funny 77 minute-long comedy that never runs the main gag into the ground. Zombeavers begins with promise, thanks to an appearance by a well-known musician and one of the best stand-up comics working today, Bill Burr, having a conversation that, really, could make for a great movie starring Burr. He plays a delivery guy discussing the one week he dated a guy, and the advantages that came with seeing a member of the same sex. The two morons are carrying a batch of chemicals, and when one of them is texting while driving, they run over a deer, causing one of the barrels to go into the lake, which ends up turning the beavers into wild zombies.

These pesky beavers end up ruining three girls’ vacation. After Jenn’s boyfriend (Lexi Atkins) cheats, her best friend, Mary (Rachel Melvin), suggests a trip to her cousin’s lake house. They also bring along Zoe (Cortney Palm), a character that gets better and better as the film progresses. Soon their trip is ruined by their boyfriends showing up, including Jenn’s ex, and the violent beavers.

And yes, there are plenty of jokes made about the girls’ “beavers,” all of which, shockingly, never get stale. The script is packed with quotable lines and there’s nothing lazy about Zombeavers‘ execution. The Friedberg and Seltzers of the world would’ve stopped putting in any effort after coming up with the title, but Al and Jon Kaplan go for every joke they can, not quitting after simply thinking of an amusing premise. It’s a ferociously clever script, filled with both obvious and not-so-obvious jokes. There’s one film reference, in particular, that we won’t spoil, but gets a huge laugh.

Zombeavers was clearly made on the cheap, but Rubin makes sure to have fun with the camerawork. There’s some visual references to other man vs. nature films — Joe Carnahan’s excellent picture, The Grey, for example — that work quite well. There’s a mundaneness to the lake setting which is oddly comical, as well. If there’s one visual gag that doesn’t always land, it’s the puppet work. A part of the joke is how fake the beavers are, and after a certain point, it loses steam. They certainly don’t need to look genuine, but after the umpteenth time they’re used as a sight gag, it’s not as amusing as the initial reveal.

Thankfully, the filmmakers were smart enough to make a concise film, so any problems, which there are very few of, never have time to linger. It could have overstayed its welcome, but thanks to a tight pace, a fun script, and good casting, consider Zombeavers an unexpected, pleasant surprise.

Zombeavers is now in limited release and available on VOD.