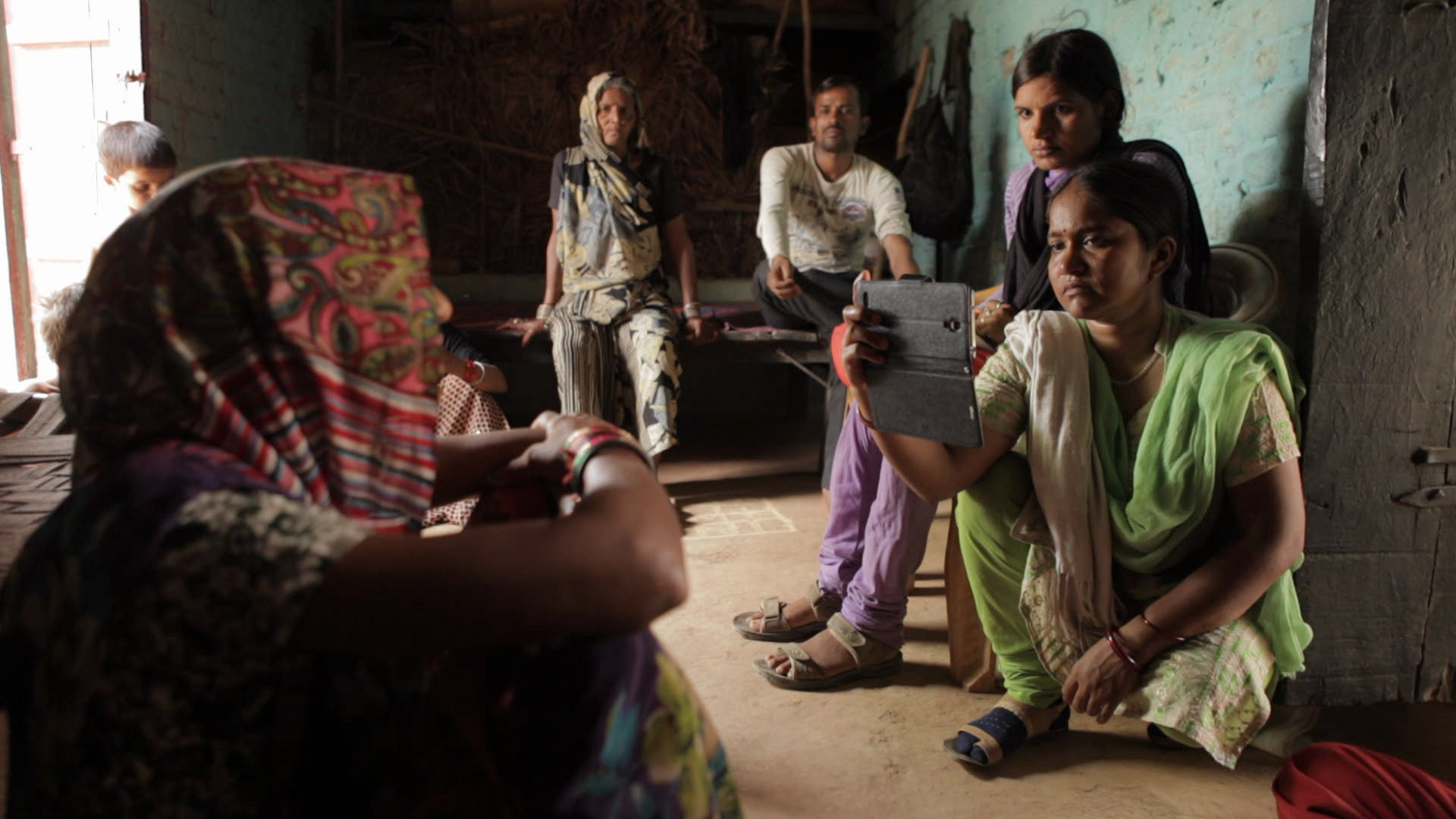 It’s sometimes easy to forget white supremacy is deeply rooted in religion, race being such a major component of its rise in America. Watching a film that depicts the growing Hindu nationalist movement in India, however, really shines a light on that piece of the puzzle considering how similar their tactics are to what’s been happening here at home. While Sushmit Ghosh and Rintu Thomas’ documentary Writing with Fire isn’t specifically about this development, one cannot easily separate it from their actual subject: a Dalit women-run newspaper in Uttar Pradesh called Khabar Lahariya. Not only is it the nation’s only women-run outlet, but its staff is composed of so-called “untouchables.” So rather than use their voices to provide political propaganda, they hold feet to flame.

Already surviving 14 years longer than anyone besides its founders believed it could (not even chief reporter Meera Devi’s husband believes it will continue or “achieve anything” despite already achieving so much), the time has come to pivot from print to digital, the rise of social media proving too huge a landscape for reach and revenue to ignore. It means teaching their journalists how to use smartphones to film, compose, and file stories on-location while many are still learning the job itself. Growing pains are thus a forgone conclusion: some (like Suneeta Prajapati) take to it like fish in water, others (like Shyamkali Devi) struggle to process everything the field entails. With Meera’s support and guidance, however, anything is possible. Including one million YouTube views.

Why stop there, though? We don’t need a scene where male journalists tell Suneeta that she must bolster the egos of powerful subjects before daring to hit them with hard questions to know that the Indian media is bought and sold. The same goes for a moment where a community fighting to repave their mafia-ruined road assumes she’s going to ask for a bribe before even thinking about covering their story, despite her being there and trying to do exactly that until their interruptions. It’s precisely because this paper is dismissed and undervalued by those in control of the country that they can do the job as it was intended to be done. They operate with integrity and a clean revenue stream to fearlessly seek the truth.

It earns them trust amongst the Dalit community, knowing they will report what’s happening regardless of outside pressure. It also guarantees that their stories stand out from propaganda to be picked up by larger publications that ultimately expand their reach beyond their geographical borders. And what they’re doing works. We’re made privy to countless examples of their reporting creating concrete change within days of going live simply because they had the courage to speak when others wouldn’t. We’re talking about raped women being ignored before Meera steps in. Threatened families endangered by gangsters. Corrupt police officers sitting on their hands because no one dared make their ineptitude public. Khabar Lahariya is a beacon of hope that democracy still exists despite current national leadership working against its freedoms.

That’s where the Hindu nationalism comes in and the reality that most news sources in the region act as a mouthpiece for those in power rather than a voice of the people. It’s not even a question of who’s best to represent the Dalit people in their fight for respect and dignity (one story renders the government’s statements of every home in India having a toilet false) since no one cared enough to even try before these women decided to speak for themselves. Doing so is difficult beyond politics (40 Indian journalists have been murdered since 2014), though, since these are career-oriented women in a repressively patriarchal society daring to unapologetically act outside caste and gender. Internet trolls, religious abusers, and family members demand they stop.

Shyamkali relays a story about telling her husband she’d leave him before her career. Meera’s husband constantly brings up the fact that she should be running the household instead of working as if doing so from his chair does anything but prove his only reasoning is that he doesn’t want to have to pick up any slack. Suneeta doesn’t even want to get married as a result because doing so would risk the freedoms single living affords. Her parents begrudgingly agree—families willing to let her work post-marriage demand too high a dowry (her father asks why men want an uneducated woman if they refuse to then let her use that education), but how long can that last when late nights bring rumors of prostitution and dishonor?

You can’t help be inspired by their courage under fire from all angles. Seeing these women smile in the faces of men telling them what they’re doing is wrong or refusing to understand the nuance of something as simple as filler shots for professionally edited interviews is as potent as them giving each one the middle finger since their presence in the news world is that and more on its own. And by following Suneeta’s meteoric rise and Shyamkali’s more gradual ascent, the filmmakers can expose just how good Meera is at leading by example and through effective lessons to better those around her, ultimately helping achieve their common goal. They gain confidence. Government officials experience accountability. And the YouTube views keep growing.

Writing with Fire is now in limited release before airing on PBS on March 28, and arriving on Digital HD on March 22 and DVD on April 26.