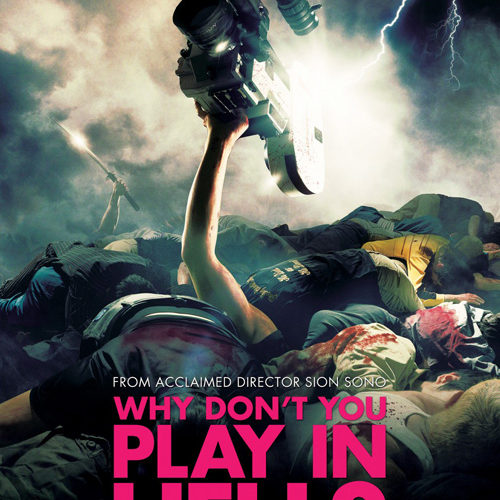 [Review] Why Don’t You Play In Hell?

Excessive doesn’t begin to describe Why Don’t You Play In Hell?, Japanese director Sion Sono’s action comedy that focuses on two gangsters and an aspiring director. Jam packed with shoot-outs, katana battles, and martial arts, the film culminates in a sopping wet mess of blood, sweat, and vomit, but not before making the viewer earn it.

A considerable setup follows two parallel storylines – that of Hirata (Hiroki Hasegawa), a mad and determined teen filmmaker, and Muto (Jun Kunimura), a yakuza boss whose beef with a rival clan results in the incarceration of his wife Shizue (Tomochika) and the end of his young daughter Mitsuko’s (Fumi Nikaidô) acting career. Ten years pass, and, as literal fate would have it, Muto recruits Hitara to direct a bankrolled project starring Mitsuko in the lead role. Recognizing a once-in-a-lifetime opportunity to produce his masterpiece, Hirata emphatically agrees to use an upcoming raid on Muto’s nemesis, Ikegami (Shin’ichi Tsutsumi), as the film’s backdrop. Chaos, as they say, ensues. Before the bizarre Let’s Put on a Show climax can happen, however, numerous overly long, dialogue-heavy scenes divert the plot from gaining steam and barreling forward. The superfluous material renders the experience tiresome at times, as the sporadic stop-and-start pace often slackens, only to jerk back into crazy mode when one of the many brawls begins. A lengthy running time – over two hours – also becomes trying as it crawls toward the anticipated final spectacle.

The better moments achieve an over-the-top, unbridled energy through a frenetic array of aesthetics and performances. The players throw themselves into their roles by mugging, screaming, and emoting with wild abandon, but it’s Tsutsumi who charms the most in his turn as the commanding, kimono-wearing traditionalist Ikegami. Sono ramps up the zaniness by employing long tracking shots, trippy fantasy sequences, cartoonish CGI, and other techniques that elevate the violent antics and call attention the film as a tribute to action cinema greats. A series of fast cuts simulates the editing of Akira Kurosawa, while a quick zoom in on an actor’s face recalls the camp style of kung fu films (that the actor is also wearing a bright yellow jumpsuit helps).

Defined by a sanguineous sense of humor and unpretentious spirit, Why Don’t You Play In Hell? makes for a stylish, self-aware, if somewhat lagging romp about film culture and creative ambitions.

Why Don’t You Play In Hell? is now in limited release.