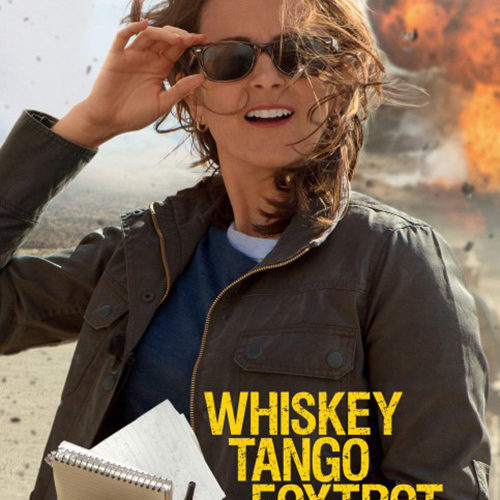 It’s startlingly easy to forget that America is still at war, and while the minutiae of the definition has shifted with the decades, it’s a persistent influence on our view of present and future foreign policy. Glenn Ficarra and John Requa’s Whiskey Tango Foxtrot is emblematic of this reality, but for all the wrong reasons.

Adapted from Kim Barker’s book, “The Taliban Shuffle,” which follows Barker’s time as a foreign correspondent in Pakistan and Afghanistan, Whiskey Tango Foxtrot is a galling, casually offensive, and deeply unsatisfying film. The story establishes Barker (Tina Fey) as an office drone at an unspecified outlet, bored senseless by her life until she’s selected as a potential correspondent for Afghanistan thanks to her unmarried, childless status.

Soon she’s flying to meet her fixer, Fahim Ahmadzai (a capable, but nonetheless symbolically brown-faced Christopher Abbott) in Kabul, and meeting a cast of oddball reporters, led by Tanya Vanderpoel (Margot Robbie). She’s a career reporter who’s unashamed of her sexuality, which would be fine if it didn’t only seem constructed that way to contrast Fey’s typecast role as the eternally prudish, put-upon feminine heroine.

Initially chided for her poor instincts (carrying around an orange backpack in combat situations), Barker soon shows her brute impulsivity, juking around soldiers during a firefight to film returning machine gun fire and ingratiating herself to General Hollanek (Billy Bob Thornton, whose gruff comedic stylings meld better with the tonal switches than maybe anyone in the entire film).

Whiskey Tango Foxtrot fares far better as it accumulates experiences for Fey, and while none of the scenarios are particularly funny or clever (a short extended gag about a well at least feels thought-out beyond a punchline), the actress nonetheless feels entirely convincing as someone who wants to chase the high that comes with reporting in dangerous situations. Fresh off the continual kick of these stories, Barker is trying to convince her stateside editor that Afghanistan is worth covering. Reflecting modern blog culture, Afghanistan has become a land of “firsties,” journalists sprinting to each new ground zero of a suicide bombing in the hopes of capturing some unseen carnage for the network.

Scripted by Robert Carlock, who’s best known as a regular collaborator with Fey for Unbreakable Kimmy Schmidt and 30 Rock, he runs into his usual problems with racial politics, as were endlessly documented with last year’s “Dong” problem. Whiskey Tango Foxtrot fails in more egregious ways by resorting to the easiest Middle East stereotypes since You Don’t Mess With the Zohan.

That film at least knew that they were lampooning the culture from the first moment, but this one always has one foot in sober reality, making scenes like a montage of men leering at Fey in a burqa into a piece of satire/commentary that’s particularly sour. The portrayal of Eastern traditions from a Western perspective is undoubtedly a rickety tightrope, but this is built on faux-political correctness, pushing forth a sense of individuality, but generally sneering at the way these other countries talk to each other. There’s a way to handle these contexts without merely making American people “white knights” to another country.

It’s not just that the comedy is aiming below the belt ninety percent of the time, but that the space between the jokes brings attention to just how often the comedy doesn’t work. 30 Rock and Unbreakable Kimmy Schmidt were never exactly hitting with perfect consistency, but without the gattling gun gag style, Whiskey Tango Foxtrot feels stranded until the next beat.

Carlock, who has previously shown an ideal skill for writing tight-knit friendships, does find room for little character touches, especially in the friendship with Fahim. A moment where she falls asleep on his shoulder works well, and Barker’s relationship with Tanya has a compelling spark of sisterhood. Then again, that doesn’t exactly excuse that much of their time together consists of jokes about the dowdiness of Fey’s character or the strangeness of the country.

The cast is also a mixed bag. Martin Freeman stands out, but more by the sheer force of the script shoving him in the audience’s face than his own momentous charms. As the foul-mouthed, sexually ravenous Scottish photographer Iain, he’s not exactly the person you want to take home to mom and dad, but he’s nonetheless shoehorned into a romantic subplot that mostly works, even if the seams feel freshly duct-taped to the main narrative.

This is a recurring pattern of the script: introducing characters who have narrative purpose, but rarely work as their own character. Aside from another situation of brown-facing, Alfred Molina’s Attorney General just doesn’t have much to work with other than an aggressive desire to sleep with Fey’s character. Like many of the principal characters, he disappears into the background for large stretches until the plot decides to bring him back for inane reasons.

By the end, Whiskey Tango Foxtrot has done little more than reinforce our most tedious biases about Eastern people and their differences, personifying their culture into little more than a dangerous thrill ride for journalists willing to strap to tell the tale. This is an important story to tell in showing the indoctrination to adrenaline and the experience of this incredible journalist. But especially in a domestic bookend, it seems to have taken away all of the wrong conclusions about Barker’s myopic viewpoints, at once undermining the film’s experiences, and patting itself on the back. The war has helped and hurt the Middle East, but it doesn’t matter when films can’t stop looking at it through America’s own canted, privileged viewpoint.