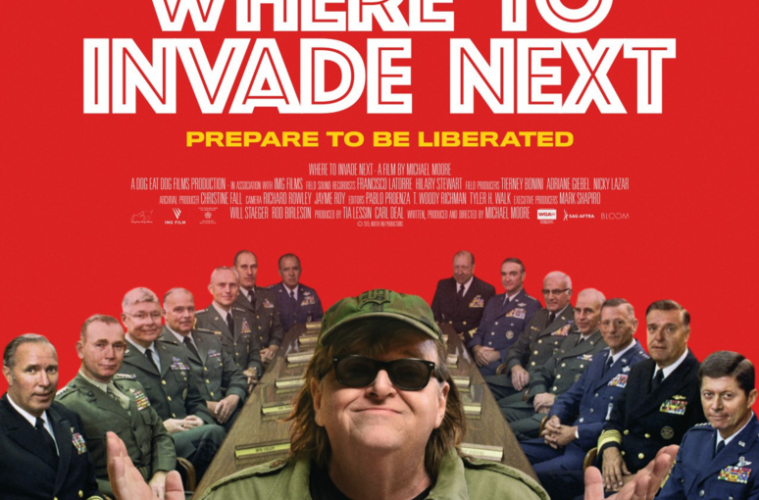 [Review] Where to Invade Next

Say what you will about Michael Moore — as if it hasn’t already been said, and not at all from a single side of the two-party battle line — but the man knows how to fashion viewpoints and distribution methods into a fine point. Six years after Capitalism: A Love Story, the documentarian brings Where to Invade Next, a feature that will first play as thoroughly familiar to any of us who can envision his work at the drop of a hat. Give this a bit of time, though, and it becomes clear that he’s found a way to expand his interests. At play here is a multi-part (some would say shotgun-spray) outline that combines the common Moore question (what is a particular American system doing wrong?) with a query about how — not if, and only in a certain sense why — other countries are doing it better. Rather than the standard procession of interviews, clips, documents, etc. revolving around one pressing matter, Invade uses a pressing matter as the springboard for a greatest-hits collection. Violence! Education! Institutional corruption! Factory conditions! The doings of politicians! You probably had some vision of what you would be getting when you heard Moore made a new feature. This time, you’ll be getting it in spades.

And so his first film of the 2010s is distinctly a product of this time, operating not unlike a moving, talking version of watching kind-hearted Upworthy videos in-between checking Facebook to find a “fiery” — but also funny! with jokes! — article shared by that well-intentioned, overly zealous person who’s kind of, sort of your friend. I only say “not unlike” because Where to Invade Next, contrary to my proposed metaphor, isn’t always a nightmare of hot-topic liberalism. For all the half-hearted assumptions, eyebrow-cocking suggestions, and holes that one could / should poke in its logic — this is a film that briefly suggests Iran might have a commendable government because they fund stem cell research — it’s, in Moore’s fashion, made with enough non-superficial craft and sense of aesthetic pleasure to coast for a bit. (It doesn’t hurt that nearly every minute acts as a travelogue-of-sorts for its beautiful shooting locations.) And, yes, the possibilities of its proposals are intriguing — just not so probable in and of themselves.

Though that pleasure underlines the key fault. Moore’s visits to the several European countries are cherry-picking right from the outset: getting his point across in a 110-minute movie will require that the chosen places (ostensibly) have a better order of things than the United States, and to ignore the narrow focus of each individual section becomes increasingly difficult as their similar conclusions pile on top of the last. Where there should be a sense of expansion — one possibility opening up after another; better education leads to better work leads to better government leads to… — there’s the suspicion that we’re witnessing a great contraction. Is education in France as superb as the highlighting of one school and the brief mention of two other institutions are meant to suggest? Are the fine working conditions in this one Italian factory and the happiness of the handful of interviewed employees proper symbols of this country’s shining success? Provided in these investigations are specific models of behavior that neither can nor should be ignored, but the movie so holds up these places — places Moore likely scouted out, researched, and then decided to document for the sake of his thesis — and moves so quickly among the many facets of an institution, then to the next issue, that we’re not so much encouraged to make decisions as we are to swallow viewpoints.

Most, myself included, will learn things from the experience, and those who agree with his stance that things need to change are likely to be compelled by the utopia-like world presented. But this is agreement, not argument, and with this realization come more questions that Where to Invade Next, so convinced of its position, doesn’t bother to delve into just a bit further. Danish prison systems do have a lower retention rate than the United States, so why not take more time to highlight this? Or why does one person in a foreign country get to speak for the cultural consciousness of her population? I’m willing to listen when sources are provided, and it’s not unlikely that Moore, no idiot, might have benefited from expanding segments into fuller pieces of work — certainly more than the bite-sized facts that hew closer to a “You Won’t Believe” article than thorough reporting.

Whereas his previous films were exhausting for how much time they spend in one corner, this is comparably relaxed. What hasn’t changed is the comical tone in the presentation of material, which means you can expect montages of bad American behavior set to an upbeat pop song — albeit more elegantly and, I think, more pertinently to the subject matter than, say, the abhorrent “What a Wonderful World” sequence in Bowling for Columbine — and punchy clips from old movies or TV shows, as well as his “dumbfounded” face when a question he teed up is answered as he wanted it to be answered. (Despite his claims that this shock is genuine, the man doesn’t strike me as an outstanding thespian.) Whatever fatigue one could very well feel with the decades-old house style, it’s nevertheless clear that Moore knows a thing or two about montage as a tool for instilling ideas, just as his understandings of pacing and structure allows them to flow into and out of scenes without raising too many in-the-moment questions of authenticity. Those come later.

Perhaps his greatest skill is presenting a generally affable personality that’s endemic to the streamlined filmmaking, the pair forming a conduit for swallowing failures and atrocities with little pain. This is no small feat, and whether it’s a credit to the presentation of ideas or the undeniable comfort that comes with having my own beliefs being catered to, I don’t know, but I hold out hope that the changes Moore proposes — what I think Moore, for whatever opportunism his approach sometimes reeks of, really wants to see happen — find a way to take root. If history is to judge, however, the cooing “hmms” and knowing laughs of the New York audience I saw this with are about as far as things will head. It might be said that this outlook is exactly why there won’t be a change — because we should try harder. Moore would’ve been well-off pushing things a bit further on his own end.

Where to Invade Next has a one-week awards qualifying run on Wednesday, December 23, then enters a wide release on Friday, February 12.