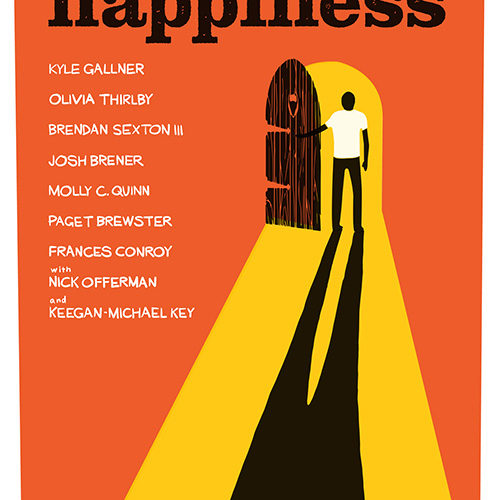 When you think of short stories like W.W. Jacobs’ “The Monkey’s Paw” or Richard Matheson’s “Button, Button” (adapted to the small screen for The Twilight Zone and big for Richard Kelly’s underrated The Box), dark images of death are conjured. The consequences of earning personal reward come at great cost to those you may or may not know. They concern selfish acts that will incite chaos and a purveyor of their too-good-to-be-true opportunities who relishes in watching the destructive path cut by fate’s unyielding need to balance the scales explode. But what if this story was flipped? What if instead of supernatural dread at the hands of a grotesque figure seeking moral bankruptcy, the chance to alter destiny came from a sweet elderly couple with God-like omniscience?

Enter Oliver Thompson, the first-time writer/director of Welcome to Happiness. While the title is most definitely a philosophical metaphor for the state of euphoric understanding experienced by all who enter a small, mysterious door in the closet of children’s book author Woody Ward’s (Kyle Gallner) apartment, it also reveals an actual place existing between realms of a Heaven-like utopia and a greenery-infused suburban desert locale whose inhabitants act as though they are on a healthy dose of lithium 24/7. Happiness is a state we all strive to accomplish and as such it is also a state we constantly find ourselves sabotaging. Quick bursts of joy arrive with reckless abandon to risk consequences we may never recover from unless a higher power deems our suffering worth repair. This is why strangers darken Woody’s door at all hours of the day with only the ten seconds or so warning courtesy of a dot matrix printer whirring to life. The page that’s printed has on it three questions: one a precognitive Mad Libs about being rewarded, one a personal tidbit to be expanded upon, and the last a hypothetical without context. Once answered Woody will place a rock in your hands and ask you to close your eyes to think about it changing into any color — generally a hue associated with a horrifyingly traumatic experience from your past. If a second rock hidden away turns that color you are granted access through the aforementioned door. Woody doesn’t know where it leads and he’s never asked.

But fate is never to be overshadowed by free will for too long so Woody’s blind allegiance to the printer and his landlord Moses (Nick Offerman) soon gets uprooted by the opportunity to learn about the power he has slept ten feet from for so long. Suddenly he wishes to enter that door so immensely that he lets the jealousy ruin the happiness he believed he had attained: a successful career under the tutelage of his agent (Paget Brewster), a burgeoning romance with neighbor Trudy (Olivia Thirlby), and the selfless joy of seeing people with obvious pain in their eyes receive a gift we cannot begin to fathom. He has for all intents and purposes started to question God, a rabbit hole leading towards an existence without purpose. While Woody is the lead to what we believe is his story, however, there are many more players involved to show that Welcome to Happiness truly is about the door itself. We meet these periphery characters without warning — a technique I’ll admit proves annoyingly jarring. Thompson leaves many explanations off the table to drop us into the tale without an idea of what’s happening besides knowledge that everything will eventually converge. Even though the synopsis explains that the door allows the person who enters a chance to change a past regret, the film doesn’t actually tell us this until more than halfway through. Instead we just go along with the weird circumstances. We meet new people and file them away without knowing the cabinet to which they belong.

This is frustrating. After spending ample time with Woody we’re whisked off to Nyles’ (Brendan Sexton III) dimly lit abode as he weighs suicide. Then we’re transported to Ripley (Josh Brener) looking forlornly at a fortune cookie with the same sentiments his father wrote in his eighth birthday card. Thompson is definitely all about the Wes Anderson quirk with more than one slow-motion sashay of characters against a hipster-lite soundtrack drowning out ambient noise, but these interjections of strangers go beyond quirk into confusion. Nyles and Ripley eventually connect via a rare baseball card with emotional significance and plot progression necessity. And we inexplicably find ourselves in a house with bubbly Lillian (Molly C. Quinn) and congenially aloof Proctor (Keegan-Michael Key). Getting lost is unavoidable. I believe this sense of disorientation is Thompson’s goal — throwing us off the scent of a plot device we couldn’t begin to guess even if we wanted — but I’m not sure the payoff is worth the irritation. I blame how cutesy the whole becomes because I found myself rolling my eyes more than intrinsically caring about the figures on-screen. To me the puzzles were more interesting; Easter Eggs like a missing “D” block on Lillian’s shelf or a Monet book on Proctor’s floor. I poured over the duplicity of objects so vehemently that I forgot there were actual people involved with tragic pasts who as yet hadn’t been invited through Woody’s door. To its detriment the characters became less important than the ways they fit together.

So despite enjoying the device and Thompson’s ingenuity to keep its cheery version of The Box obscured (cheery when not condoning murder as a “necessary evil”), I couldn’t quite forgive the distance built to keep me from investing in the characters. They’re intentionally created as pawns in a system; two-dimensional case studies if you will. We learn how moving on from tragedy is better than living inside your head with hypothetical ways to do it differently — an important notion to accept before achieving the happiness you deserve. Some people simply need help escaping this purgatory and that’s why Claiborne (Frances Conroy) and Osmond (Robert Pike Daniel) exist. I only wish I cared about those being helped as much as I did the way in which they were.

Welcome to Happiness hits VOD and limited release on Friday, May 20th.