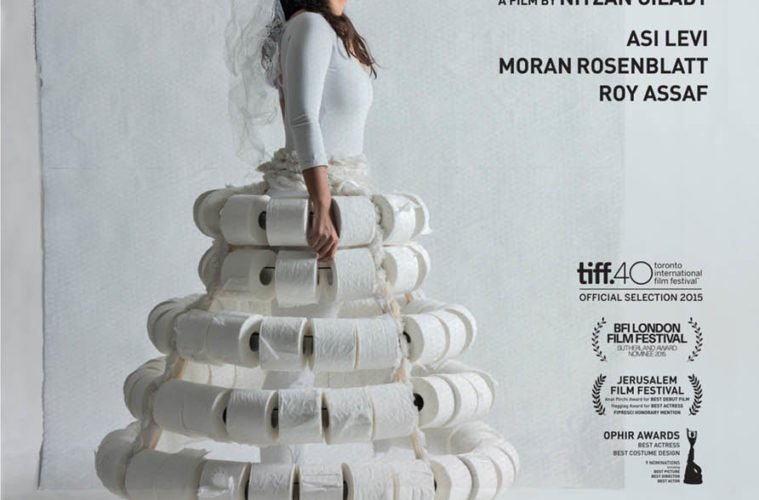 The main character of Nitzan Gilady’s Wedding Doll is a common character archetype, but one that’s rarely given the opportunity to be a lead, and even more rarely placed into a potential romance. Hagit (Moran Rosenblatt) is a young woman living in Israel with a mild mental illness that makes her appear slightly askew to those around her.

Hagit smiles a little too often, slightly stumbles over her words, and just appears a little bit too friendly to those around her. It’s not hard to imagine a version of this movie that plays out like Lucky McKee’s May instead of a romantic comedy sprinkled with social commentary.

It’s not just Hagit’s manner, but her pet habits that cement her reputation as an eccentric in the community. Her room is adorned with a wall of women in wedding dresses, and she spends much of her free-time making clay and toilet paper figurines. She’s also slowly nursing a romantic relationship with Omri (Roy Assaf), the son of her boss at a floundering toilet paper factory.

Sadly, she can’t tell that the romance is more of a flicker than a lasting flame – an interim distraction for Omri who has eyes for bigger things. But were it not for obtrusive musical cues and an initially artful reveal, it might be difficult overall to ascertain how much is textual and how much is insinuated in the relationship though. It’s continually unclear how much these characters actually know each other and what’s being lost in Hagit’s misunderstanding of social cues.

That’s a potentially engaging idea, letting the audience into the world through only Hagit, but the perspective continually shifts to deal with subplots that crowd that main storyline. Every time the story switches to Omri, for example, it focuses on him and his two lunkheaded best friends, and his relationship with his disapproving father, all of which don’t really go anywhere.

In-between, there’s also drama with Hagit’s divorced mother, Sara (Assi Levy), a women who feels deeply conflicted about her decision to devote her life to her daughter, and is having as many problems balancing work and a new boyfriend. Sara’s character is a bit thin, but Levy’s performance is the best in the movie, bringing forth the internal division of her character with subtly revealing pitch changes in her dialogue, and brief allusions to a past where Sara failed to protect Hagit.

Wedding Doll is the first non-documentary feature by director Gilady, and it just doesn’t seem to know how to handle Hagit’s arc, or even how other characters should act towards her. At times, it’s speckled with overly cutesy details, while other scenes seem unusually sadistic, as if the director was worried that Hagit’s portrayal wasn’t given enough emotional weight.

Rosenblatt is well-intentioned in her role as Hagit, but it’s just not a particularly memorable performance. It’s not quite shtick, but there is something in the performance that feels pushed a little too hard. The performance of mental illness is always tricky, and this certainly isn’t an I Am Sam-level situation, but there is something that feels distractingly artificial in the vocal delivery and inconsistent characterization.

Lensed by Roi Rot, the cinematography is crisp, and amplifies the organic negative space of Israel, but it’s also affected in a way that clashes with a script that’s generally unfussy. With its ponderous landscape shots and unnatural vantage points, the visual language often feels like it’s attempting to bridge the distance to a further meaning, and it’s just not on the screen. And while it’s understandable that techniques like rear projection are needed for some movies to tighten the budget, it feels particularly distracting in one extended sequence.

This transparency of contrasting elements is magnified by the frustratingly choppy editing and a poor sense of narrative construction. It’s technically sound, but every time the movie attempts to find a flow, it’s stuttered by a temporal jump or setting change that undermines the previous scene. The most inexplicable is related to a character beat that’s repeatedly discussed, only to be completely dropped at the tail end of the movie for a smoother third act. At only 80 minutes too, there’s a number of points, especially with a few perspective changes, that feel particularly disjointed.

The ending, as well, is poorly intentioned, placing Hagit into a situation where she must learn a lesson in a context that also simplifies a number of characters who were previously well articulated. In particular, Omri’s role in this scene is unbelievable as he lets the situation progress to a point where it doesn’t make sense in terms of either their shared past, or his own well-being.

Wedding Doll is notable in itself for attempting a story about mental illness that doesn’t center on the condition as the point, but that doesn’t help that the movie often feels like it’s at war with itself with the overcrowded script and incongruent camerawork. There’s a potentially good story to be mined here, probably most likely with the mother, but every time it starts to find fertile emotional ground, it can’t help but become distracted and search for another surface.